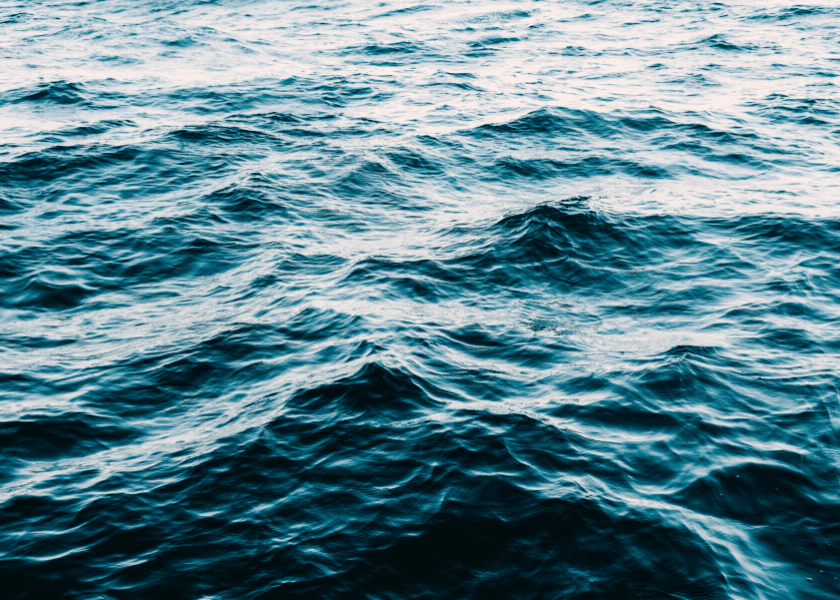 The Sea Around Us

The Atlantic Ocean has always played a big part in Bermuda’s development, from the earliest years when the Island was first discovered.

The limitations and opportunities afforded by the sea have molded the character of Bermudians, whose instinct for survival has endured down the centuries. In this, we take a look at the many ways the sea around us has shaped out lives.

Bermuda, with its balmy weather, serene waters lapping gently at attractive sandy beaches, and the silent beauty of its coral ecosystem, is a tourist haven of rare quality. But the Island’s story did not begin with a placid landfall onto a new land, but out of howling winds, raging seas and personal possessions hurled into a summer maelstrom.

“We were within seven or eight days at the most, by Captain Newport’s reckoning, of making Cape Henry upon the coast of Virginia when on St. James his day, July 24, being Monday, the cloudes gathering thicke upon us and windes singing and whistling most unusually… a dreadful storm and hideous began to blow from out the Northeast… swelling and roaring as it were by fits, some houres with more violence than others, at length did beat all the light from Heaven; which, like an hell of darkness turned black upon us.”

This narrative by Silvanus Jourdan and William Strachey presents a vivid picture of those last eventful days surrounding the Sea Venture, days which led to the opening chapter of colonization of an isolated island feared as a “Devil’s Isle” by most seafarers.

Although generally avoided out of superstition, and with dozens of ships known to have been wrecked on outlaying shoals- among them a Portuguese slaver, the crew of which managed to come ashore, salvage essential materials and build a new vessel-evidence suggests that French privateers familiar with safe passages through treacherous reefs used the Island occasionally as a base. One group rescued three marooned mutinees who had been abandoned sometime near 1556 by a Captain Mesmin.

The cartography and literature prior to the seventeenth century show that “La Bermuda”, as designated on a map in the 1511 first edition of Peter Martyr’s Legatio Babylonica, was well known to early sixteenth century Spanish vessels enroute from the Caribbean to Europe. Sailing northwards to seek favourable tradewinds at Bermuda’s latitude, they were acquainted with the islands described in 1527 by Herrera as being “a small island not very high, having a ridge in the middle and a vast quantity of land and sea birds… always covered with clouds.”

Almost four centuries have passed since the Sea Venture was shipwrecked, centuries that underline the rich heritage where Bermuda’s prosperity and culture are inseparable from the sea.

The staple food of those early settlers who established a permanent foothold in 1612, consisted mostly of fish, potatoes and a and a porridge made of Indian corn. Fishing, the first and oldest continuous industry, was the principle food source, leading inevitably to a whaling industry that although not as successful as originally hoped, resulted in the establishment of six whaling stations.

A letter written to King James I by the Earl of Northampton in 1612 enthusiastically describes the abundance of whales. “Whales there are in great store at the time of the yeare, when they come in, which time of their coming in is in Februarie and tarry until June. Likewise ther commeth in two other Fishes with them, but such as the whale had rather bee without their companie; one is called a Sword fish, the other a Thresher; the sword-fish swimmes vunder the whale, and pricketh him vpward; the Threasher keepeth aboue him, and with a mightie great thing like vnto a flaile hee so bangeth the whale, that hee will roare as though it thundered and doth giue him such blowes, with his weapon, that you would thinke it to be a cracke of great shot.” These early settlers hoped for rich rewards from whale oil and ambergris, but it was only in the latter eighteenth centuries that whaling became a lucrative although short-lived enterprise for a small group of whaling entrepreneurs.

As late as the early century, one notable whaler was Tommy Fox, a St. David’s Islander who continued to hunt the mammals long after the industry had declined. In 1940 a humpback was brought ashore where it was left to lie in the hot dun after being stripped of its oil and meat. Tommy Fox, then well into his seventies, and undeterred by the nauseating stench that repelled the curious, poked the whale’s interior and remarked, no doubt with some nostalgia, that “I sure do hate to leave this nice smell.” A devout church-goer, he once crawled into the belly of a sperm whale to illustrate the disbelievers the Biblical story of Jonah.

For centuries St. David’s islanders established reputations as fine fishermen, whalers, boat-builders and net makers, and although today such activities have largely ceased the culinary heritage of these people of India ancestry shows a flair for the making of seafood dishes, including turtle soup, conch stew, and fish chowder, prepared from old family recipes.

Those new settlers struggling to eke out a living on an Island so far from the mainstream, found the going difficult, and there was always the fear of attack by Spain which took a jaundiced view of a British colony living so near their treasure route.

Governor Richard Moore, sent from England in 1612, to oversee the Island’s protection, embarked on a diligent fort-building programme. Raising two cannon from the wreck of the ill-fated Sea Venture, he mounted them at fortifications erected at the East End to protect the entrance to St. George’s.

As anticipated, the Spanish sent two ships to reconnoitre the new colony, but two discharges from one of the cannon discharges from one of the cannon discouraged further curiosity and they sailed onwards. Over the succeeding years a total of 55 forts were erected, and although a few of these remain as reminders of the period and are historical and tourist attractions, most have deteriorated and disappear.

But the firing on Spanish ships was only the preface to future hostilities between Bermuda and Spain.
When the profits from a dwindling whaling industry declined early in the eighteenth century, the colonists looked southwards to the vast salt deposits on the Turks Islands. Seizing opportunity, Bermudian salt rakers harvested these deposits and traded the salt at mainland ports for flour and other essential items. Their enterprise infuriated the Spanish, who in 1710 mounted an attack, captured the Bermudians and took possession of the salt piles.

But these hostilities would not go unchalleneged.

The tiny colony immediately sent out an avenging expedition under Captain Lewis Middleton to rout the Spaniards and restore control of profitable business. The Spanish were sent packing and Bermudians resumed their salt-raking efforts, but for several decades afterwards they were subjected to intermittent attacks.

Bermuda’s geographical location gave rise to strategic considerations by the British, particularly following the American War of Independence when England was left without a Western Atlantic base. Shortly after France declared war with Britain on February 1, 1793, Captain Andrew Durnford outlined to the House of Assembly the military necessity of bolstering the Island’s defences. The Admiralty’s decision to construct a Royal Naval Dockyard at the West End resulted in its establishment in 1809. The presence of this base at Ireland Island gave rise to appellation “Gibraltar of the West”, and its development proved
valuable to the French, who were a persistent threat to British seapower.

Privateers were active throughout the Atlantic and Bermudians, again quick to respond to opportunity, turned to the hazardous though richly rewarding enterprise of privateering, counting among their prey French vessels carrying French citizens feeling the turbulent crisis in their Haitian colony. The fortunes of many local families were built as a result of privateering and Bermudian boat-builders excelled. Their small, copper-keeled sloops were renowned for their swiftness, and during the American revolution some 20 of them continued to be used as privateering vessels. So successful were they that in one month, September 1782, they captured 20 prizes.

During one Caribbean foray in 1799,m Darrell Harvey’s 120 ton sloop crewed by 125 Bermudians succeeded in bringing 18 French prize back to the colony. For some, a taste for full-blown piracy took them far afield, and one of them, Nathaniel North, retired to become rajah of a colony in Madagascar.

But ever restless and with a burning desire and affinity for the sea, Bermudian shipbuilders built some of the finest clipper barques between 1853 and 1864. The most famous, Sir George Seymour owned by the Watlington family, made a 13 day run from Bermuda to Cork, Ireland, establishing a new record.

With no cessation of their sailing proclivities, Bermuda’s seamen sold their services as blockade runners to the Confederacy during the American Civil War, and despite the racial and political climate within the Southern States, many of these crewmen and pilots were black Bermudians attracted by the substantial rewards. Captains earned as much as $5,000 for a round trip to the Wilmington and crewmen heedless of the risks were also amply paid.

The war’s end signaled the demise of another lucrative endevour which had been a boom not only for seamen, but for the St. George’s merchants as well. Blockade runners anchored in the town’s harbour as crewmen came ashore to spend and drink freely, giving the merchants a welcomed financial boost.

Once again Bermuda’s seamen returned to more sedate commercial activities. However, just as merchantmen had much earlier dissuaded local privateers, the advent of steamships spelled the demise of local shipbuilding as a viable industry.

The middle nineteenth century saw the beginning of the establishment of several yachting and sailing clubs.. The Royal Bermuda Yacht Club, the oldest such yacht club on the Island, was formed in 1844, followed 38 years later by the Hamilton Amateur Dinghy Club. Both clubs along with one or tow others have initiated programmes for boys and girls interested in boating and sailing.

The natural affection help by Bermudians for the sea is witnessed in the extraordinary number of pleasure craft seen either lying at anchor within the Island’s peaceful bays and harbours or sailing calmly offshore. And there is a plethora of water sports from swimming to snorkeling and scuba diving, boating and windsurfing, engaging all ages and segments of society.

With windsurfing regattas, and competing powerboats roaring through the placid waters at Ferry Reach each year, non-participants readily gather at onshore vantage points to enjoy these and other sailing competitions.

More than 30 international Game Fishing association records are held for fish caught off Bermuda and the five local game fishing clubs compete each year. The penchant for the sea and activities surrounding it are an aspect of Bermuda’s heritage that shows a yearning, an appreciation, a love for the ocean that entices youngsters and men down to the water towards the horizon, It’s freedom and accomplishment. It is pleasure taken in tradition.

And as it was when early settlers turned to the sea for sustenance, so it is  today for the Island’s commercial fishermen continuing to pursue that tradition. Perhaps the most succinct and simple declaration of the effect of the sea on Bermuda and Bermudians was made almost 50 years ago by Charlie Ball. A local fisherman of his day. “Next to fishing, I like to sit and look at the ocean. There ain’t nothing like it.”