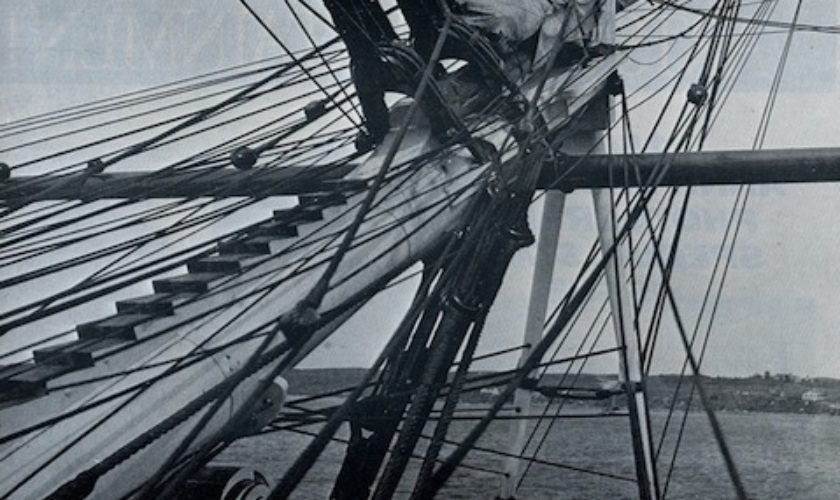 The Story of Sailing

James Thurber’s  “The Story of Sailing” was written for, and appeared in The Bermudian in June 1936. It has since been reproduced in journals of several other countries and in more than one anthology of humour. It seams to us a good idea to offer this learned dissertation yet once again.

People who visit you in Bermuda are likely to notice, even before they notice the flowers of the Island, the scores of sailing craft which fleck the harbours and the ocean round about. Furthermore, they are likely to ask you about the flowers and this, at least in my own case, is unfortunate because although I know practically nothing about flowers I know ten times much about flowers as I know about ships. Or at any rate I did before I began to study up on the subject. Now I fell that I am pretty well qualified to hold my own in any average discussion of rigging.

I began to brush up on the mysteries of sailing a boat after un unfortunate evening when a lady who sat next to me at dinner turned to me and said, “Do you reef in your gaff-topsails when you are close hauled or do you let go the mizzen-top-bowlines and cross-your-braces?” She took me got a sailor and not a landlubber and of course I hadn’t the slightest idea what she was talking about.

One reason for this was that none of the principle words (except “reef”) used in the sentence I have quoted is pronounced the way it is spelled: “gaff-topsails” is pronounced “gassles,” “close-hauled” is pronounced “cold,” “mizzen-top-bowlines” is pronounced “mittens,” and “cross-jack-braces” is pronounces “crabapples” or something that sounds a whole lot like that. Thus, what the lady really said to me was, “Do you reef your in your gassles when you are cold or do you let go the mittens and crabapples?” Many a visitor who is asked such a question takes the first ship back home, and it is for these embarrassed gentlemen that I am going to explain briefly the history and terminology of sailing.

In the first place, there is no doubt but that the rigging of the modern sailing ship has become complicated beyond all necessity. If you want proof of this you have only to look up the word “rigging” in the Encyclopedia Britannica. You will find a drawing of a full-rigged modern ship and under it an explanation of its various spars, masts, sails, etc. There are forty-five different major parts, beginning with “bowsprit” and going on up to “davit topping-lifts.” Included in between are, among others, these items: The fore-top-mast staysail halliards (pron. “fazzles”), the top gallant mast-yard-and-lift (pron. “toft”), the mizzen-topgallant-braces (pron. “maces”), and the fore-top-mast backstays and topsail tye (pron. “frassantossle”). The tendency of the average landlubber who studies this diagram for five minutes is to turn to “Sandscrit” in the encyclopedia and study up on that instead, but only a coward would do that. It is possible to get something out of the article on rigging if you keep at it long enough.

Let us creep up on the formidable modern sailing ship in out stocking feet, beginning with one of the simplest known sailing craft, the Norse Herring Boat. Now when the Norse built their sailing boats they had only one idea in mind: to catch herring. They were pretty busy men, always a trifle chilly, and they had neither the time nor the inclination to sit around on the cold decks of their ships trying to figure out all the different kinds of ropes, spars, and sails that might be hung on their masts. Each ship had, as a matter of fact, only one mast. Near the top of it was a crosspiece of wood and on that was hung one simple square sail, no more complicated than the awning of a cigar store. A rope was attached to each end of the crosspiece and the other ends of these ropes were held by the helmsman. By manipulating the ropes he could make the ship go ahead, turn right, or turn left. It was practically impossible to make it turn around, to be sure, and that is the reason the Norsemen went straight on and discovered America, thus proving that it isn’t really necessary to turn around.

As the years went on the and younger generation of Norsemen became, like all younger generations, less hardworking and more restless that their forebears, they began to think less about catching herring and more about monkeying with the sails of their ships. One of these restless young Norsemen one day lengthened the mast of his ship put up another crosspiece about six feet above the first on, and hung another but smaller sail on his new crosspiece, or spar (pronounced, strange as it may seem, “spar”). Thus was the main top-sail born.

After that, innovations in sails followed so fast that the herring boat became a veritable shambles of canvas. A Norseman named Leif the Sailmaker added a second mast to his ship, just in front of the first one and thus the fore-mast came into being and with it the fore mainsail and the fore top-sail.  A Turk named Skvar added a third mast and called it the mizzen. Not to be outdone, a Muscovite named amir put up a third spar on each of his masts; Skvar came back with a sixth, and so it went, resulting in the top-gallant foresail, the top-topgallant mizzen sail, the top-top-topgallant amil topsail, and the tip-top-topgallant-gallant mainsail (pron. “twee twee twee twa twa”).

Practically nobody sails a full-rigged seven-masted ship so that it would not be especially helpful to describe in detail all the thousand different gaffs, sprits, queeps, weems, lugs, miggets, lords (spelled “leewards”) gessels, grommots, etc., on such a ship. I shall therefore devote that space I have left to a discussion of how to come back alive from a pleasant sail in the ordinary 20 or 30-foot sailing craft such as you are likely to be “taken for a ride” in down here in Bermuda. This type of so-called pleasure ship is not only given to riding on its side, due to coming about without the helmsman’s volition (spelled “jibe” and pronounced, “look out, here we go again”!) but it is made extremely perilous by what is known as the flying jib or the boom.

The boom is worse that the gaff, for some people can stand the gaff (hence the common expression “he can stand the gaff”) but nobody can stand the boom when it aims one at him from the floor. With the disappearance of the Norse herring fishermen and the advent of the modern pleasure craft sailor, the boom became longer and heavier and faster. Helmsman will tell you that they keep swinging the boom across the deck of the ship in order to take advantage of the  wind but after weeks of observation it is my opinion that they do it to take advantage of the passengers. The only way to avoid the boom and have any safety while sailing is to lie flat on your stomach in the bottom of the ship. This is very uncomfortable on account of the hard boards and you can’t see a thing, but it is the one sure way I know of to go sailing and come back on the boat and not be washed up on the surf. I recommend the posture highly, but not as highly as I recommend the bicycle. My sailing adventures in Bermuda have made me appreciate for eh first time the essential wonder of the simple, boomless bicycle.