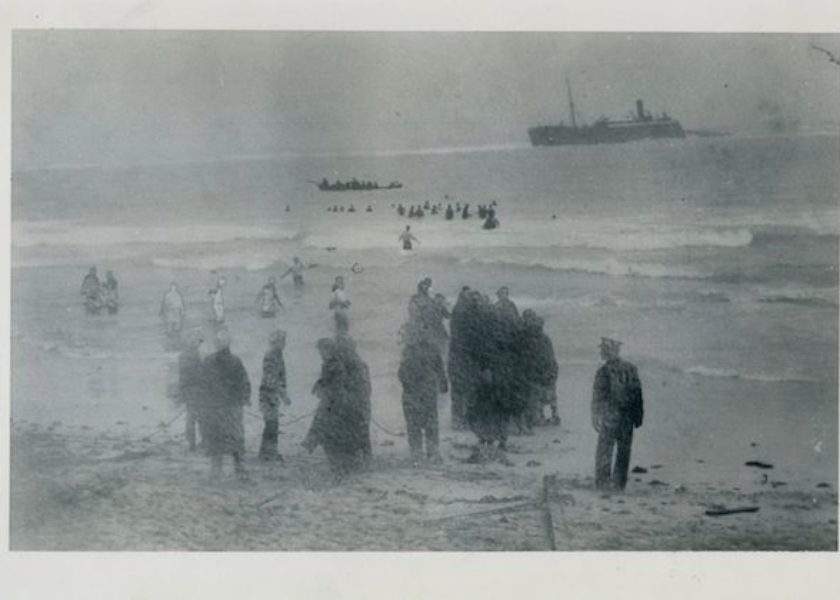 The True Story of The 1915 Pollockshields Shipwreck

Captain Boothe, his chair wedged between the bulkhead and the washstand, was too tired to sleep. He dozed, clutching the washstand so the ship’s roll wouldn’t pitch him to the floor. Hunger pangs twitched through his stomach. Boothe and the 33-man crew had lived on biscuits and water for days. Only yesterday the cook had scalded himself badly trying to make a pot of coffee. The cargo was safe enough now, although there had been some bad moments. The spare propeller, ten tons of cast iron, had shifted in the forward hold, and it took four men three hours to lash it down. Some ammunition crates had broken loose, too. That was a ticklish business with artillery shells tumbling about in the hold, but the chief officer and some deckhands had finally secured them.

The biggest worry that kept Ernest Boothe awake was their position. By dead reckoning he had figured last night that his ship, the Pollockshields, was 80 miles south of Bermuda, so he had changed course to the north. But where were they now? They couldn’t keep a steady watch on the compass at night because the lights were out. He had stayed on the bridge till dawn before he left for the chief engineer’s cabin. His own quarters were swamped. In spite of the beating she had taken for nearly five days, Boothe knew that the 25-year-old Hamburg-built ship could take it. Damn the Huns, but they built good merchantmen. Captain Boothe dozed again, holding onto the washstand.

The Pollockshields’ troubles began nearly a year before Boothe became her master. They started on a winter night in 1914 when three sleepy vice-consuls were deciphering codes in the British Consulate General in New York. Across the Hudson River they could see the big illuminated Colgate’s Toothpaste clock, hands pointing to 1:30. The three men glanced at the clock every so often, although they couldn’t leave until the work was done. Sir Gerald Shepherd, now a Bermuda resident, was one of them, and still remembers the occasion. “Somebody suddenly said, ‘Good God, there’s a ship going out!’ We could see the outline of the blacked-out vessel against the lighted clock-masts, funnel and super-structure. We wondered what she was up to, going out of New York harbor in the dead of night.”

They started checking. After 90 minutes of telephoning and calling on uncooperative American officials, they learned the ship’s name from a sympathiser to the British cause. She was the 323-foot, 2,753 ton Hamburg-America Line’s Graccia, stealing out of the neutral port to run for the Adriatic and safety.

The consuls cabled Bermuda, Jamaica and Halifax. Soon a wireless messaged cracked across the ocean to two British cruisers three miles outside New York: “Intercept.” The word came too late, and the blacked-out Graccia successfully eluded the cruisers and steamed toward Gibraltar. But now the Royal Navy was on the lookout and seizer her near the Rock. The captured ship was sent to Cardiff, renamed Pollockshields and manned by men from eight nations. Loaded with stores and munitions, she was despatched to the forces of Bermuda.

Today was Tuesday, September 7th, 1915.
Chief Engineer Fredrick Smith came in to wake the captain. “Had your breakfast yet?” He grinned and reached for a dry biscuit. “Where are we, Cap’n?”
Captain Boothe knuckled his eye and lurched out of the chair. “I dunno, Freddy. I wish I did. I better go on deck and—“
A seaman burst into the cabin. “The chief officer wants you on the bridge, sir,” he shouted. “Says there’s some queer-lookin’ water up ahead.”
Boothe jammed his cap over his eyes and clumped out. As he hauled himself onto the bridge, he could see a change in the water. In fact, that white stuff ahead looked like breakers—by God, they were breakers! “Hard a’ starboard,” he roared, but it was too late to turn about. Boothe grabbed the engine room telegraph and rang “Full stern.” The ship began to lose way, but the reefs were plainly visible now and disaster was inevitable.
“Edward,” he told the helmsman, “See that hole in the reef ahead? Steer right through, and we’ll beach her hard and fast.” He rang for full speed ahead.

Johnson, the chief officer, lashed down the whistle lanyard. The men on the bridge grabbed for support as the ship drive through the hole, struck a ledge, lurched upward and crashed bow on into another reef. The Pollokshields heeled over to starboard, fast aground some 400 yards from shore.

On shore Bert Johnson, owner of the South Shore Hotel (now the Elbow Beach Surf Club), heard that the Pollockshields’ siren, hitched up a horse and carriage and drove to Hamilton with the news. Hundred gathered at Elbow Beach—soldiers, sailors, Bermuda rifelmen, civilians. They could hardly see the ship for rain and spray, but they could hear the thundering breakers pounding the stricken ship.

Officers and men huddled on the port railing. Boothe checked their lifejackets. A fireman didn’t have one, so the captain went aft with Simpson, the second engineer. The officers each found a lifejacket. Boothe saw the ship’s cat in the storeroom and tucked him under his coat. The two men started back. A big sea swept the stern. Simpson grabbed a line and held on. Boothe and the cat went overboard. The crew could see the captain thrashing in the surf before he was sucked under a reef.

Johnson, now in command, broke out biscuits and water for the crew. The ship’s list prevented lifeboats from being lowered. Johnson’s signals to the shore were not seen until the afternoon. “Help is on way,” the reply came. During the evening, the Pollokshields began breaking up. With a rasping screech of tearing steel, the stern was torn away just abaft the engine-room and sank 35-feet to the bottom. The mainmast carried away with a crack like a cannon shot.

Men debated ways and means of rescuing the Pollockshields’ crew. Antonio Marshall, a barrel-chested farmer, provided the answer. Marshall had jumped a whaling ship in Bermuda when he was 14. He had spent five years at sea and knew only a long, narrow whaling boat could get through those seas to the wreck.

Captain N. E. Holmes, an old seaman, left the South Shore Hotel after supper and led 17 men across the island to Waterlot, home of Miss Claudia Darrell in Southampton. A whaleboat was moored in a cove nearby. Three men swam out to bring her to shore. Wearing boots and slickers, Miss Darrell helped the men load the boat between the trolley and box cart and gave the group coffee and sandwiches. They hitched up horses and started for Elbow Beach at one a.m. After a struggle lasting an hour and a half over rough, limestone roads and through drenching rain, they reached the beach. Wrecked littered the shore.

Swimmers helped launch the twelve men in the whaleboat at eight a.m. Marshall, who couldn’t swim, was at the steering oar. The boat got through the first breaking wave. The second caused her to broach and capsize. The swimmers saved them. The boat was slightly damaged. The storm abated a little and the boat was launched again at 11:30. This time it got through the surf.

The whaler was Brough under the lee of the Pollockshields, and crewmen cast her a heaving line. Wind carried it away. Thaddeus Basden, nicknamed “The Professor,” jumped out of the boat, swam to the line, and back to the whaleboat. A breeches buoy was rigged, and seven men transferred from the steamer.

The heavily-laden whaleboat had difficulty getting through the surf to shore. A group of swimmers, led by the Rev. Peyton-Burbery, a naval chaplain, carried the life preservers and lines through the waves for the survivors, and the exhausted crewmen were dragged ashore. Tumblers of whisky were thrust into their hands. His Excellency the Governor, Sir G. M. Bullock, shook hands with them and gave them coffee, and then carriages took them to the hotel.

Marshall steered the whaleboat back to the ship three times to recover the men and three kittens. Four more kittens were taken off the next day. By Sunday pleasure boats were doing fine business taking sightseers to the wreck.

The day after the rescue, officers and men were transferred to the Canadian Hotel in Hamilton. Captain Boothe’s body was washed ashore at Christian Bay, Southampton. Two weeks later a court of inquiry intimated that the Pollockshields might have been saved if Boothe had ordered full speed astern and dropped anchor when he first saw the reef. Today only the engine cylinders of the wreck are visible above water.

Antonio Marshall did one more favor for the men he helped to save. He hitched up his wagon, picked a load of watermelons on his farm in Southampton and took them down to the crew. The House of Assembly voted £75 to the men who manned the whaleboat and presented Marshall with a fat silver watch, which he wore proudly until his death.

Before the Pollockshields’ crew left the Colony for New York, four officers wrote an open letter to the Bermuda Colonist:

“Believe us, we will never forget you. Nowhere in the world could we have had a greater welcome. Ladies and Gentlemen of Bermuda, thank you, thank you from our hearts. We go back to England with the most grateful remembrances of Bermuda and Bermudians.”