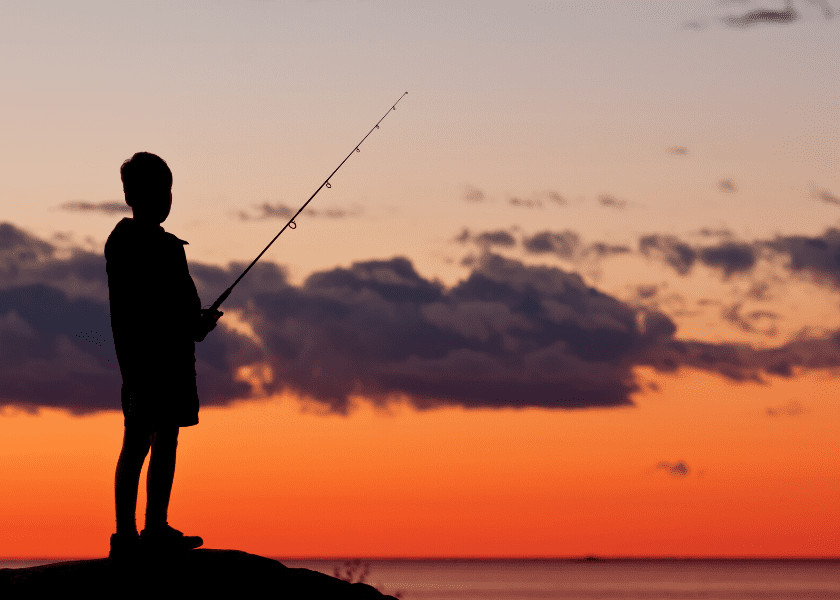 The information for the following story was furnished through the kindness of Mr. F. Goodwin Gosling. From our archives, this article first appeared in the September 1930 issue of The Bermudian.

Time—Any time in the early 1880’s, a moonlight summer night

A chubby, round-eyed little boy is seated beside an old man on the edge of the rock. The two are fishing. The old man is diminutive, with a long white beard reaching to his knees. He has the pointed ears of a lover of Pan, deep Pringle’s around his deep-set blue eyes, yet the hollow cheeks and tight lips of an ascetic. He has been talking to the lad at his side about the mystical theories of Swendenborg, of whom he is an ardent follower. The boys stirs restlessly after a while and asks a question.

“Captain, what was the biggest fish you ever tried to catch?” It was an old question, but there was always a varied answer that delighted him.

“The biggest fish I ever saw, the biggest of them all?

“Well, I’ll tell you about it, boy. When I lived over at the house back of the hill there, I used to come down here every night at six o’clock to fish, same as we’re doing now. One night I saw coming around the point over there a huge black head. It was an enormous jewfish. I ran to the house and got a boy to bring me a lot of bait. Then I threw it all in here and waited. The jewfish came and ate it up. The next day I got all the small fry I could find. Again I brought it down here and the jewfish ate it. Finally I got the fish quite tame, so he’d come around every night for dinner.

“Then I went to town and bough a hundred yards of six-penny rope, thick rope it had to be for a monster that size, and I got a new shark hook too. Over to Grape Bay there were camping a regiment of soldiers because of the yellow fever scare going round. I went and told them I’d need twenty-one men to come around the next night to help me catch a whale. I promised them all a big fish for dinner if they’d come and they were glad to. Then I fished up a twenty pound rockfish and put the long shark hook inside of it. But I only got a small amount of bait.

“Six o’clock the old jewfish appeared and my men were ready. There was a big cedar growing out of the rock there where that deep hole is now. ‘Listen boys,’ I said, ‘You’ll never be strong enough!’ so I tied one end of the rope to the tree, strung the rockfish on the other end with the shark hook inside him, and told them all to squat down directly behind each other in a row and make ready to pull hard on the end tied to the tree when I said the word. I wasn’t strong enough to do it myself.

“I threw in just a little bit of bait so the big fish wouldn’t be satisfied. He ate it all up in one gobble and looked around for more. Then I threw in the end of the rope with the rockfish on it. He grabbed it in his mouth and I told the boys to pull hard when I saw it was well inside. All those twenty-one men started pulling together. In the moonlight you could see that the hook had lodge in his opened mouth. Someone said they heard a church-bell clanging but it was only the striking of that hook against all the other hooks that had been embedded in his mouth when folks had tried to catch him before.

“But that wasn’t enough. The jewfish kept right on pulling. And then suddenly, he tired the great cedar tree, six inches in diameter, right up from that from that hole over there, roots and all, down the cliff and into the sea. And the last I saw of him was far out to sea, still towing that tree, and as far as I know, he took it down to Barbados or planted it in the bottom of the ocean.

“As though that weren’t enough, the next day the captain of the troops came over to see me. ‘Look ahere,’ he said, ‘last night twenty-one men came back from helping you, so scratched and torn up they’ve had to spend the day in the infirmary. And furthermore there are twenty-one sets of trousers with the seats town out and I want you to pay me ten shillings for each pair for damage.’ But I never saw that fish again. Yes, sir, he was the biggest I ever saw or heard tell of.

“I caught a funny shark once, though.”

“What was funny about it?”

“Well, I’ll tell you. A man and I were out fishing from Hungry Bay in about forty fathoms. I felt a tug on my line and pulled up. It was a big fish but he didn’t put up any battle at all. We got him up easy, and brought him alongside. Our boat was sixteen feet long and he extended out three feet further on each end, that makes twenty-two feet long. It was the queerest shark I’ve ever seen, long and thin, dreadfully thin, except for his stomach which was big and round like a balloon. I told my friend we’d best be getting ashore, we’d caught enough to make a good day’s haul in the shark alone.

“As soon as we landed I got out my knife and slit open the shark’s stomach. Stuck inside there was a large cask full of fish, the open part of it facing the shark’s mouth. He must have seen it floating around in the water from some schooner and swallowed it up crazily like all sharks do. No wonder he was so thin. Those fish inside couldn’t satisfy him. They were floating around inside there, alive as though they’d been in the sea. And there were enough of them to make a good day’s haul if we’d caught nothing else. I emptied them out and sold them all.

“Guess it’s time to go now, sometime I’ll tell you about my success in agriculture.”

“Please do, Capt, it’s not so awfully late.”

“Well, I’ll tell you just this one more. I had a house back there on the hill with some farm land and pigs and chickens. One of the old sows had just had a litter of pigs. I decided to plant some pumpkins and I went down to Wadson’s to get the seed. You get the best seed down there you know, this was certainly good. We planted it at six o’clock at night and I got the boys up at five-thirty as usual to go and see after the pigs. They wouldn’t find that old sow or her young ones anywhere. Suddenly one of the little boys came running up the hill his eyes as big as though he’d been frightened. All over the field the vines had sprung up over night, and were climbing the slope of the hill dragging the pumpkins along with them. Some of them were so large they couldn’t move.

“I heard a noise and looked around to see what it was. It seemed to come from a pumpkin. I found a large one nearby about ten feet in diameter. There was a hole in its side and when I looked in it I saw the sow lying there with all her little pigs around her. Then I remembered how crazy that sow was over pumpkins. She must have smelt them growing up in the night and come and eaten a doorway inside this one. Thousands of pumpkins all over the field none weighing less than a hundred pounds, and this one so big it held that fat old sow and her pigs. I always get my seeds down to Wadson’s now.

It was another time that the little boy brought a friend of his to go fishing with the “Capt.” Usually he came along, and the old man would talk as he pleased. But this time, when he started to tell one of his stories the outsider laughed. “The Captain” stopped and said nothing more the whole evening. As they walked home he drew his little friend aside. “Don’t ever bring along that lad again,” he admonished, and the boy never did.