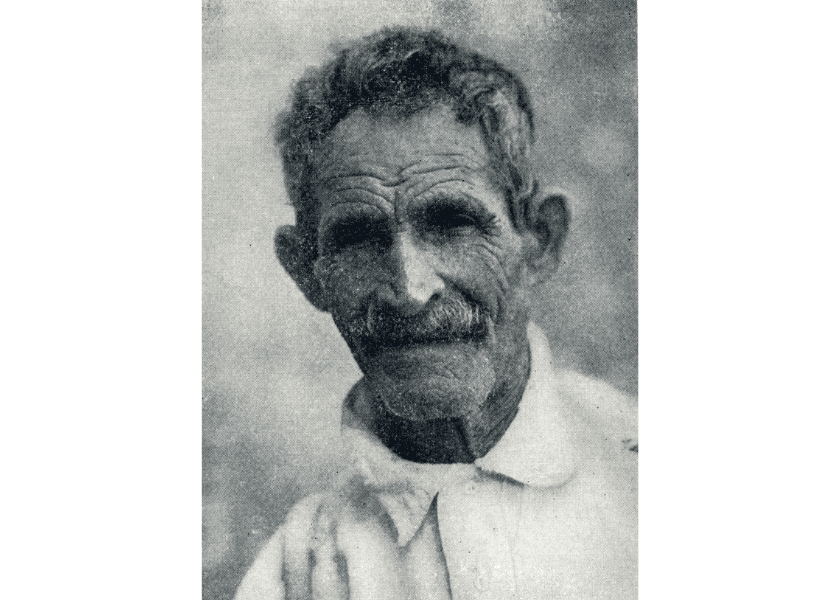 This article originally appeared in the December 1940 issue of The Bermudian.

In the parlour of his two-story home on the south shore of St. David’s Island, old Tommy Fox cleaned and pared his fingernails with a large fishing knife. Seated in a straight-backed chair propped against the wall, he rummaged painfully in the recesses of a failing memory, his faded eyes, the blue of seafarer’s, becoming puzzled and harassed as he tried to verify a date or recall the details of some episode of his life. Though no longer the robust virile figure so familiar to Bermudians and hundreds of visitors, his appearance and talk did nothing to diminish the glamour that has made his name one of the best-known and best-loved in Bermuda, and which has earned for the man himself the affectionate title, “Uncrowned King of St. David’s.”

Although Henry Mortimer (Tommy) Fox says he was born in 1861, he also claims he was married to Emily Lamb in 1886 when he was twenty-seven, which would make him two years older. This discrepancy I was unable to clear up, but seventy-nine or eighty-one, his years have been packed with activity and adventure. His father was a shipwright who, in the days of the American Civil War, piloted blockade runners and earned as much as $3,500 per trip. The three sons, Henry, Joe and Robert, learned their father’s trade until they reached an age when they had ideas of their own. They soon abandoned the trade of the shipwright for the more adventurous and colourful whaling profession, in those times one of the most lucrative in the Colony.

Numerous are the tales old Tommy can tell of whaling off these shores. On one occasion, in his own whaler, he was carried out of sight of land for six days, without food and only cold tea to drink. The tea was exhausted on the fourth day, but not Tommy. He pulled through this experience without any permanent ill-effects. He says, “I was thet hungry, if I’da seen a loaf of bread on the Guvnor’s table, I’da stole it.” For Tommy, this was a bold remark, for he was scrupulously devout and righteous minded, accepting the Scriptures quite literally in their entirety. For instance, when certain of his colleagues flouted the story of Jonah, saying that a whale could not swallow a man and that it was not possible to live in a whale’s belly anyway, Tommy set about giving them a practical demonstration that would prove them foolish unbelievers. A sperm whale was captured and its sixteen-foot-wide mouth propped open. Then to the delight of the immensely impressed onlookers, Tommy stepped between the cavernous jaws and slid down the throat into the whale’s belly. As far as he was concerned, he had proven his point and put no significance upon the fact that the whale had been slit open to permit of ready and speedy egress from the noisome interior. However, his experience convinced him that Jonah’s three-day sojourn in the belly of the whale was a “real Biblical miracle,” because “any man breathen in and breathen out eh same air is bounden to die after a while.”

The incident brought Tommy quite considerable renown abroad. Seward Toddings, editor of The Mid-Ocean, interviewed him for the famous Ripley’s “Believe it or not” radio programme as recently as May 1939. Hudson Strode and Carveth Wells tell tales of old Tommy in their respective books “The Story of Bermuda” and “Bermuda in Three Colours”. Numerous magazines and newspapers have published sketches of the old whaler. Fredric March, the motion picture star, said that before he came to the Colony he had heard so much about Tommy that he was the first individual he desired to meet. March tried to induce Tommy Fox to go out to Hollywood with him but the old man figured that it was “a little too fur” for him.

Both Tommy and his wife, Emily, are frequently annoyed on learning of apocryphal stories told about them. For instance, both Strode and Wells in their books tell of Tommy’s twenty-seven cats, which ghost-like, vanish at the approach of strangers but are devoted to the old man. Tommy insists that they’ve never had twenty-seven cats. They have, at the moment precisely three, which according to him is “two too many.” Writers have described an oven which Tommy built for his bride soon after marriage, and in which Emily still bakes her bread. Actually, Emily doesn’t use the oven any more, nor has she for a good many years. At the moment, it is little more than a tumbling ruin. To be sure, Tommy will have no truck with bakery bread to this day. He is convinced that it is bakery bread that killed off a flock of one hundred and fifty turkeys some years back. Bakery bread, says he with cold scorn, is fine for mopping up floors.

The general belief that H. H. Fox inherited all his property from his father is stoutly denied. His forty to sixty acres which make him the biggest landowner on St. David’s Island, were earned or acquired by himself, he asserts positively. Certainly, his father made a great deal of money in his day. However, in the absence of local banks, he entrusted his money to a man in St. George’s for safekeeping. The man, according to Tommy, kept it all right – for himself.

It is a long time since old Tommy made a specialty of cultivating arrowroot, another once-thriving Bermuda industry.

Tommy Fox was one of the first members of the Bermuda Volunteer Rifle Corps and was a sergeant in that body during World War I. He retired upon reaching the age limit. He is an ardent freemason and prizes particularly a watch in the form of the masonic triangle with masonic emblems in the place of numerals. This cherished possession was a gift from a Mr. Hardy, who had some connection with the Chicago Historical Museum, in appreciation of certain old whaling tackle which Tommy presented to Hardy for his collection. Tommy would never accept money for these old tools of his early profession, and some of his whaling implements form part of an exhibit in the Bermuda Aquarium Museum.

Tommy is very tall, very erect, gaunt with a shock of black hair in which threads of grey have only recently begun to appear. His face is almost mahogany-hued from exposure to salt spray, strong suns and high wind; it is lined and seamed and strong. He once objected mildly because a writer described his countenance as being “chiseled.”

Until ill-health restricted his movements, he attended church regularly and doubtless will resume this custom when he is fit enough. He is a rigid teetotaler and while he keeps ginger wine on hand for his visitors, he has never touched it himself. Once, when he was nineteen, he had a sip of beer, found it bitter and never tried it again. Once in a while he enjoys a pipe.

His opinion of the men Bermuda produces today is no more flattering than that of most old-timers anywhere. “You can’t find men anymore,” he will say contemptuously, “oney substitutes.” At one time, Tommy was a really fine billiards player. His uncle he says, was champion of Bermuda. But Tommy won’t play these days because, he claims, there is nobody left to give him a good game. Today his chief pastime is reading, and this he does so assiduously that he drops off to sleep and dreams about it. His chief interests are the Bible and the works of Shakespeare. He will talk familiarly about Job, Daniel, Elijah and other Biblical characters as though they were all his intimate cronies with whom he was in daily contact.

Old Tommy sticks pretty close to home these days, and rarely leaves St. David’s. “There ain’t no use goin’ to St. George’s no more,” he is apt to declare in a matter-of-fact voice, “There ain’t nobody there anymore.”

When last month Tommy Fox learned that most of St. David’s Island was to be utilized in the U.S. naval base about to be constructed here, he remained pretty close-lipped about his feelings. “I can’t say what I feel like saying,” he muttered. “I know what I’ve got to give. I don’t know what I’m going to get.”