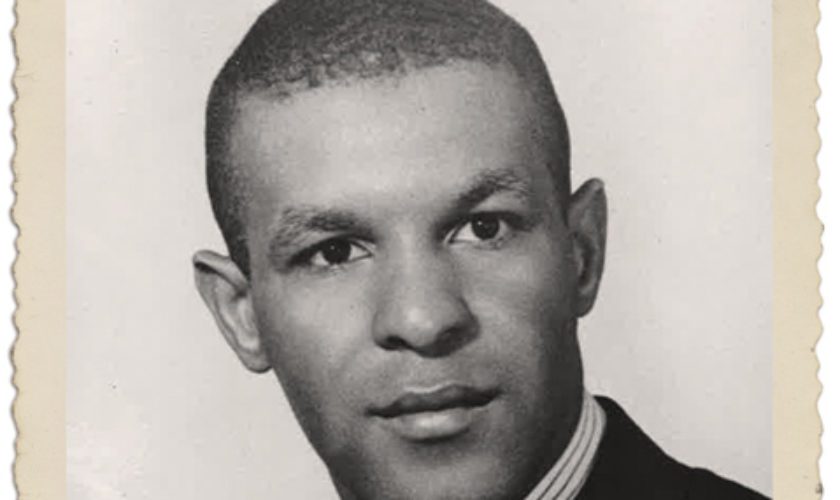 Where I Grew Up: Walter Lister, Sandys Parish

When James Alfred Lister left his country, the island of St. Kitts, in 1902 to sail to Bermuda, he embarked on a family journey far longer than the geographical one between two islands.

Travelling with him to Bermuda were his wife and family of five; the youngest, also named James, was just a baby. Because James Alfred was black, the only work available to him once he reached Bermuda was menial. He started to work for the Royal Naval Dockyard in Sandys Parish under the commander of the Royal Navy. Forty years later, on August 18, 1942, his grandson, Walter Lister, was born to parents James and Étoile while Dockyard was still run by the commander of the Royal Navy. One hundred years later in 2002, his grandson became chairman of the West End Development Corporation (WEDCO), the civilian organisation responsible for running Dockyard. Such is the stuff of family lore.

Walter, who has been a member of Parliament for Sandys Parish since 1976, remembers growing up in his father’s house on Heathcote Hill near Sound View Road in Somerset. “Before he got married, my father built the house for about £500 or £600 on land my grandfather had given him. When my grandfather worked at Dockyard, he painted bridges. At the time they were iron, so by the time he finished painting them, he’d have to start over again because of rust.”

In his spare time, James Alfred would also farm land and grow vegetables. “But,” Walter continues, “my grandfather would also grow Easter lilies that in those days were sold to the U.S. He would pack and box the flowers and somehow get them to Hamilton. An agent there would buy them and then send them to the U.S. It took him 18 years to buy that land on Heathcote Hill in 1920. I think it cost him something in the area of £100.”

That was a huge amount of money, considering his grandfather earned just 21 shillings—about $3—a week, and out of that wage he supplied food and clothing for his wife and seven children. “It was not easy. But my grandfather gave all his children, including his two daughters, different pieces of land.”

Later the Dockyard connection continued as Walter’s father became a Dockyard apprentice who worked there as an electrician until its closure in 1951. Then he retrained as a refrigeration mechanic and worked at the U.S. Naval Base on Morgan’s Point.

Meanwhile, Walter was enjoying his childhood in his parents’ house down the hill from his grandfather’s. He was the fourth of five children: Alan, Eugene, David and the youngest and only daughter, Joy. “There was lots of space for us. It was a very safe and very happy neighbourhood. We could wander all over the place. And the neighbours were protective of each other. Those were the days when you shared this and you shared that. My father kept pigs. At Christmas, the butcher would come to slaughter the pigs and we would give some of the meat to other people in the neighbourhood. And, of course, they’d give you something from their gardens. It was a beautiful experience.”

He had a very active childhood. “We used to swim every day during the summer at a little bay called Harman’s Bay [now a private beach] off the Railway Trail by Sound View Road.” He has a clear memory of how he learned to swim: “I was very, very young, about 4 or 5, and I was at Harman’s Bay hanging on to my cousin, Pearl Simmons. Someone shouted, ‘Shark!’ She started swimming for her life and so I had to swim for mine! We didn’t have formal lessons in those days. We just swam!”

His father kept a rowboat that was useful for family excursions. “In those days, on Thursday afternoons he was off, and he would always make a point of taking all the boys to the beach. He would take the boat and we’d all climb in. I liked to jump out and hang on the back. ‘Get in the boat, get in the boat!’ my father would shout. I loved the water. I do to this day.”

Sometimes they fished using a line, but they also collected mussels. “Mussels would stick to the rocks, and we’d scrape them off and eat the meat. You don’t see those mussels anymore.” Another time he and his friends did something far more dangerous. “During the war we’d see aircraft carriers and big ships in the Sound all the time. One day we swam from Harman’s Bay to one of these carriers. We were 11 or 12 or 13 at the oldest. Of course, it was very deep water and dangerous, though we didn’t think about that! Somebody on board the ship, perhaps the captain, saw the danger we were in. He put a life boat over and took us back to the beach.”

He remembers a similar boyish disregard for danger during hurricanes. “The funny thing was, you’d never hear a hurricane coming until it was almost here because there were no instruments to tell you where it was exactly. But I do remember being in the house and hearing all the wind. We thought it was fun!”

He always found nature fascinating. “I loved climbing trees, particularly cedar trees. The cicadas loved cedar trees, too. You’d have to be very quiet to see them up close.” He also loved studying bees by temporarily stunning them. “I’d half fill a bottle with water, catch a bee and put it in the bottle and shake it. Then I’d take the bee out, put it on a table and watch it through a magnifying glass. I could see its wings, its legs and the pollen on it. Then I’d leave it in the sun and watch it come to and start to move. Then it flew away.”

The occasional escapade aside, he recalls a far greater respect for law and order in the community than there is today. “Mr. Milton Cholmondeley, Mr. Hazel and Mr. Cann were all local policemen, and they were very much respected. They were true community beat officers. If a policeman said no, it was no. If he said stop, you’d stop.”

Walter also loved sports, including football and cricket, but he never attended Cup Match, even when it was held in Somerset. “My parents were very religious,” he explains. “They belonged to the Brethren Church, which was on Mangrove Bay in Somerset, and we had to go to church services on the Thursday and Friday. The first time I went to Cup Match was the year I was elected to Parliament in 1976.”

Did he mind? “At that time, Somerset always won,” he says. “So I was always satisfied!”

But their church offered another annual event, an annual Sunday-school picnic held on Harman’s Bay or Somerset Long Bay. Sometimes it was held at Whale Bay, which meant travelling by bus. His mother, together with other adults, helped prepare by making drinks and sandwiches.

He occasionally took a bus to town with his parents, but, he explains, “That was a very big deal.” Going to the City of Hamilton was also eye opening, given the racial segregation of the time. “There weren’t any black sales persons in the stores, and there were places black persons could not go. For example, there was a restaurant called the Brass Rail in the Walker Arcade that black people couldn’t go to at all.” This was in contrast to Somerset, where some variety stores had black owners. “There were many small mom-and-pop stores. They probably didn’t make much money because the population was so small. But then,” he points out, “you didn’t need a lot of money to sustain yourself.” He remembers one variety store owned by Martha Carter in Somerset. And he also remembers black staff members helping in white stores such as the A1 and Loughlands, so the segregation was not as apparent as it was in Hamilton.

However, that is not say there was no segregation in Somerset. For example, the Somerset Cricket Club had black members, while the Sandys Boat Club was restricted to white members. Schools were also segregated, as was true throughout the rest of the island. For his first two years of schooling, Walter attended West End Primary. “I remember we had to pay for schooling in those days—sixpence a week. On Mondays, my eldest brother, Alan, would take all the money for the four of us to the school office. It was two shillings in all. I never carried my own money.” Just before he finished at West End, education became free.

He then attended Southampton Glebe Primary (now Dalton E. Tucker Primary), which was where Port Royal Golf Course is now. After finishing Southampton Glebe, he looked for further education that would offer technical training. His brother Alan had previously followed the family tradition of training at Dockyard. Because Dockyard closed in the middle of his apprenticeship, he went to Portsmouth in England, together with 49 other young Bermudian men, to complete his courses. By the time Walter was ready for further education, Dockyard was no longer an option. Instead, he went to the Technical Institute. “I was one of the first students to go to the Technical Institute,” he explains. It opened in 1956 on Roberts Avenue and was the first educational institution on the island to be racially integrated.

Happy though his childhood was, it was not all school and play. From the time he was 10 or 11, he worked. There were family chores, but he was also a paperboy. “Rain or shine, I would go to Mr. Dudley Bassett early in the morning—he ran the newspaper agency—get the papers and would drop them off to customers on my way to Southampton Glebe. I made about three shillings a week. Then in the afternoons, I would get groceries for my parents but also for my neighbours who would pay me. So at the end of the week, I’d end up with almost seven or eight shillings. I would always save it. I was taught to value money from the time I was a little fellow.” Occasionally he bought a soda for eleven (old) pence (he’d get a penny back for returning the bottle), or other treats. “There were Sugar Daddies,” he recalls, “sweet candy wrapped in paper on a stick, and cane candy. I really loved that.”

He also liked to collect pennies, old British pennies before the currency was decimalised. “In those days, pennies could be quite valuable, especially those minted in 1949. And there were others that were mis-struck, which made them even more valuable. I still have some of those pennies to this day.”

Clearly, growing up in Sandys Parish shaped his career, although he might not have realised it at the time. Dockyard became very significant. “I remember when Dockyard was a ghost town,” he says in his WEDCO office in the Clocktower. “It does my heart good to see how it has developed over the years.” And while doing the paper round for Dudley Bassett taught him the practicalities of making money, the importance of making relationships did not occur to him until much later, after he was elected to Parliament. “One of my constituents reminded me I was her paperboy,” he says. “My paper round actually became my Parliamentary district.”

In 1964, Walter Lister graduated from the Munro Business Institute in New York as a computer programmer. He was first elected to Parliament in 1976. He has been a member of Cabinet and has served as minister without portfolio. In 2002, he became chairman of the West End Development Corporation, a position he still holds. Now retired, he ran the Walter Lister Insurance Agency for many years. He is married to Brenda, and their daughter, Lisa Reed, is currently executive officer of the Human Rights Commission.