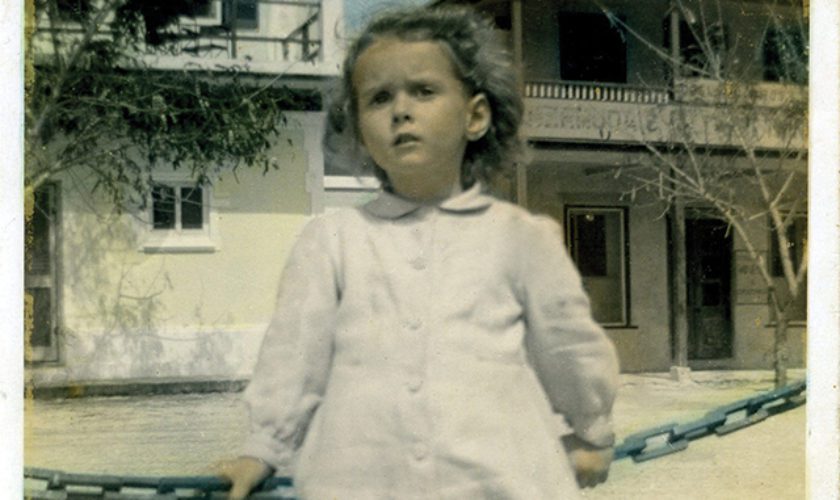 Where I Grew Up: Sandra Rouja, St. George’s

Sometimes the length of time you stay in a place does not determine how much your identity is tied to it. That is the case with Sandra Rouja, writer and retired research and collections assistant for the Archives. She has spent the majority of her life in Southampton, but says she identifies far more with St. George’s where she lived for just six years of her childhood.

Born Sandra Taylor in King Edward VII Memorial Hospital in 1939, three years after her sister Dolores, she first lived in St. David’s where her father, Frederick Gordon Taylor, was a member of the Bermuda Volunteer Rifle Corps (BVRC) and was later posted overseas to Egypt. Her mother, Loucil, neé DeCosta Silva, whose ancestors had arrived in Bermuda from the Açores in 1888, was from Southampton where her grandfather had a farm. (The farm came in very useful during the wartime shortages when her grandfather would send eggs and vegetables, as well as her grandmother’s farm-made cheese, to St. George’s by train.) In 1941 Frederick and Loucil moved with their daughters into a house on Water Street, where Mr. Smith had a grocery store and sold scoops of butter in paper boats. Another store was opposite. Sandra vividly remembers the house where they lived although it has since been demolished to make room for the parking lot behind the Bank of Bermuda. “There were four bedrooms,” Sandra remembers. “One for Dolores and me, one for two boarders from the base, one for Mrs. Fox, the elderly mother of the then mayor whom my mother looked after, and, of course, one for my parents.”

Sandra remembers spending most of her time in the kitchen where there was a big wooden table covered with an oilcloth. “My mother loved to cook. There was often a pot of Portuguese soup on the stove. And she liked to bake and make fudge.” On Dr. Curtis’s instruction (Dr. Curtis had delivered her), Sandra stayed at home longer than most children because she suffered from low blood sugar and needed to eat every two hours. “Mother would make me potted meat sandwiches and give me a cream soda with a piece of fruit.”
Sandra particularly recalls ice blocks being delivered before refrigerators were common in Bermuda. “It was a major event. They would bring a long piece of ice in a burlap bag or hammock and turn it into a long, green metal box. We’d put our groceries on top. There was a drain which ran into a bucket.” She also remembers milk being delivered every day in a glass bottle. “My mother made custards out of it. When milk was scarce at times during the war, she used tinned milk instead.” The empty bottle appealed to Sandra and her friends. “I’d tie a piece of string around its lip and pretend it was a cow.”

This was the era of the washboard and Sandra had a little one of her own for her dolls although she says her dolls were always naked. “But my stuffed animals were always dressed!” Sometimes Sandra’s Portuguese grandmother came down to visit from Southampton for a week. She would speak Portuguese with Loucil and sing songs to the children. She taught Sandra how to crochet bib aprons.

Their house had a garden which, like many in St. George’s, was walled with Bermuda stone and a perfect place for children to play. “You had to walk up two steps and go through a green-painted wooden door to reach the garden. There were banana trees, a pride of India tree with a swing running from it. And we had a tree house and a wooden seesaw.”
However, Sandra and her sister were not confined to the garden—the square and the streets were their playground in those days before motorised traffic was common. “The wonderful thing was it was so safe. We’d play hopscotch and hide and seek. We’d skip and we’d use a rope to play horsey—we’d place the rope under our arms with one child being the horse and the other the rider. The walls were all covered with flowering vines and ferns and most of the houses had cellars with old steps going down and all kinds of places for fairies.”

Further afield on Cut Road was a goldfish pond she liked to visit. St. Peter’s cemetery was also a favourite spot for play. “It was a bright, sunny place full of flowers.” The churchyard appealed to her imagination since she liked to read the plaques, especially those commemorating people who had died so young.

Sandra’s childhood memories of St. George’s are very sensual. “A horse and carriage was always on the square where the Bank of Bermuda is now. Even if you were not taking a ride, but just walking by, you could smell the scent of the horses mixed with the smells of the driver’s pipe smoke, the wax polish of the leather and the plaid blankets. And the scents of frangipani and honeysuckle were everywhere, all along the alleyways. The cenotaph was in the centre of the square, not pushed aside as it is now.”

Sounds were important, too—the clip-clop of the horses, especially over the causeway when she and her family would go to Tom Moore’s Jungle in a hired carriage, and the sound of the British Regiment band rehearsing at the garrison and in the square. The Salvation Army band would play in side streets, too, especially at Christmas, and she would hear the tambourines and singing, as well as the brass instruments. Taste was also important. “Robinson’s Drugstore had a wonderful soda fountain. Dolores and I went in with 10 pence and came out with a rum-and-raisin ice cream cone or a root beer float.”

At nighttime, she remembers, the siren would sound for the compulsory wartime blackout, and they would cover the windows with blankets.

On Sundays, they would attend the Methodist church just outside St. George’s where Sandra’s mother taught Sunday school. “She was raised Seventh Day Adventist,” Sandra explains, “because my Portuguese grandmother, who was very austere, was a founding member of that church.”

When Sandra was six, she attended St. George’s Grammar School with her sister. “I remember winning a prize, a Raggedy Ann book. I said, ‘I already have it.’ And I gave it back!” Before leaving St. George’s, the girls spent a term at Mount St. Agnes Academy, taking the train every day into Hamilton. “That was great fun,” she says, recalling the wicker chairs and the bridges the train travelled over.

There is an important reason Sandra feels so closely tied to St. George’s: her family on her father’s side, the Taylors. “Sometimes Dolores and I felt we never quite fitted in during celebrations with the Portuguese side of the family because we couldn’t understand or speak the language—as was the custom of the time, we weren’t encouraged to learn it.” But there were constant visits with the Taylor side, all of whom all lived in St. George’s.

“Uncle Captain Roy was a charter fisherman and he owned a boat called the Wally II, named after Wallace Simpson! He also owned Taylor’s Wool Shop (now owned by the English Sports Shop). He was an absolute sweetheart. He painted wonderful paintings of fish though he never had an art lesson in his life.” Today, a picture he painted of a bluefish hangs on the wall in her living room. “Long before face painting became common for children, he once painted an angelfish on my cheek,” she recalls. “I never wanted to wash it off!”
Then there was her Aunt Lilian (“Lil”) who taught Sandra how to swim at Convict Bay and in the St. George Hotel swimming pool when she was four years old. But perhaps most important was her grandmother Ethel, neé Virtue, who fed Sandra’s thirst for stories. Born in 1880, Ethel lived her whole life in St. George’s, Sandra explains, except for the short time she was with her husband, Frederick H. Tayl
or, in Ireland. He had come to St George’s with the British Regiment.

After marrying in 1904, the couple left Bermuda when Frederick was posted to Enniskillen, Northern Ireland, where Sandra’s father was born. In fact, Ethel’s family’s military roots go back to the early nineteenth century. An ancestor of hers, Robert Virtue, arrived with the British Regiment in 1842, eventually serving on the convict hulk the Thames in Convict Bay and marrying Mary Reddy, the daughter of a convict guard, who gave birth to Frederick Gordon Virtue, Ethel’s grandfather. Robert would die tragically young in the outbreak of yellow fever on the Thames.

“My grandmother’s house Boetia overlooked Convict Bay and St. George’s Harbour. It had a verandah around it and she lived upstairs. She had an eternal youth, even though she looked old,” Sandra remembers. “She was always laughing and there was always somebody visiting her. She’d give you a piece of cake and a glass of milk and tell you stories about the sea. Her whole life was related to the sea. The stories could be about tall ships coming in or about people dying on ships. The lives of the people she would tell you about seemed so exciting! She loved murder stories in magazines and she had a great thirst for the wild—the total opposite of my Portuguese grandmother.”

It’s interesting that Sandra’s childhood memories are innocent of racism since although segregation was a harsh reality in Bermuda during her early childhood, she was not aware of it because her family did not forbid her to play with children of other races. “You played outside and you didn’t think about race. I realise now that my experience would not necessarily be the same as that of others growing up in St. George’s at the time. Grandmother Ethel’s visitors could be any colour.” (Later, in adulthood, Sandra would discover that Ethel’s grandmother, Julia Appleby, was a descendent of slaves in Bermuda.) “My mother was a first generation Portuguese, born in 1914. She knew something about prejudice and exclusion! Treating people the way you wanted to be treated was passed on to us.”

When Sandra was seven, she and her family moved to the US and, as she says, “That’s when the colour issue was obvious to me. Virginia was my awakening to segregation. In St. George’s I felt we were different but we were the same.”

Sandra would stay in the US just two years. Her parents divorced, and Loucil took her daughters back to Bermuda to live with her parents in Southampton. But in those two years Bermuda, in Sandra’s eyes, had irrevocably changed. “We left on a ship. We came back on a plane. The train had gone. The cedars had gone. And there were cars and trucks.”
Perhaps the dislocation Sandra felt upon leaving St. George’s at such a young age and then returning to a quite different Bermuda explains why the Old Town of her childhood is so much part of her identity and why she is able to capture so vividly in her writings its sights and sounds and flavours. As for her family members long gone, fortunately for us, they still live on in the stories and memories Sandra has recorded in her books and articles.