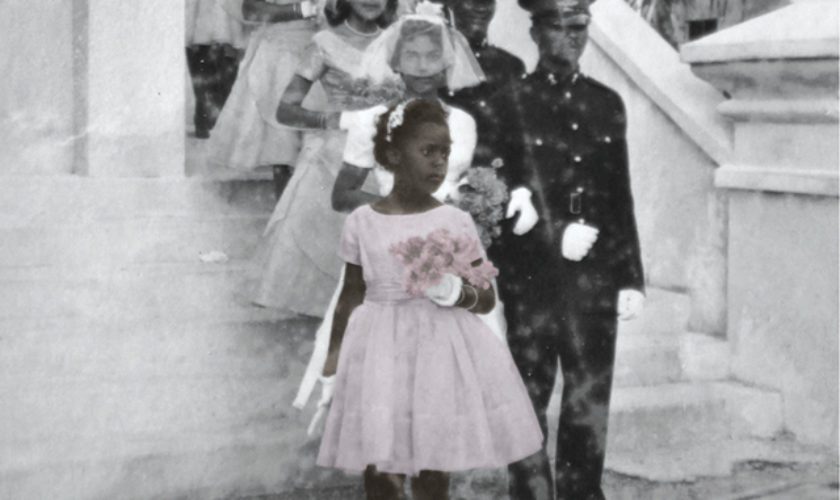 Where I Grew Up: Sharon Wilson, North Shore, Pembroke

Sharon Wilson’s art studio is in Turtle Place, Southampton, and it is here that over the years she has created the pastel and encaustic paintings of Bermudian children, families and neighbours for which she has become so renowned. However, the inspiration for those paintings arguably came from the other side of Bermuda, the north shore, where from the age of two she spent her formative years. Her grandfather, Robert Austin Wilson, bought a house on the second estate west of West Pembroke School. There she lived with her grandparents, her mother, Marion Tucker, and her brother, David, who was two years older. Her mother had her own hairdressing business downstairs.

“The house was on the corner of North Shore Road and Tablerock,” she explains. “There were two shops where you could buy loose candy which was sold in paper cones—toffees, jelly beans and wine gums. You could get a lot of candy for sixpence. There was Mr. Thomas’s shop to the east of West Pembroke School and Mr. Ingham’s five houses to the west of the school. I remember how you would get half a pound of cheese wrapped in wax paper and tied up with string.”

It was a neighbourhood with mostly white and Portuguese families. “Our nearest neighbour was American—I think the father was connected to the base. Our backyards were opposite each other, but the mother didn’t want their children to play with black children. One day when she was out, we snuck out to play and she found us. I remember the mother shouting, ‘Didn’t I tell you not to play with black children? Do you want me to buy you a black doll?’”

Sharon’s grandmother, Dorothy Wilson, who was a member of the Hibiscus Club, always liked their garden to look good, Sharon remembers. “There was a rock garden and the flower beds were nicely done with marigolds and zinnias. My grandfather did a lot in the garden—there were a lot of hedges to cut and grass.”

“My grandmother was very strict—she was very house-proud and religious. Everyone trembled around my grandmother. On Sundays there was church—at St. Paul’s AME—and Sunday school. My grandfather sang in the choir. You could have quiet play but you had to stay clean all day. You could play chequers but not cards. And you could read.”
It was her grandmother who set the chores—ironing or organising cupboards. “You had to do it over if you didn’t get it right. I remember she’d give me a toothbrush and polish for cleaning the bricks of the steps. But I never had to do laundry or hang it out.”

Sharon far preferred to be with her grandfather who had a carpentry shop, Wilson and Lambrock, on Happy Valley Road. “He sometimes worked in the Hamilton Princess Hotel but mostly he worked in houses. I’d hang out with him in the garage when he was planing things and he made my brother and me swords. He was a very gentle man, soft spoken. He liked children a lot and he’d tell lots of stories with moral meanings behind them.”

Her grandfather gave Sharon her first exposure to politics since he was a founding member of the Bermuda Workers Association which eventually became the Bermuda Industrial Union (BIU). She has a dim memory of standing by the dock when Marcus Garvey was turned away from Bermuda although she is not sure whether she was actually there or whether she heard about it. Often union members would meet in their kitchen.

“When I was seven or eight, I’d hear a lot—about mortgages being pulled, for example. I couldn’t really understand what they were saying but I could hear the urgency in their voices.”  During one election she and her brother David were runners between the polling booth on Front Street and the PLP headquarters on Court Street. She also remembers the BELCO riots in 1965 when a big meeting was held in Devonshire Recreation Club and seeing Dr. Barbara Ball and Roosevelt Brown there. “I remember standing on a wall and seeing fire. And I persuaded my mother to take me to St. Paul’s AME. As soon as we approached the street our eyes burned from what the police were spraying to disperse the crowd. It could have been tear gas or pepper spray.”

Overhearing adult conversation was very much part of her childhood. In addition to conversations about politics, she would listen to the conversations between her mother and her hairdressing clients.

But there was room for fun as well. She played with her brother although he often wandered farther afield to stables near the Green Lantern. And she remembers playing with a small Portuguese boy, Michael Rebello, who also lived nearby. They would climb loquat and oleander trees and play in the bushes in the back of the property where they would get covered with sticker weeds (possibly shepherd’s needle). Games often included using foliage for making playthings. Oleander branches, for example, were useful for making bows while fennel sticks provided the arrows.

“We used to make slingshots for shooting pride of India berries,” she recalls. “We’d take a tongue from a pair of old sneakers, rubber from old tires and make the structure of the sling from oleander.” She loved riding a go-cart her grandfather had made out of wood and baby carriage wheels, as well as a wooden bike with three wheels. There weren’t too many bought toys because, with her mother being a single parent, Sharon was very conscious of not asking for too many things. But there was a metal tea set she loved to set up and play with. “Cola was my tea or coffee and I’d serve those weeds that look like string beans.” She also remembers a tall black doll she was given one Christmas. And there were the popular toys of the 1950s and early ’60s—tops, marbles and hula hoops.

During most of the year she would spend hours swimming in the ocean, just across the street. Together with children from other neighbourhoods who would come to swim, she would jump from the rocks in an area opposite West Pembroke School which was known as “the lady’s chamber” or she would doggy paddle from Deep Bay, a sandy beach near Admiralty House Park. “I was never taught how to swim. But we had the space and the time to be in the water. We’d take a sandwich with us or something and we would swim all day. There were never any adults watching us,” she recalls. “The older children would swim out further and they would look out for the younger ones. It could be scary, too, as there was always some little bully.” Fishing with hook and line off the rocks for squirrel fish, pollies (cow pollies) and breams was also a favourite activity.

They would enjoy the usual Christmas and Easter celebrations, but the one annual event that sticks out in her memory was Guy Fawkes’ night, now rarely celebrated in Bermuda. She vividly recalls the smell of gunpowder from the fireworks—sky rockets and roman candles—which her great uncle brought for the day. Her contribution was preparing the sweet potatoes for sweet potato pudding that was always served as part of the festivity. “I had to grate it so finely, my fingers would be raw.”

But Sharon’s fondest and most powerful memories are of her elementary school, West Pembroke, which she found very nurturing. “I remember a teacher hugging me and how good that hug felt. That’s why I hugged my students at the end of term when I was teaching at Heron Bay.”

To this day she can recite the prayers and the songs, such as:

Father, we thank Thee for the night,
And for the pleasant morning light,
For rest and food and loving care,
And all that makes the world so fair.

Help us to do the things we should,
To be to others kind and good,
In all we do, in all we say,
To grow more loving every day.

“I remember learning proper penmanship and that adults would talk to us a lot. I loved it when a teacher would say,
‘Great things are expected of you, you know.’ I wanted to say to her, ‘Tell me more about what you think I could do.’” At the time, art was not important to Sharon so it never occurred to her that her paintings would be those “great things” she would eventually offer to the world.

Ironically, given how important school was to her, the only time she can ever remember stealing was at school when she fell in love with a jigsaw puzzle that depicted people around the world. “The pieces were wooden with glossy tops and they would plop into place. I remember they came in a maroon box. I took one piece and hid it in my sweater. Then I forgot all about it until later when I thought it was a cockroach in my sweater. I can’t remember whether I ever took it back!”

But there is poignancy in this story. Though persons representing countries worldwide were on the puzzle, no black person was included. As Sharon has explained in many interviews about her art, it wasn’t until she went to art college in America that she saw any painting of a black person either in a book or on a wall. Her mother told her once: “Don’t worry why you’re not in the book; just read the book.”

Fortunately, Sharon has always felt a commitment to paint the story of her people, to celebrate it. When we look at the early paintings that gave her widespread recognition—paintings such as Secrets, Boys in School—as well as her more recent Bermuda Gold and Bermuda Children collections, we can see in the innocence they depict the strong influence her attendance at West Pembroke School has had on her work.