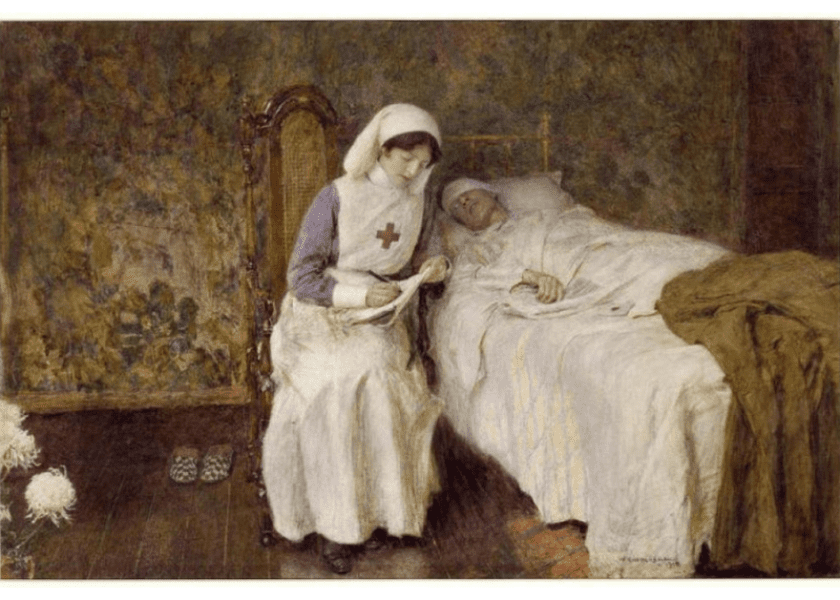 On July 14th the Chief Nurse of Base Hospital 31 notified me that I was to go on detailed service. I had a half hour to get ready for the Ambulance that was to take 8 of us nurses, including myself. The ambulance arrived at 6:30 and we left for land unknown.

We drove all night and it seemed as if we were heading right in to the front line trenches, for the flashes and loud roll of the guns were so frightening. Still, we just kept on going. Several airplanes were going up from the different air dromes that we passed, and that night at about midnight we saw our first air fight.

At last after many stops we finally reached our destination. A Capt met us as he was on guard that night and ushered us to a tent, informing us that we were to sleep there. It was 3am by then but we could not see how anyone could sleep with the roaring of the guns. In that tent there were several men sleeping so we had to get out of that one to another one where we made our beds and rolled in. We could not sleep but rested and the cots felts right fine after the jolting of the Ambulance ride but sleep was far from our eyes. Getting up at 6.30 we washed our faces with cold cream for we could not find any water and used the wheat field for the toilet. We went out to look for the mess tent and we had good breakfast with pancakes and hot coffee. At breakfast we met Van Glynn’s team and the officers of EHU. As were the only nurses, Miss Morse was appointed Acting Chief Nurse and she put us all to work on making dressing, the frightful guns keeping us on the alert all the time.

After dinner patients began to pour in and oh how they came, the worst cases that I have ever seen, Ambulance drivers put them down everywhere, the Surgeons being unable to operate fast enough. I was put in the Operating Room for the afternoon and all next day, everything was upside down and we were not prepared for patients. That afternoon several more nurses arrived on the scene to help us and we were very glad to see them. Shell wounds and oh the poor boys dying so fast it was murder and just made your blood run cold to see the boys but not a word from any of them, they were so patient and oh so good.

The following night I was put on night duty in 8 wards, one being the Officers ward. Working without lights is no joke, for we had to treat the wounds and try to relieve the patient. Oh how we did dread to see the moonshine and it happens that the moon shone brighter than ever that night. It did help us in one way though, it gave a little light for us to see how to work, but on the other hand, it didn’t make it hard to find us.

They were flying over us all the time and on one night Fritz came down as close to me as possible. I was terrified, that being the first time that I had ever heard them so close. Happily he flew over my tent before dropping his bomb and after he left us I went over to my other tents to see if my patients were OK. On entering one tent I could not find my Corps man I called him but no answer came so I went to look for him. We had a large base in the corner of the tent and I could see that there was something dark in it instead of white beds, I stood there a minute looking when one of my patients said ‘Miss I will come out’ and there he was with my Corps man behind him so I laughed and said ‘what are you doing there? He said, ‘we both were scared and went in there for protection’, poor lads.

Well Fritz was not satisfied and he came the very next night and used his machine gun. Heavens the excitement! Patients with splints on both legs got up and ran for the wheat field and all the nurses and officers and men slept in the wheat field too. Quite a site to watch the different people getting up out of the wheat field bringing their blankets with them in the morning. The following night it was rainy so Fritz could not fly and the Anti air craft guns had a rest for the night also – and so did the nurses.

We had orders to ecaccuate all of our patients and move. Oh how quickly the tents went down, they were put in the trucks and we were off in Ambulances. We went to a little town to await orders for when you are in the Army no one knows where they will land. But that was one of the times that we pulled one over on Fritz for he came dropping several Bombs but could not find us for we were in the road hiding behind some trees. We travelled until 12 then stopped and were not allowed to go any further. We got out of the Ambulances and slept on the road, some slept in the hills and others in the gutters some in Ambulances. At 5 am the bugle sounded and we all piled in the Ambulances and started off again.

We arrived at this beautiful Chateau at 12 noon the next day. It was a lovely day the sun shining so brightly. But we were very tired from travelling for 24 hours that we laid down under the trees to sleep. The lake in front of the Chateau is beautiful and oh the trees and woods around are so wonderful. The French have been occupying this Chateau as a hospital, then the English had it, then the French again who were there when we arrived to take it over for Americans. They had to evacuate the patients before we could occupy it, but left the worst cases for us to take care of.

Our cooks had dinner ready for us at 3pm and coffee – it tasted so good.
At that time patients began to pour in and at 6pm we were operating. I started night duty at 4pm, so very tired but receiving such badly wounded that I forget all about being tired.

The French nurses were so queer that every time we opened the windows they would come behind us to close them, then we would go right after them and open them again so after a while they left us alone. Oh the flies were fierce and being in the chateau it was hard to keep them out although we had made screens of gauze.
We only had the badly wounded and those in shock in the operating room in the chateau. The rest were out in the field which made a very pretty camp for the tents were practically new, and the grass was so green with those tents under the trees.

Every day our planes would fly over and salute the dead for the Madam had such a pretty cemetery. French, English, Americans with a few Algerians and Germans in it, but it had such a large wall all around it and it kept it looking so good, we buried a great many of our boys there much to our sorrow. That was one place that we slept in the building but for my part I would just as soon sleep in my little tent. One morning when it was just daylight I looked out my window and as far as I could see there were stretchers with patients lying on the ground all along the drive and the boys were feeding them hot coffee. The rain was pelting down but we were flooded and could not get them under and cover and the ambulances and trucks were bringing them in as fast as they could. We did not hear such a roar of guns for they had advanced so quickly that we were pretty far back but had enough work to do, everyone working just as hard as they possibly could. After supper every night I would take a little walk down to the lake before going on duty, some of the men used to bathe in the lake quite frequently. Then the airplanes used to practice firing in it everyday at 3pm.

Today is Sunday our moving day and it began to rain so that the ground is nothing but mud, making it so difficult to take the tents down. But the order came in and we had to obey. The tents were somewhat dirty, not those beautiful white tents any longer but old dirty ones. We moved in ambulances again but this time we do not get stopped.

Raining cats and dogs we arrived at the worst place everyone could imagine so the CO gave us an order to go to EH6 for the night.