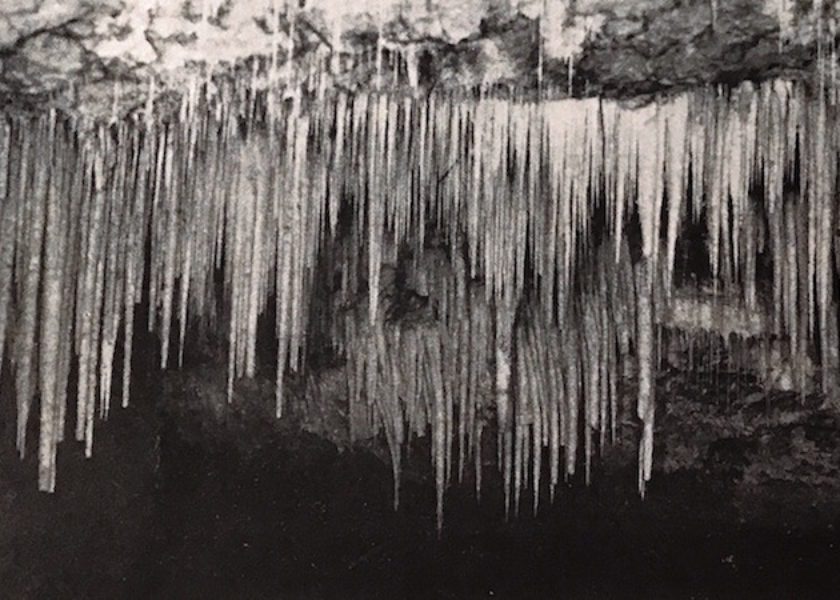 Crystal Cave – One of Nature’s Pleasantries

This article was taken from our archives. It originally appeared in the May 1931 issue of The Bermudian. It appears here exactly as it did in print originally.

Early in 1907, a group of small children were playing with a rubber ball in the vicinity of Bailey’s Bay, when suddenly their plaything vanished. In the search for the ball one of the boys discovered a deep hole in the earth which he plumbed with a long stick. It was apparently bottomless, and his child’s interest was aroused. Calling his playmates to aid him, he began dragging away the stones that walled the sides of the hole.

Some of the stones were too big for their strength, and had evidently been placed there by human hands to prevent cattle and dogs from stumbling into the crevice. Frustrated by the bigger rocks, the boys fetched their parents to the scene, and a party attacked the widening hole with crowbars and hammers, finally excavating a hole about two feet by four, or sufficiently large to allow a small man to squeeze himself through.

One of the most enterprising of the men tied a rope’s end about his middle and let himself be lowered into the hole. For fifty feet beyond the entrance the tunnel did not expand, but when it did it open into the magnificent subterranean wonder now known as the Crystal Cave.

Some time elapsed before the discovery was made known to the owner of the property, Mr. Julian I. Wilkinson. However, one day a small boy who had descended into the cave was playing with a white conical object which attracted Mr. Wilkinson’s attention. On examination he immediately recognized it as a stalactite. The boy led him to the mouth of the cave.

Mr. Wilkinson carefully surveyed the entrance and then sent his two sons into the tunnel with instructions to take notice of what they saw. They returned so enthusiastic about their adventure that their father promptly decided to cut a hole big enough to permit the construction of a staircase. Several weeks labour saw this accomplished, and then a gang of carpenters set to work on the winding stairs that descended 150 steps into the earth.

When completed it was possible for the curious to investigate the cavern for himself with the utmost safety, and soon Mr. Wilkinson had installed a lighting system in the cave. Electricity was not yet come to the islands, and an acetylene gas plant served the purpose for many years.

There was a large pool in the cave that was well worth traversing, so a boat was built inside the cave that could ferry visitors around the tiny subterranean lake. But the Crystal Cave became such a popular sight that the boat could not cope with the increasing numbers of visitors, so finally a pontoon bridge was built which is still in use.

In his original development of the cave Mr. Wilkinson met considerable skepticism in his immediate neighbors, some of whom owned property above the cave. A right-of-way from the main road was essential to induce people to visit the cavern, but his neighbors had little faith in the cave as a business enterprise. Finally, to carry out his plans, Mr. Wilkinson was forced to buy several of the properties adjacent to his own.

His faith in the project was justified beyond even his own hopes, and he continued to develop the approach to the cave, and in 1914, another tunnel was bored from the foot of the hill into the cave, making access much easier, and dispensing with the fight of winding stairs. This tunnel was two years in the making, but with all the steady improving and lighting the cave has become one of the finest of its kind in the entire world.

The formation of stalactites is caused by the slow percolating through the rocks of water containing minerals which it has gathered on it way through the earth. In all limestone caves stalactites form in great abundance as glittering white columns covered with a thin film of water. As the water, dripping from the roof of the cave, becomes exposed to the air, some of it evaporates, leaving the remainder so supersaturated that a deposit of lime is left, and with the passage of years and the steady dripping of water from the same spot a column of white calcite is formed.

For the perfect development of these stalactites, certain conditions are essential. The trickle of the water must be very slow, and the rate of evaporation regular. Currents of air would destroy the formation. Changes of temperature will interfere, of course, with the evaporation, sometimes accelerating and sometimes slowing it, and under these conditions the stalactites tend to stop growth or to become incrusted with irregularities and excrescences.

In one of the Moravian caves a stalactite about as thick as a penholder was broken across in 1880, a decade later it has grown in length nearly an inch. From calculations based on this it was judged that such a stalactite, seven feet long, may have been formed in four thousand years.

Not long after its opening to the public a perfect fossil of the Cahow bird was discovered in the recesses of the Crystal Cave, which held particular interest for naturalists as that species has been extinct for more than two and half centuries, though at one time they were abundant in these islands.

The Prince of Wales on visiting the cave was deeply impressed with its beauty, and when Annette Kellerman starred in Neptune’s Daughter, the Crystal Cave was chosen for the witch scene.

When electricity came to Bermuda the cave was equipped with a new lighting system, and quite recently the Westinghouse Electric Co. has introduced a most effective and modern installation of lights above and below the water, in all the most advantageous spots.