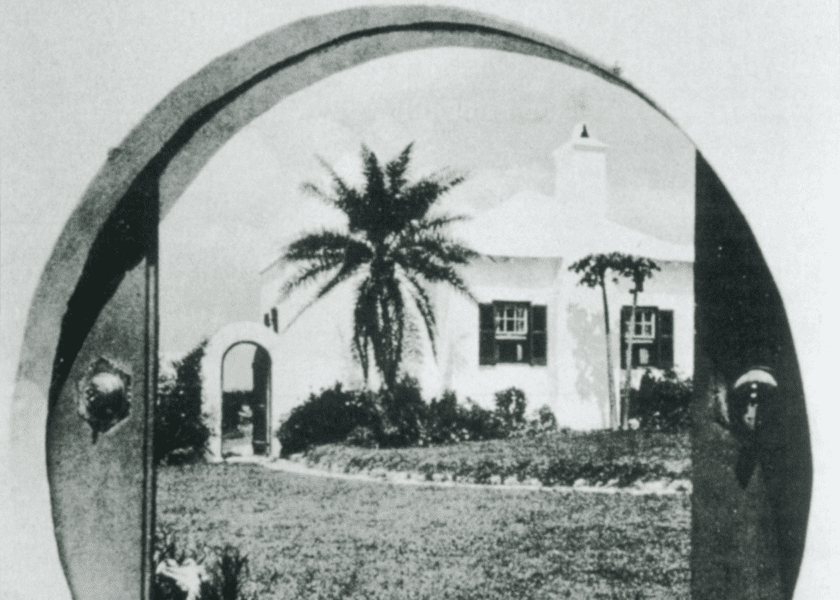 This article was taken from our archives. It originally appeared in the August 1995 issue of The Bermudian. It appears here exactly as it did in print originally.

The landscape of Bermuda is sprinkled with moongates, a familiar sight to residents, yet perhaps an architectural presence unexpected by tourists-except, perhaps, those who have also travelled in Asia. For the Island’s moongates have their origin in Asia-in China, specifically, and to an extent, in Japan.

Moongates are doorways, some free-standing, as if one fashioned a horseshoe from interlocking blocks of quarried limestone, then stood the horseshoe upright. A free-standing moongate appears exotic when seen nestled within a lush Bermudian glade. Other moongates are round portals through a wall.

Many of Bermuda’s moongates were built during the 1920s and 1930s, when European enchantment with Asia and Orientalism influenced architecture not only in Europe but also in the colonies of Europe. Bermudian architect .W. Hutchings is credited with the design of many of the early moongates on Island. Undoubtedly, ship captains and merchant seamen also brought knowledge of moongates to Bermuda via their travels in Asia. During the 1950s, photographic essays and advertisements in The Bermudian magazine and The Royal Gazette illustrate the popularity of erecting moongates. After all, these structure were synonymous with socio-economic status and prestige. In Asia, moongates were and still are a prevalent architectural motif associated with religion and metaphysical philosophy, as well as with status. Gates with circular openings were erected within the residences of aristocrats, scholars and administrators of the literati, within the compounds of emperors and empresses, and within the precincts of temples.

A moongate is a gate meant to suggest a full moon. Bermudians have attached their own meanings to moongates, but Asian meanings attached to the moon and to the gate perhaps are not well known. Historically, the moon is the basis of the Chinese calendar, dividing the year into 12 “months”, or moons. The moon is associated with health, well-being, and even immortality. Myth logically, the deity Ch’ang-O is said to have stolen an elixir of immortality, then fled to the moon for safety. The moon is vitality, and renewal.

It is also, of course, celestial. The distinctive feature of a moongate is its round opening. In Chinese thought, roundness is associated with the celestial, in contrast to the square and rectangular-which are associated with the terrestrial. Taoism, the Way of the Tao, associated with the sage Laozi Tzu, was an influential religious philosophy in dynastic China. Taoism depicts both creation and existence as circular. Wu-Chi, the genesis of the Tao, gives birth to Yin and Yang, together known as T’ai-Chi Ch’uan-the unitary harmony of opposites. T’ai-Chi is depicted as a circle of Yin (primarily light; moist and wet; soft and yielding) and Yang (primarily dark; hard and asserting). The ‘S’ shape of the dark and light aspects of the circle tell us the Chinese Taoists did not see the T’ai-Chi circle as static, but as a sacred image of the eternal circular movement of Yin and Yang. Moon gates are round because they symbolize the moon and the Tao. The moon is primarily Yang. Roundness is primarily Yin, while squareness is primarily Yang. A moongate therefore balances the energies of Yin and Yang.

When you view a moongate, envision the circular opening of the gate as a T’ai-Chi circle. No beginning. No ending. Envision energy moving up the inside of one side of the opening, while the energies swirling together in the centre of the opening. Look at a moongate and see the circle opening as movement.

Moongates are not exclusive to the land. Asian moongates are constructed both within and around water-an architectural Chinese term “borrowing from below” captures the ever-changing effects of the landscape as ever-changing reflections on water. In both China and Japan, most garden ponds are meant to be viewed at night, especially moonlit nights. The moon would appear to be “captured” in the pond, leaving its reflection in the water. There was a literal embrace of the moon, some embraces more benign than others. The Chinese mystic Li T’ai-po, according to legend, drowned from leaning over too far in his boat as he tried, literally, to embrace the reflection of the moon as the moon in the water.

Asian moongates are not exclusively circular in form. Chinese moongates, for instance, are composed of a primary circular form and secondary rectangular forms. The primary circular form is the opening of the gate. To balance the circle of the opening (Yin), we must look for rectangular forms (Yang). Generally, Chinese moongates were set on transoms (Yang). Square or rectangular stepping tones (Yang) invariably carpet the approach to moongates. Taoist balance is thus achieved, as the circular (Yin) opening of a moongate is associated with the celestial, while the rectilinear (Yang) aspects of a moongate (transom; stepping stones) are associated with the terrestrial. Metaphysically, the physical form of a moongate is a relationship-a Taoist relationship between the celes­tial (Yin) and terrestrial (Yang).

Understanding Asian metaphysical meanings given to the circular and rectilinear forms comprising a moongate helps explain leads to the moongate as a gate. The human element is a vital aspect of the meaning of a moongate. Moongates direct the path of people through landscapes, and signal an intent to plan the visual landscape experiences of people. ln Taoist China, the universe was San Ts’ai– the interrelationship of Heaven, Earth, and Man (the Human).

Usually, we visually experience a scenic landscape all at once. We stand in one spot, and turn our heads to see what is to be seen. Placed in a garden or courtyard, though, a moongate channels and inhibits our view of the landscape. We only see what the portal of the gate permits us to see. More importantly, to fully experience the landscape beyond, we must move through the gate. The gate defines an “outside” and an “inside” – Moongates are screens, and negate our customary all-at-once experience of landscapes. A moongate-laden landsacape becomes an aesthetic landscape, the gateway to a painting into which one gradually moves. Traditional Chinese residential complexes of the literati, for instance, by design were a series of freestanding or walled gates through which one successively passed. Each gate screened a distinctive setting.

Each gate often was entry to and exit from small rock gardens, the compostion and arrangement of which varied so as to embody the sensory aspects of each season. The gates permitted one to savour each “season” intensively, without the distraction of competing stimuli. The circular openings of gates were often arranged asymmetrically with respect to each other, such that one could pass through one gate while catching a glimpse, a tantalizing glimpse only, of the scene nested in the “seasons” beyond other gates.

The prevalent meanings of Bermudians attach to moongates are marriage, well-being, and, to some extent, prosperity. The moongate in the wall along Front Street, on Pitts Bay Road, near the old Bermudiana hotel, is accompanied by an inscribed plaque: “Legend says honeymooners should walk through the moongate and make a wish.” To reiterate the gift bestowed by the moongate, the inscription continues: “if you’re not a honeymooner, make a wish anyway.”

At first glance, it might appear that the contemporary meaning and use of moongates on Bermuda is at odds with the religious and philosophical basis of Asian moongates. Not so. Chich Lin (Yueh Lao), the Chinese God of Marriage, is traditionally associated with the moon. Chieh Lin has the power to connect, by an invisible red thread, persons predestined to marry. Marriage is simply the drawing together of the invisible red thread connecting those already joined. Another association between marriage and the moon in Asia occurs with reference to the practice of footbinding. Around the year 970, concubine Yao Niang is reputed to have developed the practice of footbinding. For Yao Niang, the idea was to compress, and distort, the feet of pre-ado­lescent females so that their feet resemble the arch of a crescent moon, the “new moon”. Females underwent what our culture considers the torturous procedure of having their feet shaped, and prevented from fully developing in size, in the belief that the resultant moon­like shape of the foot rendered her attractive, aesthetically and with respect to status, as a marriage partner.

Though not explicitly religious or physically deforming, Bermudians do continue the Asian association between the moon and marriage. It has become an Island custom for newlywed couples to be photographed within a moongate.

Though the association, with the marriage of males and females is not the root meaning and function of Asian moongates, it is fitting that moongates in Bermuda continue to be associated with marriage. It carries on an association made by Asians for nearly a millennia, where moongates embodied the union of complementary opposites. A newly-wed couple ceremoniously stepping through a Bermudian moongate is a symbolic entry into a new realm, a new state of being. After all, from the Chinese Taoist point of view, males are primarily Yang (and males ought not neglect the internal presence of their Yin female aspect), While females are primarily Yin (and females ought not neglect the internal presence of their Yang male aspect). Heterosexual marriage, then, is the (often oscillating) union of the primary Yin with the primarily Yang.

Suppose that somehow a photograph of a couple beneath a Bermudian moongate is teleported back in time to fall into the hands of a Chinese Taoist. I feel he would look at and understand the photograph-as bizarre as the appearance of the people and the form of the moongate might appear to him. What might he smile and say?