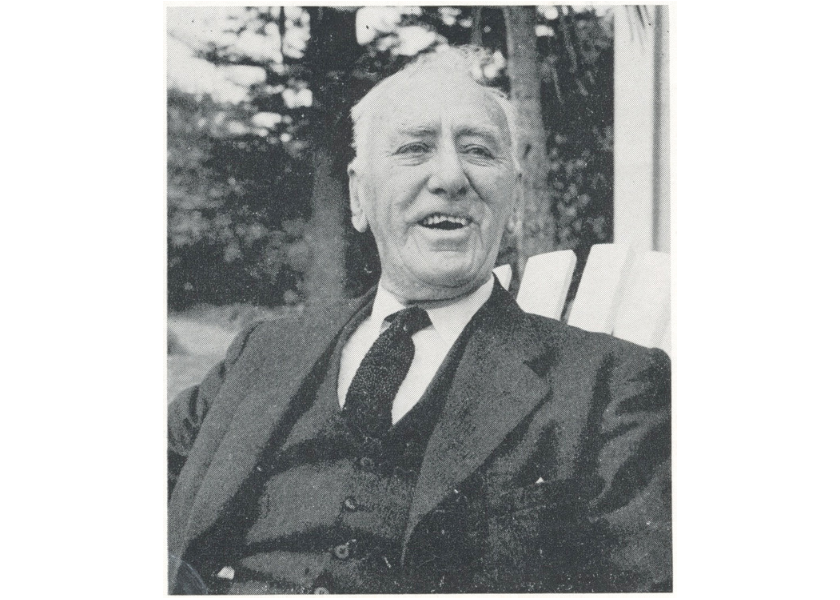 This article is taken from our archives. It first appeared in the March 1958 issue of The Bermudian. It appears here exactly as it did in print originally.

For the past fifty years, Arthur Wellington West has been simultaneously engaged in two completely incongruous businesses. One has been the tough, rough world of stevedoring. His second business is the growing and exporting of lily buds.

There seems to be no one in Bermuda who does not personally know, or has heard all about, Arthur West. Mention his name and immediately warm laughter lights everyones’ faces and a steady stream of anecdotes about him pour out: his lusty enjoyment of life, his famous feats of strength, his kindness, and his highly colourful language.

Mr. West, now 81 years old, has white hair, intense blue eyes, is six-feet-one, and still has a husky frame. Recently, he had the first real illness of his life, a serious foot infection, and spent two weeks in King Edward Hospital. It is stating it mildly to say that he was outraged at finding himself in bed. Throughout his stay there, his vast disapproval of this trick of fate resounded, in his roaring voice, down the hospital corridors. However, he is now home again and checking in at his stevedoring company, A.W. West & Son, every day, now roaring his approval at being on his feet again.

Everyone in Bermuda, from taxi drivers to members of Parliament, calls Arthur West by his initials, “A.W.” or, oddly enough, by the name “Joe.” He acquired the nickname “Joe” in the early 1900’s, when the Prime Minister in England was Joseph Chamberlain. Arthur West not only looked like Mr. Chamberlain, but also continually quoted him, with warm admiration, “Joe said this… Joe thinks that…” Eventually friends, perhaps becoming slightly confused between the two men, began to call Arthur West “Joe” too.

A.W. or “Joe,” was born in 1876 at his present home, Shelly Hall, at Shelly Bay. This house of twenty-two rooms has been in his father’s family for generations. The kitchen section of the house is 300 years old, the rest of the house being more modern, only 150 years old. Shelly Hall, a truly magnificent house, is surrounded by 18 acres of A.W.’s lily fields.

A.W. attended the Lyceum Bay School, Whitney Institute, and Ontario Agriculture College in Canada. On his return to Bermuda he went into lily farming, which was quite natural as his father, George West, was one of the largest exporters of lilies on the Island. A.W. entered partnership with R. Hartley James, on farms where Kindley Field is now located.

Soon, itching with wanderlust, he took up seafaring. Tiring of that, he went to work for a dairy equipment company in Westchester, Pennsylvania. He acquired this job by walking into the office and announcing, “I know more about farming than anyone in your whole company. Hire me.” Stunned by his brashness, they immediately put him on the payroll.

After four years he was off again, back to Bermuda and the lily business, then away again to spend two years in Jamaica and Trinidad. On his third return to Bermuda he not only entered the lily business but also, in 1906, became a stevedore with Captain Harnett. Soon he joined forces with the Captain and is still associated with the shipping firm of Harnett and Richardson.

When A.W. was 27 years old, he first saw his future wife. One night, while attending the Black and White Ball at the Hamilton Hotel, he saw an exceedingly pretty brunette on the dance floor. He stopped, dumbfounded, and watched her out of sight. “That’s the girl I’m going to marry,” he announced to his sister.

Soon he wangled an introduction to the girl. She was Ruth Melancon Rutherford, from Detroit, Michigan, who was acting as secretary to the famous American author, Upton Sinclair. Mr. Sinclair, who was trying to concentrate on his writing, found his house resounding to the booming voice of the stevedore and lily grower. In 1908, A.W. and Ruth were married.

The Wests had five children; Phyllis, now Mrs. Hal Harron of Essex, Connecticut; Marion, now Mrs. Arthur Scully of Evanston, Illinois; George Wendell, who was killed in World War II in Timor; Sheila, now Mrs. William Gosling of Paget; and Billy, who is a partner with his father in the stevedoring company of A.W. West & Son. Mr. West also has a step-son, Richard Rutherford, who is the owner of Tom Moore’s Tavern.

A.W. has fifteen grandchildren. However, he always announces that he has seventeen. During the war, his son, George Wendell, married an Australian girl. They had no children before his death. However, when she remarried in 1941 in Australia, Mr. West, who keeps  in weekly contact with her by mail, proudly claims the two children she has since had as his own grandchildren too.

When the Wests’ children were growing up, life at Shelly Hall was never exactly restful. The house continually overflowed with the six children’s friends, stevedores, farmers, men off ships, neighbours, horse racing enthusiasts and various tourist friends from afar. Mr. West usually kept ten race horses on the grounds, plus cows. The children had macaws, parrots, cats and four grown collies who, between them, at one time presented the Wests with twenty-three puppies.

Life was not always peaceful for guests at Shelly Hall either. One day a sweet and pious woman was visiting Mrs. West, when George Wendell was thrown down from a horse outside and dragged a hundred yards. A.W. was blissfully reclining in a bath upstairs when he heard the screaming and shouting. He sprang out of the tub, grabbed a towel, and hurtled down the stairs. Dripping wet, clutching the towel around him and cussing at the top of his voice, he charged though the living room where the guest was having tea. The guest, looking pale, made a hasty exit.

A.W. has always been physically immensely powerful. There was one time when a massive stevedore, even larger than he, kept annoying him while they were unloading a ship. At last, goaded beyond endurance, he casually picked up the huge stevedore and tossed him overboard, then fished him out with a rope and gave him a pound note to buy drinks to warm himself. The stevedore never bothered him again.

A.W. could also take on every man in a bar and clear the room completely. “I never fought for the love of fighting,” he says. “It was only if someone had been insulted, and wasn’t able to defend himself.” Once or twice, an angry proprietor, looking around the shambles of his bar, would call the police, which in those days was a tiny force of only a few men. Arthur would greet the policeman amiably and offer him a drink. However, if the policeman proved insulting, Arthur would, as he expresses it, “turn him upside down.” Once, when a policeman came on board a ship he was unloading and, without reason, became abusive, A.W. merely chased him overboard.

He was also notable for his picturesque language. While overseeing the loading of a ship, his booming voice could be heard for blocks. The Chief of Police once told a huge young constable to go down to Front Street and tell that man to stop swearing. The constable, his eyes starting out of his head, quavered, “Me – tell Arthur West to stop swearing!” The Police Chief immediately understood and rescinded the order.

Mrs. West, who died in 1951, was the exact opposite of A.W. in personality. She was quiet voiced and gentle. However, in spite of the differences in personalities, they were always extremely happy together. She had a keen sense of humour and could take in stride anything that A.W. and his stevedoring friends did.

One night Mrs. West and the children attended a party in Hamilton. Mr. West worked late unloading a ship, so she drove the children home and headed the horse and buggy back to pick him up. A.W. had brought to the party a bearded chief officer, who was to be their house guest, and who had never met Mrs. West. It was a wild, rainy night and the two men, tired of waiting for her, stared to walk home. When Mrs. West came along in the buggy A.W. stopped her and, in a spirit of fun, pretended not to know her. He asked what she would charge to drive them to Shelly Hall. The Wests fell in a mock argument, she asking for five dollars for the trip, he holding out that two dollars was enough. At last the chief officer, who was leaning against a tree, staggered forward snarling, “Give the old —– her five dollars. I’m tired. Let’s go along.” When he met his hostess the next morning, and recognised her as the buggy driver of the night before, he almost collapsed from shock and embarrassment. Mrs. West was delighted by the experience.

There was one time, however, when even Mrs. West might have been taken aback by her husband. One morning, while unloading a Chinese ship, A.W. saw that there were two Chinese babies on board, whom he felt were being neglected. Outraged, he paid ten dollars for one and put the baby in his buggy to take home. Then, unable to bear leaving the other baby behind,  he went back to dicker for it too. However, Customs officers, who had been alerted, stepped in and persuaded him to give both babies back.

During his fifty years of stevedoring A.W. has, as he says, “loaded and unloaded enough merchandise from ships to sink the Island.” He has also, for the same number of years, devoted a good deal of his time to his lily business. Bulbs are not exported, but he ships thousands of boxes of lily buds all over the world. He also has, on his 18 acres, strawberries, hundreds of banana trees and a fine orchard of citrus trees.

During his lusty life he has aways gone in for sports, including, in his younger years, cricket and horse racing. In 1911 he play cricket in Canada, the U.S., and practically every field in Jamaica. At that time he was playing with the Melbourne Cricket Club and later with the Hamilton Cricket Club. He also was one of the founders of the Harrington Sound Dinghy Club. In spite of all sports activities and running two businesses at once, he also found time to act as a church warden. During World War II he was with the Labour Board. And for many years, A.W. was on the Board of Agriculture when Mr. E.A. McCallan was the director.

A.W. is at all times a complete individual, a man of decided opinions and a generous heart. As one taxi driver put it, “There’s no one like him on the Island. He’ll chew you off one minute, and then turn around and give you all the money he’s got in his pockets.”

Being in his eighties has not slowed A.W. down too much. Last year, overtaken by his old ailment wanderlust, he took his daughter Phyllis on a trip to the West Indies. On his return, another daughter, Marion, wrote wistfully from Illinois that she wished she had been able to go along. Characteristically, A.W. immediately repacked his suitcases and cheerfully took her on a trip to the West Indies too.