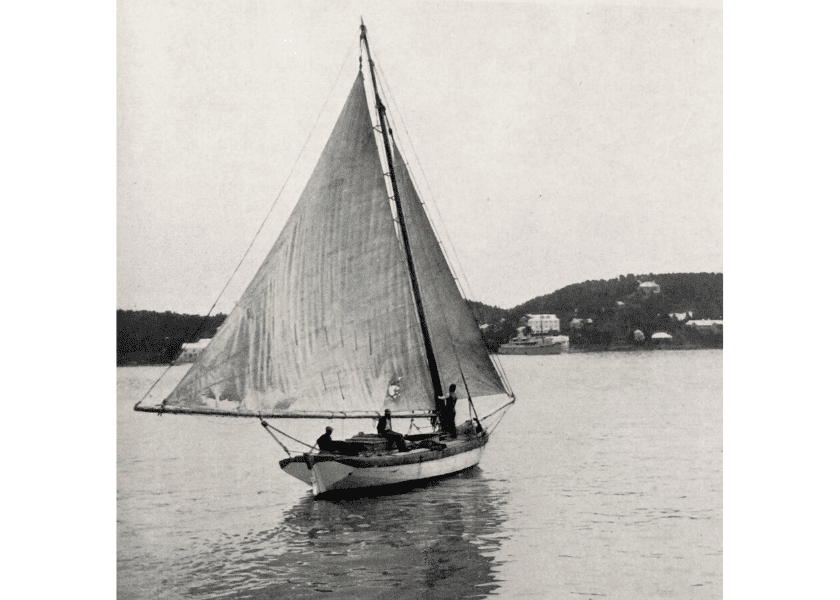 The Teaser, over a century old (in April 1932) has carried Gosling’s rum for fifty years.

Sailing on the Careen

Incredible stories of cleaning old Bermuda windjammers before the days of dry-docks. This article first appeared in the April 1932 issue of The Bermudian.

Each day during the working week an old white freight boast under an enormous spread of canvas may be seen ploughing her lumbering way from Mangrove Bay, Somerset, across Great Sound to the docks at Hamilton and returning whence she came. Only when hurricane conditions make the trip impossible does this stout old veteran lay off duty.

No living person remembers when the Teaser was built. For the past fifty odd years she has been carrying Gosling’s rum and ale to Sandys, but for long before that she made her daily trip. Long ago she was used as a pilot-boat at St. George’s, her first known owner being Pilot Gilbert, long since deceased. The late Mr. E. C. Crawley possessed her for many years until she became the well-beloved mistress of Album Anderson, her present owner, a wiry, wind-bitten mariner who himself skippers the boat.

Sometimes, the Teaser is compelled to turn back to Hamilton, but only because the keeper of the swing-bridge that spans the cut between Somerset and Boaz Island considers the weather conditions too dangerous to permit the passage of the boats through the bridge. Then again, the Teaser occasionally finds herself becalmed far from her home alongside the old Public Wharf in Mangrove Bay, and then Album Anderson and his crew are compelled to row her back. This is an operation that generally takes four hours; however, with the Teaser’s bottom clean it has been done in three.

She is, without a doubt, the oldest boat afloat in Bermuda waters. John Lee, an ancient labourer, remembers when she lay in Long Bay. Lee, by the way, is ninety-two years old, still walks three miles to his work in H. M. Dockyard in Ireland Island and the three miles back in the evening; he never misses his daily tot of black naval rum. Distinctly he recalls the days of his early boyhood when he used to dive off the Teaser’s bowsprit into the clear waters of Long Bay.

Boats like the Teaser are not built today. Her double four-inch fingers are of fine Bermuda cedar, which is of incomparable durability. She is no more than 38 feet long, but her bowsprit projects 15 feet beyond her stem, while her gigantic boom sweeps out perhaps another fifteen feet abaft her stern. Her mast is 48 feet high and is easily distinguished from all other craft in Bermuda by its truly majestic rake.

Skipper Album Anderson says that the Teaser has not been out of the water for more than a century, and if you care to swim underneath her and grope among the festooned sea-growths and barnacles that cover her hull you can pluck out a handful of cedar, soft as sponge, from her huge timbers.

Not that she is never cleaned, however, for when her bottom becomes too encumbered it is scraped while the boat is “sailing on the careen.” This is a term applied to the practice of old Bermuda windjammers before the days of dry-docks. Hawsers are bent on to the mast-head and turns taken around the capstan ashore. The vessel is then hailed over on her side, exposing half her bottom. The careening gear is secured and that side of the vessel scraped, cleaned, and perhaps given a coat or two of paint. If necessary, fresh caulking may be hammered into her seams or even new timber. In the case of the old warships all the vessel’s guns would be shifted over to the depressed side to relieve the strain on the masts. Sometimes faulty moorings when “sailing on the careen” resulted in serious accidents.

On the 13th of October,1833, a tiny paddle-steamer, the Marco Bozzaris left New York bound for South America. Perhaps she was the first steam-boat to attempt such a hazardous voyage. Bermuda had not yet seen a steam-propelled vessel, and less than twenty years before, Stevens had launched the first paddle-boat.

Sutton, the owner-captain of the Marco Bozzaris, had determined to use the ship on a regular service between Buenos Aires and Montevideo. His plans were unavoidably altered when the ship, after twelve days at sea, grounded on the reefs off St. Geroge’s and sprung an minor leak near the keel. She was hauled off easily at high tide and towed into St. George’s Harbour to be repaired. The only way this could be done in Bermuda was to “sail her on the careen” near the shore.

The Marco Bozzaris was accordingly hauled over on her beam ends and a new plank inserted. The work was barely finished when the sailors working beneath her heard an ominous cracking and scattered incontinently from under the quivering keel. The next minute both masts snapped at their bases and the ship righted herself with a terrific plunge.

Later, the Marco Bozzaris was paddled up to Hamilton where the road now called Front Street, lined with Pride of India trees, was crowded with pigs, chickens, horses, slaves, and astonished Bermudians come to see their first steamer. Evidently, Captain Sutton abandoned his intention of proceeding to South America for in the following year it was advertised in the Royal Gazette that the ship, offering “superior and extensive” accommodation would take a number of passengers to New York.

Another case of inadequate mooring gear when “sailing on the careen” had more fatal consequences. In the Spring of 1808 His Majesty’s ship Tartar was lying at Murray’s Anchorage, named after Admiral Murray who charted the spot. One pleasant night an elaborate naval ball took place in the Old Town. The sea was without a ripple, the sky clear and promising, and the captain and his senior officers left the ship to attend the celebration ashore, leaving a midshipman in charge of the vessel.

Bermuda spring weather, although superb generally, is difficult to forecast with anything like assurance, which is the reason, no doubt, why the local papers have the quaint practice of publishing the weather conditions for the preceding day instead of the succeeding one. Anyways, before dawn broke a snorting nor’wester was whipping up the sea with hurricane velocity, and the Tartar laboured heavily at her anchorage. No boat dared venture out through the white-caps and the captain and his officers could not rejoin the ship.

The young middie aboard the Tartar recognized his danger when the vessel began to drag her moorings, and being a good sailor, he slipped the cable and bolted for safety to the open sea. When almost clear of danger the Tartar flung herself upon a reef, lay over on her side and suffered the pounding of the breakers until the gale abated. She was taken into the dockyard at St. George’s and moored alongside Penno’s Wharf, which at that time was known as the Careening Dock. Expert shipwrights were imported from Halifax to repair her shattered timbers.

The Tartar was carted to expose her hull, and large pontoons were constructed and maneuvered beneath the ship. Probably a score or more workmen set about repairing her, for it was urgent that she should be ready for service as swiftly as possible owing to reports that Spanish privateers were having near the islands contemplating a marauding expedition.

The careening gear was badly manipulated, or the ropes were rotten, for suddenly, without the slightest warning, a couple of hawsers carried away, releasing the vessel which crashed down to an even keel, obliterating the crowded pontoons in one fell stroke. Not a single man escaped death.

Three-quarters of a century later labourers were set to work preparing a site for a warehouse on White’s Island, sometimes called Kerosene Island, which lies across the harbour from Penno’s Wharf. They came upon a grisly mass of souvenirs of the Tartar tragedy when they unearthed a few feet below the surface of the soil, a dozen or so human skeletons within an area of less than twenty square feet. The bones, some of which were crushed, showed a friability that indicated their great age and no doubt was entertained that they were the remnants of the victims who perished when H. M. S. Tartar “sailed on the careen.”