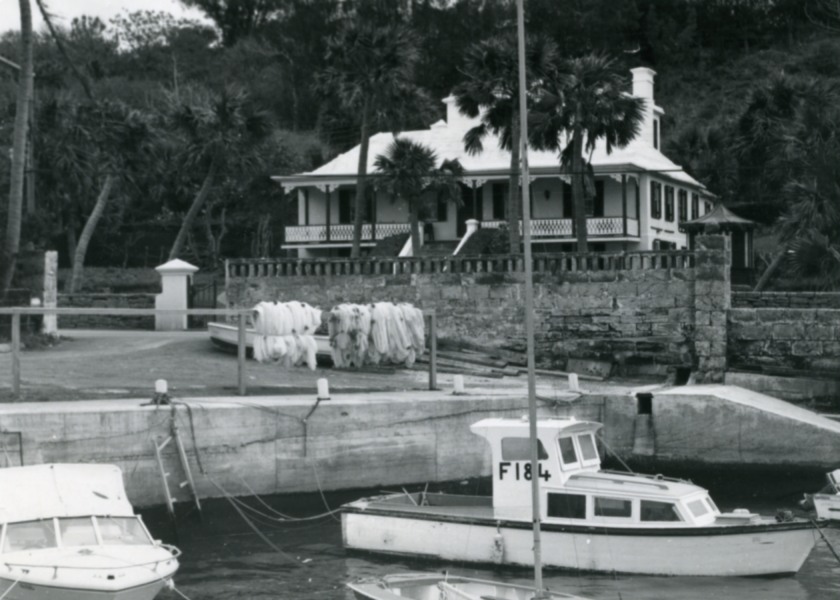 This article was taken from our archives. It originally appeared in the May 1990 issue of The Bermudian. It appears here exactly as it did in print originally.

Bermudians were sailing their own ships as early as the 1630’s. With the failure of either tobacco or pearls, upon which the Bermuda Company had pinned its economic hopes, to become a profitable export crop, it became apparent that the sea was almost the only alternative. Fishing, of course was an obvious food resource, but not a commercial possibility. The Yellow-wood tree, a cash crop while it lasted, was reduced to near extinction by mid-century. Cedar was not considered a desirable cabinetmaker’s wood in Europe and so survived to become one of the finest woods in the world for small shipbuilding.

Virtually driven onto the sea by force of circumstances it didn’t take the early Islanders long to become adept. It took a little longer, perhaps, for anyone to recognise the value of the cedar built ship or to realise the skill with which our little ships were designed and built. Accordingly substantial wealth from shipping didn’t arrive in the hands of our sea-captains and ship­owners until the very end of the seventeenth century. The first considerable fortunes were probably gleaned from privateering licensed during the war of the Spanish Succession.

These fortunes built Bermuda’s earliest grand houses. In fact quite modest by today’s standards they were as sophisticated as almost anything being built at the time in the non- Spanish new world. Many of them still stand and are the pride of their owners and of the Island to this day. They are not, however, of the kind that were actually used by their owners in the course of their shipping trade; they were conscious attempts at mansion house building, with the desire to impress a major part of the concept.

The real seafrarer’s house, the house of traders and ship ownning families rather than those of hired captains who could as easily lived inland, followed in the footsteps of the mansion houses quite quickly. The Norwoods, Tankfields, and Inwoods being both comfortable to live in and fairly impressive for entertaining, weren’t very useful when it came to coping with the rewards of a successful voyage because they lacked the necessary large storage capacity and were not situated directly on their own docks where the freight was unloaded.

The route generally followed by the Bermudian traders was up and down the east coast of North America and south into the West Indies, though voyages to Europe were not uncommon and records show that occasionally our ancestors ventured very much farther afield. The key ingredient of this trade was salt from the Turks Islands, which Bermudians were able to go and rake free in their “sub-colony” for almost the whole of the eighteenth century. Traders sent relations and employees to spend half the year salt raking and some families eventually settled there permanently. Other imp otant trading staples were pitch from Trinidad, cod from Newfoundland and Nova Scotia (for which the salt was a necessity), spices from the West Indies, and agricultural and manufactured products wherever a cargo could be picked up. Bermuda, which produced nothing but the ships themselves, had no part in the route at all except as a shelter from bad weather.

The ships came home but rarely; when they did they were laden with the profits of long voyages of many months, sometimes more than a year. The profits were largely in goods that the captain thought could be sold in Bermuda, as well as furniture and clothes for his own family. What was absolutely necessary, and not available commercially, was somewhere to store it until it could be sold.

There must have been some form of seventeenth century storage facilities,perhaps half-timbered, palmetto thatched, warehouses, but none survive and they could not have been very satisfactory. The next spate of housebuilding took the need for storage facilities into account. The example was already to hand in the older one room wide farm house built on the side of a hill to conserve valuable arable land and take advantage of the stone and added strength given by the site. Under the living floor was a basement level for storage and, usually, cooking. This plan was translated directly to the harbourside all the way round Crow Lane (now Hamilton Harbour), Heron (now Riddell’s) Bay and Port Royal and round into Ely’s Harbour. St. George’s, being the administrative centre and, accordingly, where custom revenues were collected, wasn’t so well endowed with this type of house. Captains could slip up to the west and get their cargo ashore well before the collector of Customs could get at it. This problem eventually led to the shifting of the capital to the new town of Hamilton.

The National Trust’s Headquarters at Waterville at the End of The Lane is a fairly early example of a house where cellars were built as warehouses for the island’s early merchantmen who needed storage space for their cargoes.

Unlike the farmhouses these dwellings built over warehouses quickly became fairly elegant and more complex than the farmer’s equivalent. The National Trust’s headquarters at Waterville at the End of the Lane is a fairly early example of this kind of house, and though it has been substantially added to after it was first built, almost all the expansion seems to have occurred in the eighteenth century. The run of houses along Pomander Road, which was a small shipping and commercial village in the eighteenth century, were all built for this kind of use and almost any eighteenth century house down by the water all the way up the harbour and around the sound to Watford bridge probably had a similar origin. Probably the most important surviving example in this area is Queen of the East on East Broadway.

Spithead, the home and, warehouse of the celebrated Hezekiah Frith and featured in this issue, is one of the most noticeable examples, but the most interesting and beautiful are to be found around Salt Kettle and from there along the shore toward the eastern end of Granaway Deep. It seem likely that the silting, with which we are familiar at the End of the Lane must have been an early problem for it seem that the little commercial centre that started there, was relatively short lived.

Probably none of these houses retain their storage floor in its original warehouse condition. Waterville had a brick floor in some of its lower level within living memory, but most have been radically altered to suit the changing, and richer, way of life of their modern owners. One of the most handsome of these houses is Blackburn Place at Darrell’s Wharf. The  warehouse level is today an elegant entrance and living area, and the house presents an imposing dignity that it must totally have lacked in its original form. The adjacent Marine Villa is less changed, probably because the warehouse level is directly on the road and so less desirable for living purposes. It still has its entrance facing away from the water on its upper level in a way that may well have been the original layout at Blackburn Place.

Another house whose entrance has not been changed is along the road near the Lower Ferry, Casa Rosa. One of the largest and least altered example of these houses is a great three story (from the water) house at Riddell’ Bay. This house, and the way it was designed to be used can easily be seen directly across from the public dock at Riddell’s Bay and is worth the trip. Another such house, far out on the point, beyond the golf course, ,will poignantly remind us of how isolated the life of the wives and children of these seafarers must have been. With all but the older adult men in the family likely to be away for long stretches of time, their little shisp generally no bigger than the larger ocean racers of today, the women and children left at home had to make their farmland and what they could catch fishing suffice for their needs. While material possessions were in fairly liberal supply from the success of the seafarers, day to day life must have been of the plainest and most spartan, barely more than they could extract from their land.

The wealth that we see left from that century is so visible because all that it could be preserved in was the house and its furniture. Investment was in more ships for more trading, and to replace those ships lost (uninsured) in storms. We are lucky that so much wealth was generated and that there was so little else to spend it on than the remarkably handsome houses back to which they brought the proceeds of their voyages. Bermuda has a wealth of unique architecture and an amazing amount of lovely furniture realised from these voyage of our seafaring ancestors.