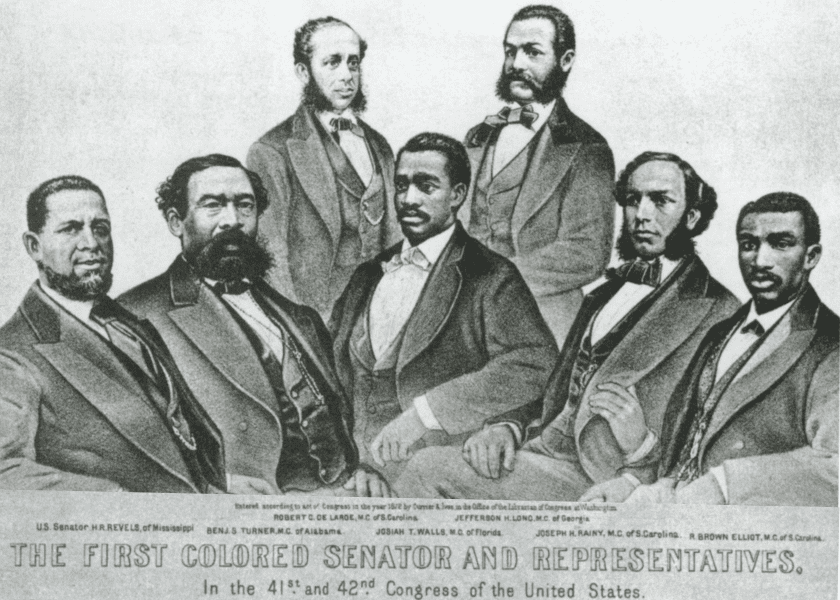 The Barber of St. George’s

This article was taken from our archives, it appears here just as it did in September 2003.

Joseph Hayne Rainey, who earned a place in history when he became the first black Congressman in the U.S., got there by way of Bermuda. In the picturesque streets of St. George’s, which is now a World Heritage Site, there are many ghosts of history. On Petticoat Lane, for instance, you can almost hear the running of silk petticoats worn by newly freed black Bermudian women on Emancipation Sunday in August 1834. On Barber’s Alley, Joseph Hayne Rainey cut the hair of town notables and visiting seamen while the American Civil War raged on in his homeland.

A portrait of Rainey

Joseph Hayne Rainey doesn’t have as big a grip on the U.S. imagination as Fredrick Douglass, the former slave who achieved celebrity as an author, orator and abolitionist. Neither does he have the same swashbuckling appeal as a fellow Southerner from the same era, P.B.S. Pinchblack, who became America’s first black governor.

As the first black person to win a seat in the U.S. House of Representatives, Rainey was a trailblazer just the same. He is the American counterpart of William Thomas Henry Joell, who was elected Bermuda’s first black parliamentarian in 1883. Rainey led the way for generations of African-American political figures—and he got to the U.S. Congress by way of Bermuda.

It’s been nearly 140 years since Rainey walked the streets of St. George’s, but Barber’s Alley and the Rainey Memorial Room in the Bermuda National Trust Museum’s Tucker House are lasting reminders of his Bermuda sojourn. The Rainey Memorial Room doubles as a period kitchen and Rainey tribute and contains memorabilia related to life in Bermuda and his career as a U.S. Congressman. Rainey is believed to have run his barber shop in or near that room.

Rainey’s Bermuda connection was directly related to the unfolding drama of the American Civil War in which Bermuda played a significant role. He was born a slave in Georgetown, South Carolina in 1832. When Rainey was 14, his father purchased freedom for his family and moved them to Charleston, where both father and son worked as barbers. In 1861, the Civil War broke out and the following year, the Confederacy began drafting free blacks to build fortifications around Charleston. To escape the draft, Rainey and his wife Susan, a free Philadelphia black who was originally from the French West Indies, fled to Bermuda on a blockade runner.

And Catherine Lynch Diechmann, author of the Bermuda National Trust publication Rogues & Runners—Bermuda and the American Civil War, tells of how the Southern states “devised a plan to use neutral ports in the Atlantic, the Caribbean and Mexico as staging areas for these ‘blockade runners’. Goods from Europe would be shipped to these ports in large ships and then reloaded to the smaller faster vessels for the final leg, which required they get around the blockage of southern ports erected by the North.

Packwood writes that St. George’s had “an excellent harbour” that gave blockade runners “quick access to the open sea.” Bermuda’s role was in violation of the British stance of neutrality, which the Island, as a British colony, was legally bound to follow. But then, as now, Bermudians were never ones to ignore opportunities for making money.

Deichmann writes: “Bermudian businessmen were eager to take advantage of the situation. Commercial and cultural links to the South, coupled with the chance to make a profit in an otherwise stagnant economy, sparked their enthusiasm.”

For African-Americans living in bondage in the South, the Civil War raised hopes of freedom. According to Diechmann, slaves and free blacks sought to escape the south by stowing away on blockade runners. Once they reached British soil in Bermuda, they petitioned for their freedom. Charles Allen, the U.S. Consul in Bermuda, sponsored eight escapees, most of whom sought passage to New York to begin new lives in the North.

Rainey was a steward on a blockade runner—he and his wife arrived in St. George’s in 1862. They found a bustling town where jobs on land and sea were plentiful and wages high. Skilled barbers were in demand so Rainey, who was 30-years-old, set up his “saloon” on Tucker’s Lane, or “first cross street West of the Main Guard.” That address for what is now Barbers Alley was in an advertisement that appeared in The Royal Gazette July 11, 1865, promoting “Hair-cutting, shampooing, and shaving, executed in artistic style.” Rainey did women’s hair as well, but in their own homes.

Susan Rainey, a dressmaker, also advertised her services. She described her business as a branch of Mme. Demorest’s Emporium of Fashion in New York. She sold ladies’ and children’s wear and did ladies’ hair “dressed in all modes.” Her clients, says Deichmann, included the leading ladies of St. George’s. Packwood wrote that Rainey could keep up with news about the war from seamen who frequented his barber shop. He also used the time to improve his education. “Legend has it,” wrote Packwood, “Mr. Joseph Ming Hayward corrected Rainey’s exercise books while waiting for his turn in the chair.”

The Raineys found Bermuda a fascinating place, according to Packwood. Slaves had been free for 30 years and the couple participated fully in community activities. Rainey became an Oddfellow, and as a member of Alexandria Lodge, he seconded a resolution of condolence sent to U.S. Consul Allen and to Anglo-African newspapers in New York on the assassination of President Abraham Lincoln in 1865.

When in the same year, a yellow fever epidemic brought life in St. George’s to standstill, the Raineys moved to Hamilton, where Joseph Rainey found work at the Hamilton Hotel as a barber and bartender. There he met up with a Confederate agent Dr. Luke Blackburn, who had been his shipmate on a voyage to Halifax. When Blackburn was charged, in an early case of biological warfare, of attempting to ship the clothing of yellow fever victims he had treated in Bermuda to New York in hopes of starting an epidemic there, Rainey was called to give evidence. The case was dismissed for lack of evidence.

The Civil War ended on April 1865, and the Raineys sailed to Charleston the following year. In 1867, he returned to his birthplace in Georgetown, where he became a member of the Republican Party. He was subsequently elected to the state Senate and served for four years. In 1870, he was nominated to fill a place in the U.S. House of Representatives. During his campaign, he told blacks that in order to correct wrongs and injustices, they had to make their power felt at the ballot box. Packwood writes that controversy surrounded the name of the first black person to sit in the House of Representatives, but historians now agree it was Rainey. He was sworn in on December 12, 1870, a month ahead of another black who was elected from Louisiana. He held his seat in Congress from 1870 to 1879 and was based in Washington D.C. During his time in the House, he spoke in favour of civil rights for blacks against the Klu Klux Klan.

He was 46 when he lost his seat and became the internal revenue agent of South Carolina, a post he held from May 1879 to 1881. He then worked in the banking and brokerage business, but failed to find success in that area. In poor health, he returned to South Carolina, where his wife opened a military shop to support the family. He died on August 2, 1887 at age 55. A newspaper obituary described him as “the most intelligent of the South Carolina Reconstruction politicians.”

On the 100th anniversary of Rainey’s death, the Bermuda Government, through its Cultural Affairs Department, planned a tribute and launched a search for his descendants. None came forward, but one year later, in 1988, his great granddaughter Valerie Rainey Wingate, and her daughter Joann Robinson arrived in Bermuda. Valerie Wingate told the Bermuda Sun Susan Rainey was alive when she was a child and had spent her last years living with an unmarried daughter in Massachusetts. Maude Carlington, a Tucker House guide, remembers showing both women around the Rainey Memorial Room. Carlington says African-American tourists are always delighted to learn about the Raineys.

The barber of St. George’s continues to attract tributes more than a century after his death. Barber’s Alley is now part of Bermuda’s African Diaspora Heritage trail. In April of this year, The Royal Gazette reported the U.S. Congress will hang a portrait of Rainey in the Capitol building in Washington. In Rainey’s hometown in Georgetown, South Carolina, his Congressional office is to be recreated in the Rice Museum as part of the Rainey exhibit.

Rainey, according to contemporary reports, was described as being “a light mulatto with regular features, bright genial eyes, and a profusion of silky hair. He was of medium height, with a graceful and easy carriage and with very small hands, which he used affectively in gesturing.”

When the Raineys left Bermuda, they took out an ad, “expressing their thanks to the inhabitants of St. George’s for the patronage bestowed upon them in their respective branches of business.”

And what did Bermudians think of Rainey? “He was,” Packwood writes, “invariably courteous to everyone, a good listener, a hard worker and possessed a strength of character.”