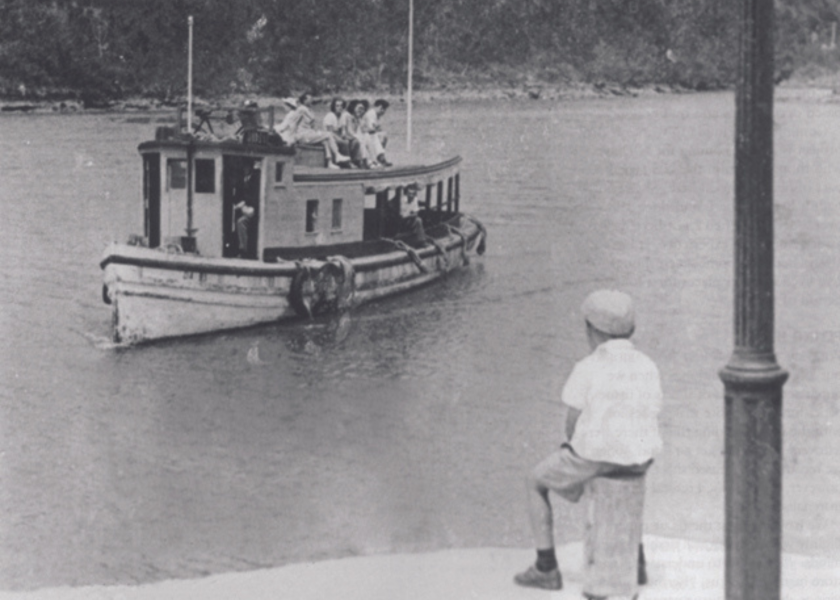 This article was taken from our archives. It first appeared in the May 2000 issue of The Bermudian. It appears here exactly as it did originally.

A St. David’s islander remembers a ferry that is no more.

It is difficult, nowadays, to imagine that St. David’s Island was once separated from the rest of Bermuda. Today, St. David’s is connected to St. George’s by the Swing Bridge, and to the rest of the Island by the roadway built by the U.S. as part of the Base, beginning in 1940. Some St. David’s islanders, however, can remember a time when the only method of transport to the mainland was by boat. For many, that boat was the Daisy, a ferry that plied the waterway between St. George’s and St. David’s for more than 50 years.

According to E. A. McCallan in Life on Old St. David’s: “In the course of time St. George’s Island and Long Bird Island in the East, and Somerset Island, Watford Island, Boaz (one time Gates) Island and Ireland Island in the West were joined to each other and the Main by bridges, and the people of St. David’s thus became the most isolated community in Bermuda.

“The distance across Town Harbour to St. George’s Town was short, being only a mile from the Willows (now Villa) and less than two miles from Great Bay, but in windy weather the passage might be rough, and until late in 1895 small boats were the chief vehicles of travel to and from the Island. To an Islander a boat was almost as essential in his family life as a bed or kitchen table.”

The Daisy made stops at the Berkshire, which housed U.S. workers during the 1940s.

But not everyone in St. David’s owned a boat-there was a need for public transportation. In 1895, Charles B. Christianson and George F. Richardson solved this problem by introducing a ferry service between St. David’s and St. George’s. McCallan writes that the Daisy, which was a steam­er, weighed about eight tons and was brought to Bermuda from New York on the deck of the Quebec Steamship Company’s Orinoco.

McCallan continues: “The Daisy made her first run from Market Wharf, St. George’s to the Island at 6 p.m. on 15th October, 1895. That evening a party of St. George’s business men chartered her, and crossed the Harbour to a fish-chow­der supper at Tucker Hayward’s house; at the East End a concert was held in the bar of John Benjamin Fox. In this way was the beginning of the ferry service marked.”

Wilfred “Buster” Hayward, 85, a distant relative of Tucker Hayward, remembers riding the Daisy from Church Wharf to attend school in St. George’s as clearly as if it were yesterday.

“The dock was just below my house, and I, like most other children in St. David’s would take the ferry to and from school in St. George’s,” says Hayward. “The fare for catching the ferry started at fourpence for children and sixpence for adults. But I think that the gov­ernment subsidised the service.”

“I remember during the winter months it was dark by 7 p.m., Old Charlie (Christianson) would hang a lantern on a pole at Church Wharf when the 5 p.m. ferry came across so that at 7 p.m. the passengers would have some light on the wharf,” says Hayward.

Charles Christianson had a son who worked with him in his boatyard. The father was known as ‘Old Charlie,’ and his son was called ‘Young Charlie.’ Old Charlie was a Swede who arrived in Bermuda on a tugboat, recalls Hayward, whose aunt married Young Charlie. The business was eventually taken over by Young Charlie, who operated as many as five ships including the Daisy 2, which in the 1930s filled in for the Daisy. But the “cranky” Daisy 2 was no match for the Daisy, which was “well constructed,” “well suited for the work,” and had “a particular shape’ which was very pleasing, says Hayward. Christianson’s enterprise, was a success because they were serious about maintenance, which they carried out at their boat slip in St. George’s.

Hayward and his wife Norma live at Narrowby in St. David’s just up the hill from The Villa and Church Wharf, where he once took the ferry as a boy. A seaman at heart, Hayward spends much of his time making miniature ships. He can watch the ships from his home, a virtual museum of miniature boats, some in bottles, others in light bulbs and glass cases, while still others are hanging on the walls or resting on tables. His miniatures are made to scale with cloth sails, whaling equipment and other gear used by sailors in days past. Hayward even displays a miniature rope-making machine, made to scale from one he himself used years ago.

“Like most people in St. David’s, I always had a boat, but when the ferry was running, it was the school children and women who either worked in St. George’s or went over to shop, who used the ferry,” he says. “The Daisy was not only used to ferry people to and form St. David’s, it was also used as a delivery service for one of the grocery stores in St. George’s.

The Daisy took Barbara Roberts -seen with Husband Fred- to the church on time.

Barbara Higgs Roberts, widow of photographer Fred Roberts, has fond memories of the Daisy because she used it on her wedding day on March 19, 1942. It transported her, her parents, her bridesmaids and about 150 guests, making several trips, to St. George’s for her wedding at Ebenezer Methodist Church.

Like Hayward, Roberts rode the ferry to attend school in St. George’s. She says the Daisy was also used to transport U.S. workers who were living on an old riverboat in St. George’s from their floating home to work at the base.

“When the war broke out, the Daisy made stops at the Berkshire, which was built like a riverboat and picked up the Americans. On the weekends the men would go over to St. George’s and drink,” she says. I guess they were isolated all week and this was an outlet for them.” On Saturday nights, the Daisy made special trips to take the men back and forth until 1 a.m., although it had to be supplemented by another Christianson boat because it could not accommodate the number of men.

Robert says gasoline for the ferry was stored in 65-gal­lon barrels on the dock. She recalls the ferry would deliver groceries from Outerbridge’s and Christianson would charge the store threepence. St. David’s Islanders would pick up groceries from the wharf and take them to their homes.

There were amusing incidents as well-like the time a fre­quent traveller who used the ferry, not to go to work, but as a floating bar, fell overboard after drinking too much and had to be plucked from St. George’s Harbour with a large hook. He bought his rum from a wooden shed that was called a ‘speakeasy’ at Church Wharf.

On one memorable trip, Roberts put her cat in a burlap bag and took the ferry to butcher Charlie Paynter in St. George’s so that it could be spayed. “Back then there were no vets and my mother said I could only keep the cat if I had him neutered,” says Roberts. “That’s how people had their cats neutered in those days. The cat lived for many years after that.”

Retired customs officer Phillip Lamb also rode the ferry to attend school in St. George’s. Lamb says the ferry carried up to 60 people and ran every two hours from 6 a.m. until 7 p.m., with the late schedule on Saturday night. His grandfather Jed Lamb filled in for the regular pilot.

“The service was very regular,” says lamb. “I very seldom missed school because the ferry was not running. They must have had some very good mechanics back then.”

The arrival of the first private motor car in 1946 signaled the beginning of the end for the St. David’s ferry service, although it remained in operation until the early 1950s, according to Buster Hayward. By that time Young Charlie had sold the operation and according to Hayward, the service was never the same. As for the Daisy, after it was taken out of service in the late 1940s, it remained on a mooring for years. Young Charlie just could not bear to sell her, says Hayward.