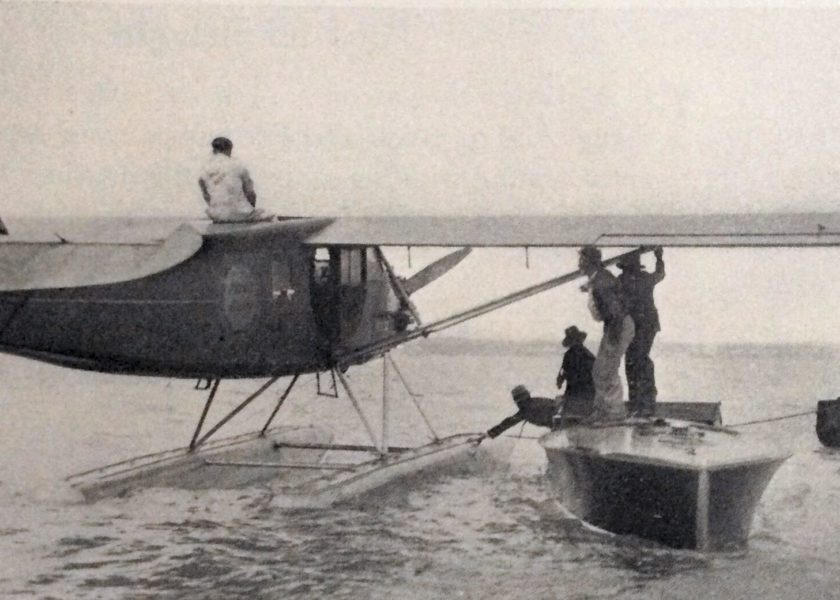 The plane lands at Murray’s Anchorage

The Very First Flight From New York to Bermuda

They left New York at 5:59am on April 1 and landed in Murray’s Anchorage on April 2 at 10am. This article was taken from our archives. It first appeared in the April-May 1930 issue of The Bermudian. It appears here exactly as it did originally.

At ten o’clock on Wednesday morning, April 2, the Stinson cabin monoplane, Pilot, powered by a 300horse power Wright engine, swooped down and settled its pontoons in Hamilton Harbour—the first airplane to bridge the 666 miles of water between New York and Bermuda.

Encountering head winds, however, the men decided to land and spend the night at sea rather than hazard overshooting their mark or making a night landing. So, at 5:59 they set the plane down on the water, sixty miles north of Bermuda, first notifying The New York Times of their decision to proceed to their destination in the morning.

Notified of their predicament The Canadian National Steamship Company’s Lady Somers, en route to Halifax, turned back and located them without difficulty. Captain Armit, Master of the ship, spoke to them and, finding them to be in no difficulties, proceeded on his way.

At 5:45 the next morning, Pilot Alexander took off again, despite heavy ground swells that were running—a great feat of airmanship—and at 6:30, the plane was forced down again four miles off the Islands because of fuel exhaustion. By taking advantage of what little gasoline remained in the various tanks, they were able to make another “take off” and this time they flew five minutes longer when they came down in Murray’s Anchorage, not far away from the point where Admiral Sir George Somers and the “Sea Venture” made a “first” landing on July 28, 1609.

First to reach them were E. P. T. Tucker and W. E. Meyer of St. George’s who went back for gasoline and at 8:45 they were off again, carrying the Hon. J. P. Hand, Chairman of the Bermuda Trade Development Board, and W. D. Richardson as passengers.

After circling over Tom Moore’s Cottage, paying their respects to William and Polly Travers, they turned and went down the South Shore and then nosed down into the Harbour, having successfully completed an epochal flight.