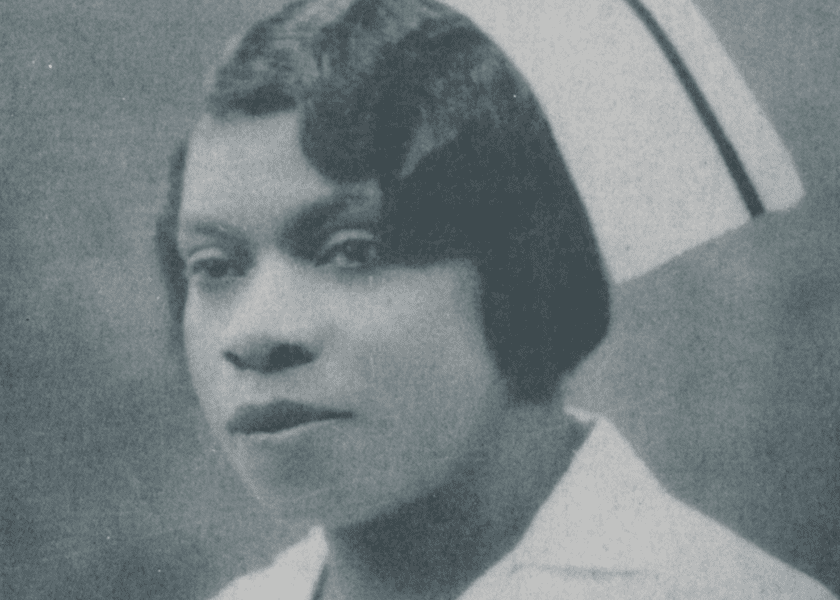 Written by: Cecille C. Snaith-Simmons, author of 'The Bermuda Cookbook' and trained nurse and mid-wife.

This article has been taken from our archives and appears here exactly as it did in May 2003.

Nurse Caro Spencer-Wilson didn’t not let barriers stand in her way, her story is a story of true grit.

When Caro Spencer returned to Bermuda in 1930, she was a trained nurse with few options. She couldn’t get work with the two main health providers of the day because of her race. The Bermuda Welfare Society, formed in 1925, provided Bermuda with its first community nurses. Nurse mid-wives were each assigned a parish and a house, and the responsibility that came with being on call 24 hours a day.

But the Society’s requirement that district nurses hold an English qualification excluded Black Bermudian nurses who were trained in Bermuda and in the United States. King Edward VII Memorial Hospital was barred to black nurses as well. The only options open to Nurse Spencer in 1930 was private duty nursing or midwifery on a freelance basis.

When I moved from Somerset to what she humorously described “her territory” our paths frequently crossed. Before long, a professional friendship developed and eventually I assisted her by taking responsibility for her patients for a few weeks each year so that she could take a well-deserved holiday. She was a cheerful, no nonsense woman who quickly took me under her wing and drew me into the circle of black nurses who formed the Bermuda Graduate Nurses Association, of which she was a founding member.

Black Bermudian nurses had formed the Bermuda Graduate Nurses Association in the 50s. KEMH was still off-limits to them, but their determination to perform as professionals within the community made them role models and mentors for those of us who joined their ranks in the 1950s and 1960s. How will I remembered those monthly meetings, which were held at the homes of members Rena Smith, Sylvia Richardson, Helen Trott and of course, Nurse Spencer-Wilson.

One of 10 children, Caro Spencer was born in 1903 to Joseph and Leonora Spencer. Her father was a farmer and a merchant. He owned a lime quarry where he employed Bermudian and West Indian workers. The family lived in a traditional Bermuda farmhouse off Clarence Road, Flatts. I remember it for its interior cedar beams. Her school friends remember the gardens, which were filled with fragrant colourful sweet peas.

Caro Spencer began her schooling under the watchful eye of her older sister Alice, who monitored her education until he was about 10 years old. Then, as she once told me, her rambunctious behaviour necessitated a move to the Temperance Hall School in Shelly Bay and then on to the Berkley Institute where she spent two years. Education was not free in that era. Temperance Hall cost sixpence per week and the young Caro knew that if she was to achieve anything in Bermuda she needed to be educated. It was with this determination that she took two jobs after school. After she left Berkeley, took a full-time post as a cook-house-keeper for Reid Trott and his family, who lived at Hillcrest, in Flatts, near her home. This position reinforced her desire to do more with her life.

The Spencer family worshipped at St. Mark’s Anglican Church, Smith’s Parish but the pew rental system that consigned Black people to the back pews offended ger even as a child, it became the deciding factor in her decision to join her friend Celeste Bean, whose parents were also Anglican, and became a member of the Bethel African Methodist Church in Shelly Bay. She remained a member of Bethel all her life, becoming one of its most dedicated and respected members

Two pivotal events in her early teens triggered her desire to become a nurse – one was the death of her mother, the other came when she was a patient at the Cottage Hospital. There for the removal of her appendix, she watched the nurses carrying out their duties and imagined herself in their shoes. The Cottage Hospital, located on Curving Avenue, was where white nurses were trained.  Black nurses did their training at the Bermuda Nursing Home in Middletown, but the young Caro Spencer set her sights beyond Bermuda.

In 1926, she, along with Frances Cann, Jane Stowe, Rita Pearman and Frances Eve, began her training at the Lincoln Hospital School of Nursing in the Bronx. Lincoln Hospital was established in 1882 by a group of public-spirited Americans concerned about the lick of hospital  care for Black people in New York. The school of nursing was started in 1898. In 1905, an affiliation was established between Lincoln and Bermuda, which led to the training of Black Bermudian nurses. Mabel Crawford graduated from Lincoln in 1911 and Alice Scott in 1912.

Caro Spencer returned to Bermuda a registered nurse and midwife. She sat the required local midwifery licensing exam, but got no offers from the hospital or the Welfare Society. Then a group of community-minded citizens came to her aid. They formed the Hamilton Parish Nursing Association and hired her to be the community nurse-midwife for Smith’s and Hamilton Parish. Members of Hamilton Parish Association were drawn primarily from the African Methodist Episcopal and Pentecostal Churches. Lorraine Fubler remembers attending the Association meetings with her more Inez Darrell, a founding member. She recalls meetings were held at the home of Alex and “Louie” Manders in Crawl. A weekly community clinic was held at one time in a back room of the Manders’ home and at another time in the home of Eleanor Burrows, a former teacher of Nurse Spencer.

Dr. Leon Williams, the attending physician, arrived by horse and buggy. Nurse Spencer came by pedal bicycle. She cared for the sick, and also delivered thousands of babies. She had a particular concern for unmarried mother who were shunned in her era, offering them love, acceptance and compassion. She lived in her family home, but was called out frequently at night. When the Association became concerned for her safety, member Reuben Outerbridge was assigned the responsibility of seeing she got home.

In 1966, Caro Spencer-Wilson was still involved with the Bermuda Graduate Nurses Association. By this time, racial policies in Bermuda were changing. KEMH had employed its first Black nurse, Barbara Wade, in 1958. In 1963, Leonie Harford became the Bermuda Welfare Society’s first Black nurse, hired for the parish of Sandy’s. And Sylvia Richardson, a friend and contemporary of Spencer-Wilson’s, became the first Black nurse to work in the Health Department. Spencer- Wilson and the other members of the Society were seeking to become affiliated with the International Council of Nurses, based in Switzerland. The King Edward Hospital Nurses Association had also applied to join –  but the ICN would accept only one organization per country. This forced the two groups to become one integrated body, the Bermuda Nurses Association. The meetings leading up to their amalgamation were frequent and fruitful.

I looked forward to attending those meetings with Nurse Spencer- Wilson. She was unafraid of challenge or change – she was the first black woman to own a car in Hamilton Parish. She became involved in the Hamilton Parish Political Association, an offshoot of the Hamilton Parish Nursing Association She was action during the Dr. E. F. Gordon era and worked with the labour leader as he struggled to break down racial barriers on all fronts in Bermuda. Gordon successfully petitioned Parliament for finds from the Hamilton Parish Nursing Association. Her nursing practice was a busy one and she cared for white and Black patients. She found time to stress the importance of the vote and canvassed for Hilton Hill an Walter Robinson in their bid to become parliamentarians.

I, a mere novice, sat with her on the legislative committee of the newly formed Bermuda Nurses Associations. When she set her head to one side and stressed her point, KEMH matron Joan Darroch and the lawyer for the amalgamated association Ronald Burnard, had a real force to be reckoned with. Her vast knowledge of the nursing profession, the changes in the country, her insight into the future and her intolerance of racial inequality, made her invaluable in the discussions leading up to the passage of the 1968 Nurses Act.

In 1962, at age 59, Nurse Spencer married Joh Wilson, a widower, of Devonshire. She looked forward to devoting all her time to her husband and his family, but she was never really allowed to retire from nursing. In 1971, She was honoured by the people of Hamilton Parish from her 40 years of service. She also received numerous awards, including the Queen’s Certificate and badge of Honour for her contribution not only to nursing, but for her work with such groups as the Red Cross, meals on Wheels, The Matilda Smith Williams Home, the Sunshine Garden Club and the Business and Professional Women’s Association.

Nurse Spencer- Wilson told Nellie Musson, author of Mind the Onion Seed, she was so frustrated and disappointed, she applied to U.S. Consul to emigrate to the U.S. But she also spoke of helping to pave the way for nurses who came after her. “Our aim was to make things better for them… I’ve enjoyed working for and working with my people… but there was never any money in it. If I could, I would still do it all over again”.

She died in 1989, a true pioneer, who lived to see some of the racial barrier that had stood in her way dismantled. Today, the posts of director of nursing at KEMH and St. Brendan’s Hospital are held by Black Bermudian nurses, as is the post of chief nursing officer of the Department of Health, the successor of the Bermuda Welfare Society.