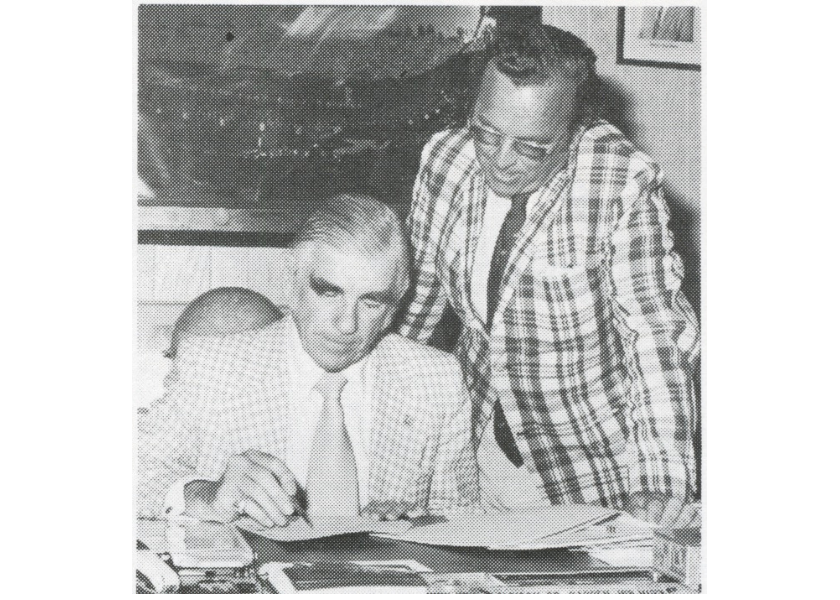 This article was taken from our archives. It first appeared in The Bermudian in July 1976.

When Baron Pierre de Coubertin, founder of the modern Olympic Games in 1896, expounded that philosophy and penned it, he raised a banner that has been a rallying point for the forces of amateurism for all time. If there is a man on Earth who has taken this philosophy to heart it is Mr. W. F. “Chummy” Hayward, M.B.E., former president of the Bermuda Olympic Association, now its life president and chief benefactor. And as if to prove the point he has carried Bermuda’s banner at the head of her contingent at no less than six Olympic Games, surely a record all of its own. Some men turn to politics for fulfilment, some men turn to the pursuit of wealth. Chummy Hayward turned to the world of sport, and he says that he will never in his lifetime be able repay the debt he owes it. In view of the investment he has made in Bermuda’s sports to date, that is really an extraordinary statement, but so typical of the man.

One of twelve children born to Mr. and Mrs. B. J. Hayward of Pembroke, Chummy hesitates in admitting he was christened Witfield Frederick. His active sports life began at Saltus Grammar School where he was educated until he was 16 and his father died. On being told he would have to leave school and take over his father’s sawmill and carpentry business, Chummy recalls that he rebelled and took what turned out to be one of the most important steps of his life. He asserted that if he had to seek employment, he would only work for Joe Vallis, head of the growing Vallis Company, a firm of commission merchants. And the following day, instead of returning to school, he did just that. He was promptly handed a broom and told to get sweeping. Now, 48 years later, he reigns as president to the firm. It is the success of the firm which has taken him from times of financial hardship to considerable wealth, but by his generous actions in more areas than will ever be known, Chymmy has shown that hs is acutely aware of the needs of those less fortunate than himself.

For such a man the Olympics clearly hold avery special appeal, probably because they represent what can be achieved through dedication to an ideal, hard work and the pursuit of excellence. A man of restless energy himself, Chummy Hayward has always had the drive to translate the dream into the deed. Where others have hesitated to tackle the major venture he has weighed the odds, made a decision, and then committed himself totally to its accomplishment. Thus he has carried his public responsibilities with dignity and with humility, and always finding it so difficult to live up to his own credo – don’t take on so much that you are ultimately overwhelmed by your own endeavours.

Recently Mr. Hayward did something that was so characteristic of him that it was almost taken for granted. He tired of waiting for other businessmen to join him in creating an Olympic Trust fund and went ahead on his own, starting the fund off with a cheque for $50,000. This money has been invested and will swell the coffers of the Bermuda Olympic Association to the tune of $3,500 a year. And, he hinted, there was more where that came from. “I always felt that when I had some spare cash lying around I would invest in sports in Bermuda,” he commented. “Well, I am in that happy position now and I aim to keep the promise I made to myself.” His example will be hard to follow, but he sees the day when the BOA will be self-supporting and be in a position to underwrite some meaningful trips abroad by our top sportsmen and women.

For such a man who has participated in most competitive or team sports, served on almost every sports committee and been awarded outstanding honours in many countries of the world, it is difficult to single out any one game to which he has devoted the most time. He started out as a first-class all rounder cricketer, football player and swimmer at school, and has maintained these interests ever since from a spectator’s point of view. He has also taken a keen interest in athletics and, more recently, in boxing. Perhaps something of what makes Chummy tick can be found in the experience he underwent in 1936 when he was invited to train for the diving team that Bermuda wanted to send to Berlin.

Young and optimistic, he devoted himself to a rigid training program, and was heartbroken when it was learned that there would not be enough money available to send an entire team. There are no prizes for guessing who it was who gave up his own chances to compete in order to organise a fund-raising drive to send a representative group instead.

His sacrifice was not in vain since the team made the Olympic and he was invited to go along as manager and “chef de mission” and to carry the Bermuda flag into the arena. He has never forgotten the two conflicting emotions of the moment, the thrill of being at the event, and the sadness at not being able to actually represent his country. Ever since then, Chummy has been a fund-raiser for Bermuda sports, because he cannot bear to see another talented youngster turned away from his dreams.

Obviously when a man of his experience talks about the Olympics, only a fool would ignore what he has to say, and it is this: “The Olympics are one of man’s finest achievements, and to be picked to represent one’s country is obviously the height of a sportsman’s ambition. The danger is often that people try to get there in too much of a hurry, as though the chance might slip away. There is no easy road to an Olympic place, it requires years of single-minded determination, and it is even then not enough just to want to go to the Olympics. The selection has got to be earned. We all have this dream that one day a Bermudian is going to win a gold medal, but this will not come through by sending a whole army of young people in the hope that one strikes gold. It will come from level-headed and objective assessment of the capabilities, both physically and psychologically, of the aspirants. This year we will be sending the largest contingent ever to the Montreal Games, and there is no doubt in my mind that we have put together a representation that can bring us back a medal or two. But let us at the same time look ahead to 1980 and the Moscow Games, and start planning best how to use the four years at our disposal to prepare our young people for the greatest of all sporting honours, a chance to compete in the Olympics, against the greatest in the world.”

The Bermudians who walk around the track on the heart-lifting opening day parade of the Montreal Games might just consider, as they glance up at the stands, that sitting up there somewhere is a man to whom they owe a very singular debt in Chummy Hayward. He founded the Bermuda Olympic Association forty years ago, and yet he is still its guiding spirit at the age of 64. He has still to get up at 4 a.m. some days to catch up with the correspondence that his Olympic involvement continues to force upon him, and there are meetings to go to most evenings. Therefore his observations are motivated not by self-interest or prejudice, but are designed to keep Bermuda’s standards as high as humanly possible, because Chummy cares.

Now he has a bouquet of his own to throw: “I have been going abroad with Bermuda teams to one function or another for forty years,” he says. “I just want to say that never once have I had cause to stop feeling very proud of the way our sportsmen and women conduct themselves on and off the field when abroad. Their sportsmanship, bearing and respect for others has always made me feel seven feet tall when I tell someone that I am from Bermuda. Perhaps this is why I love sport so – it brings out the best in people, and Bermudians are no exception.”