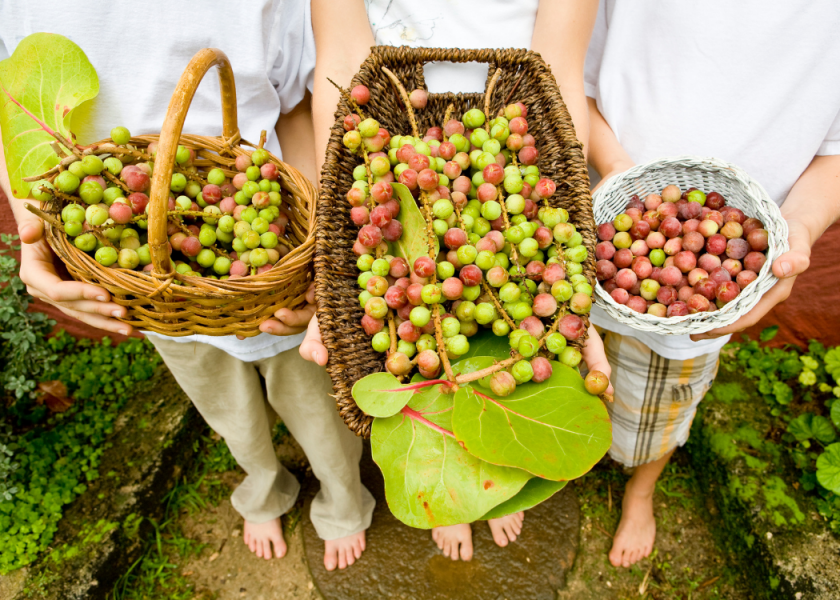 Few people associate autumnal colours with Bermuda, but that doesn’t mean we don’t have them. We do, but not in the autumn. Instead, thanks to our bay-grape tree (as well, actually, as the fiddlewood), our fall shades of copper and russet tinge our hillsides and shorelines in the springtime. That’s when the round, red-veined leaves of the bay grape turn yellow, orange and reddish brown before falling to carpet the ground.

Though the tree is technically deciduous, the branches never look bare since the new foliage grows astonishingly fast, the leaves becoming full sized in as short a time as a week. At this stage, the leaves are a soft green with pronounced red veins. As the storm season approaches, they become darker and more leathery. Sometimes they can be as large as small plates—it’s possible the first settlers used them as such. From a child’s point of view, they can make excellent Frisbees or, indeed, floating rafts. Soon the tree’s small white flowers become pendulous bunches of fruit that certainly resemble grapes of the vineyard. Turning from velvety green to dark purple by late fall, the somewhat-tart berries make delicious jams and jellies.

Unlike the invasive fiddlewood, first planted in Bermuda in 1830 at Paynter’s Vale, the bay grape (also known as the sea grape) is native to Bermuda, arriving without the help of human beings. It is also native to other countries in the West Indies and Central America. From a botanical point of view, however, it hasn’t been a Bermudian resident for that long. According to Martin L. Thomas in his Natural History of Bermuda, recent pollen studies show that the tree has been here for only about 800 years. That means it arrived here either shortly before humans or with them.

We’re lucky the bay grape did come, because it’s highly tolerant of wind and salt; after a severe storm it scarcely looks battered. It thrives on poor soil and does not suffer in drought. No wonder, then, it’s widespread on the South Shore. Sometimes it can be pruned so that it’s more hedge than tree. But left to its own devices, it can grow anywhere from 20 to 40 feet, and its trunk and branches often knot and intertwine in intriguingly crooked formations.

Interestingly, the trees also grow in Florida, where traditionally homeowners kept them thoroughly trimmed to open up the sea view. But now in certain areas it is forbidden to over trim the trees during some parts of the year. Why? Because of sea turtles, who are threatened by any kind of artificial light. A streetlight, for instance, discourages them from emerging from the ocean to nest on the beaches. Worse still, hatchlings can be so disoriented by electric lights that they cannot find their way back to the water. As a result, they die from exhaustion or dehydration or predators. And car lights are an open invitation for the newborns to be run over. Stands of bay grapes, then, provide an excellent shield against unwanted beach illumination. If our turtles do come back to breed, the bay grapes will be very useful.