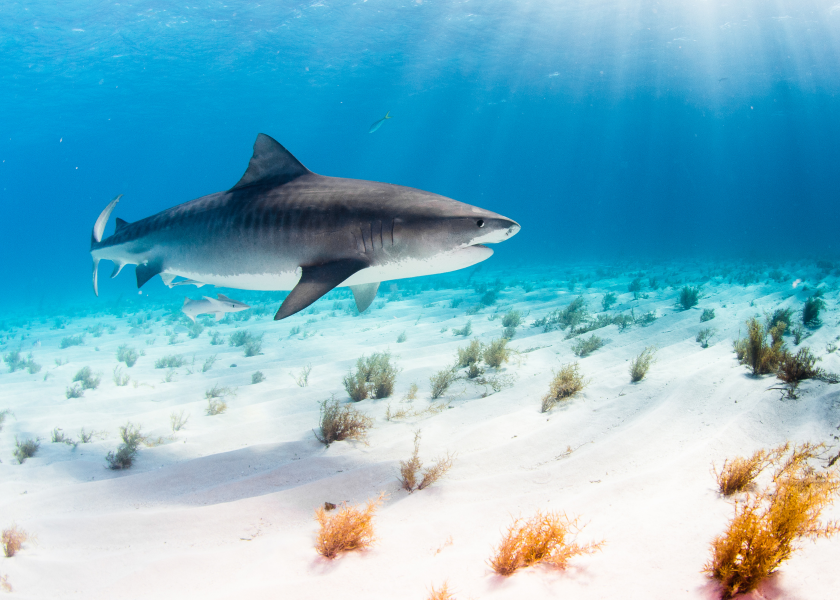 Bermuda Embarks on a Mission to Protect Shark Populations

When most of us hear the word “shark,” the much-maligned great white shark immediately springs to mind, and coming face-to-face with one of those is the stuff of nightmares. That, however, is nothing compared to what could happen to our planet if these great beasts of the ocean were to disappear.

Unfortunately, that is exactly what is happening. In the first global assessment of its kind, published by the journal Nature in January 2021, scientists found that since 1970 “the global abundance of oceanic sharks and rays has declined by 71 percent owing to an 18-fold increase in relative fishing pressure.” It goes on to warn that because of this overfishing, three-quarters of these species are now threatened with extinction. Losing these predators creates an imbalanced marine ecosystem, which in turn, threatens our food security.

You don’t have to be a scientist to notice that marine life in and around Bermuda has changed in recent years. Most obvious to the naked eye has been the increase of our sea turtle population and the decrease in the seagrass they feed on. Ironically, one of the reasons for this is the decline of the turtle’s natural predator, the shark. Fewer predators mean more turtles, more turtles need more seagrass. Seagrass isn’t just food for turtles, however. It is also a vital carbon sink and provides protection and food for juvenile sea creatures. This is just one example of the many knock-on effects of the shark’s demise.

When it comes to ocean and wildlife conservation Bermuda’s environmental community has a reputation for “punching above its weight,” so the immediate need for extra protection for our dwindling shark population has therefore come to the forefront.

Worldwide, there are over 400 species of shark and around 20 of these have been spotted in and around Bermuda’s waters. Some are more common than others, and thanks to the Bermuda Shark Project, we know the most about the tiger and the Galapagos, or dusky, sharks. Others found, or occasionally spotted, include the nurse, bigeye thresher, hammerhead, lemon, reef, sixgill, gummy, gulper, spiny dogfish, smalltooth sand tiger, shortfin mako, blue, silky, oceanic whitetip and whale shark. Even the great white has been seen, but well offshore and during the cooler months.

A certain amount of both international and local protection for these ocean creatures has been in place for several years, but this was not enough. In an effort to show global leadership as well to protect our own waters, Bermuda’s Home Affairs Minister, The Hon. Walter Roban, introduced further legislation to protect Bermuda’s shark population in March of this year. Under the new legislation, no shark can be taken by recreational fishermen, and commercial fishermen will only be allowed to take Galapagos, gummy and sixgill sharks. In order to take these “permitted sharks,” however, they need to obtain a special licence, which will have terms and conditions attached, such as catch limits. “All species are protected at some level,” says Roban.

Choy Aming, senior aquarist at the Bermuda Aquarium and Zoo and a cofounder of the Bermuda Shark Project, is relieved that more is being done to protect these ocean predators. “This new legislation is a crucial step in protecting our sharks and I think it will be very effective,” he says. “Many countries around the world are considering shark protections and this puts us in the forefront.” Aming is also one among many of what the Minister calls “very smart people” who have been advising him about international protection efforts and the development of an effective shark protection framework for Bermuda. “I don’t know of any other jurisdiction that has made this step,” continues Roban. “I’m sure others may be intending to do so, but we have done so and I am proud to know that I have a very robust Bermudian team.

“I very much appreciate the advice they give so we can make the right decisions that will support our own ecosystem, our biodiversity and the protections that are not just to stop people from doing things, but are to ensure our sustainability.”

How effective this legislation will be, however, will come down to enforcement.

In the immediate future, like all other ocean-based restrictions, fishing wardens and department of environment and natural resources employees will be responsible for enforcing the new limitations, but Roban says the enforcement strategy is under review and “there will be information about that review brought forward in the future.”

Law enforcement aside, there are things we ourselves can do to support our marine life and, according to Aming, the biggest impact we can make is through our diet. Much of the overfishing which is killing sharks is down to large fishing fleets, particularly in Asia, which, he says, are “just pillaging the seas.” Buying locally caught fish is a way in which we can help the effort to stop this. “It is incredibly important to know the source of your fish and try and eat sustainably,” he continues. “Millions of sharks are killed every year as bycatch, not even as a food source. Local fish is actually caught in a relatively sustainable manner. You know the source of the fish, the fact that they are subject to local regulations and fish are caught on rods as opposed to large indiscriminate nets. If you eat seafood, local fish is probably the best option.”

One of the reasons Galapagos, gummy and sixgill sharks were left on the proverbial “menu” was for cultural reasons. Shark hash is still a popular local dish, which the Home Affairs Minister himself enjoys. However, he agrees that we need to be more considerate about our food choices. “I like shark hash, but I also know what my obligations and responsibilities are,” he says. “I only eat it one time of the year, but I will perhaps be a little bit more mindful going forward when I look for shark hash to make sure that I’m not over-indulging. Or, maybe I’ll pass, to believe I’m helping a little bit of protection.

“As a people, as a species, we’re going to have to change a lot of habits,” he continues. “How we use our resources, how we exploit resources has to be rethought by everyone, including some of the things that we’ve enjoyed without any consideration that we might actually be contributing to the extinction of a species. We have to think about all of that. I will be thinking about it too.”

Even if you do still want to eat shark hash, it could become increasingly difficult to come by as Roban adds that fishermen have reported seeing fewer of these shark species in the ocean. “Clearly they were already at a certain level of scarcity in our water,” he says. If that is the case, should we consider even stricter restrictions? The government, it seems, is taking a pragmatic approach towards this. “There is nothing that is absolutely planned,” he says, but adds, “we keep a very strict watching brief on what happens internationally and what happens with species so we can make the appropriate steps.”

Furthermore, sharks aren’t the only marine species he is keeping a close eye on: “There have been great concerns recently about our lobster population. If we need to do things around lobsters and other species, we will consider it.” He also points out that Bermuda already has a “pretty robust marine protection framework, particularly for our inner waters” and that the Bermuda Ocean Prosperity Programme’s marine spatial plan will establish protected areas in more detail. Over time, the Minister is confident that current legislation will go some way to rebalancing the marine ecosystem, and he and his team will be monitoring the situation closely.