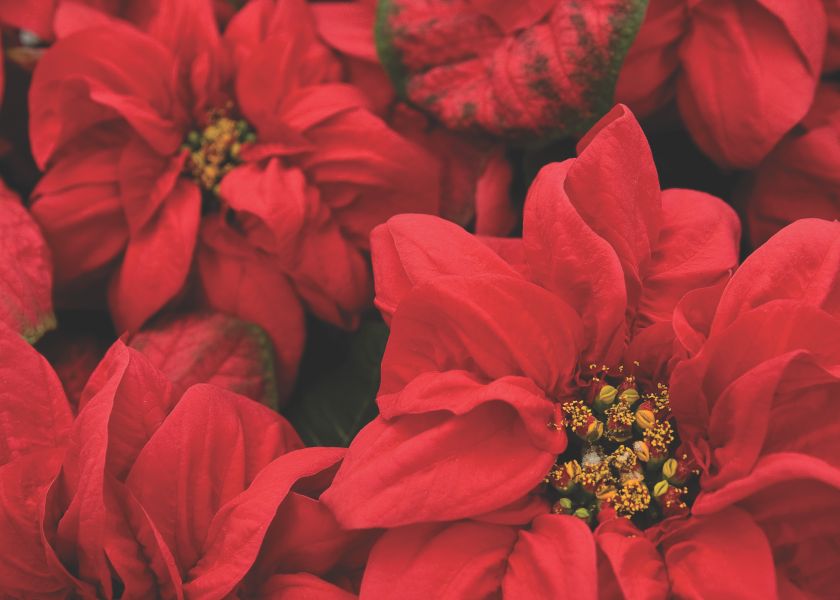 This article was taken from our archives. It first appeared in the Winter 2007 issue of The Bermudian. It appears here exactly as it did originally.

Whether they’re traditional red or white or pink, poinsettias are as much a symbol of Christmas as, well, Santa.

While sun-drenched kids splashed in swimming pools and most people strategically positioned themselves in front of ice-cold air conditioners going full-blast, local farmers went about their work whistling a tune accompanied by imaginary sleigh bells (was it “Jingle Bells” or “Frosty the Snowman”?) and dreaming of mince pies.

Well, maybe not. But the holiday season was on their minds in the midst of summer—at least in terms of that radiant floral symbol of Christmas, the poinsettia. Locally, most were planted in July and August to ensure that the flowers bloomed in time for the holidays.

It’s a good thing, too, as the demand is high in Bermuda for these merry plants. Both Aberfeldy Nurseries and Amaral Farms report that the number of poinsettias sold each year reaches well into the thousands. The plants come in hanging baskets and pots of different sizes; there’s something suitable for all budgets. Amaral Farms even offers a large poinsettia topiary for rental during the holiday season.

Nowadays, the poinsettia is associated with Christmas in many countries, but it wasn’t always so. The “Christmas flower” was cultivated by the Aztecs in Mexico before Christianity even reached the Western Hemisphere. The poinsettia symbolized purity because of its brilliant colour, and it was highly prized by kings. The plant served practical as well as decorative purposes; it provided a reddish-purple dye, and it was used as a medicinal preparation to counteract fever.

During the seventeenth century, Franciscan priests who settled near Taxco, Mexico, began to use the flowers in a nativity procession because of the poinsettia’s dazzling red colour and the specific time of year it bloomed. Soon the plant received mention in various writings, and its fame grew further when the first U.S. ambassador to Mexico, Joel Roberts Poinsett, introduced it to the United States.

But how exactly did this beautiful living thing become symbolic of Christmas all over the world? One Mexican legend tells of a child who could not afford a gift to offer Christ on Christmas Eve, so he picked some weeds from the side of a road. The child was told that a humble gift, if given in love, would be acceptable in God’s eyes. When he brought the weeds into the church, red and green flowers blossomed, and the congregation felt they had witnessed a Christmas miracle.

Now clearly associated with Christmas, the poinsettia manages to bloom at precisely the right time of year—a feat that seems nothing short of miraculous. And so the most logical reason why the festive plant became known as the Christmas flower is that Mother Nature paints the deep green leaves a brilliant red just in time for the holidays.

Miracles aside, botanists know that poinsettias need a certain amount of darkness as well as light in order to thrive (this is called photosensitivity), and the short days and long nights that occur naturally during the winter months provide exactly that. That’s why they bloom this time of year.

By the way, the showy portion of the plant isn’t the flower but the leaves. The poinsettia’s flowers are almost too small to notice. And that rumour about the poinsettia being poisonous? It’s false. Carlos Amaral of Amaral Farms says it’s probably the one question people ask him most. Still, it’s not guaranteed that consuming a couple of poinsettia plants won’t give you a slight stomachache.

But Christmas comes and goes, and we’ve all seen it: that once-glorious pot of radiant red is suddenly looking as grim as a case of the winter blues. In Bermuda, poinsettias are available for sale in early December, with a few precocious plants ready at the end of November in time for the American Thanksgiving. How long can we expect them to last? Some believe you’re lucky if your plant lives through Valentine’s Day.

Not true. These beautiful flowers can be replanted and live for years. Bobby Baron of Aberfeldy Nurseries admits, “Everything that’s growing needs a lot of attention,” but he insists it’s possible. “They can live indefinitely,” he says. “I’ve seen them grow to over six feet tall. Bermuda’s environment is very conducive to growing poinsettias.”

He says it’s best to play it by ear when watering the plant, rather than have a set schedule. Check on it every two or three days and give it a little drink if it needs it. Let the plant dry between waterings. And if you’ve replanted your poinsettia outside, keep in mind that high winds combined with a harsh saltwater spray can be detrimental.

Amaral says the plants can last for years in a home setting. “They need eight to ten hours of natural or artificial light a day,” he says, and adds, “People also tend to over water poinsettias when once a week is usually sufficient.”

Amaral Farms pinches the terminal chute when growing poinsettias. This involves pinching off the top of a branch, resulting in several more branches sprouting in its place and ultimately a fuller poinsettia.

So why isn’t your replanted poinsettia red anymore? The long night that naturally occurs during winter initiates the bright red colour, so if your poinsettias are exposed to light—natural or artificial—for too long each day, they’re going to stay green.

Red predominates in the present-day poinsettia, but other varieties include white, pink, orange and marbled. “Red dominates for sure, about 60 to 80 percent of our crop,” says Baron. “But we also have white, pink and by some fluke we’ll also have orange this year. There are also some new breeds out there.”

One new poinsettia accessory that Baron won’t be promoting any time soon is a special colour spray meant to create a sparkling finish on the plant. He compares it to showing up somewhere wearing a rhinestone suit or painting your Christmas tree blue. His American contacts insist the practice is fast becoming a hit, but Baron prefers the more traditional way of displaying a poinsettia—without the bells and whistles. After all, it’s naturally glamorous on its own. Most people would probably agree.