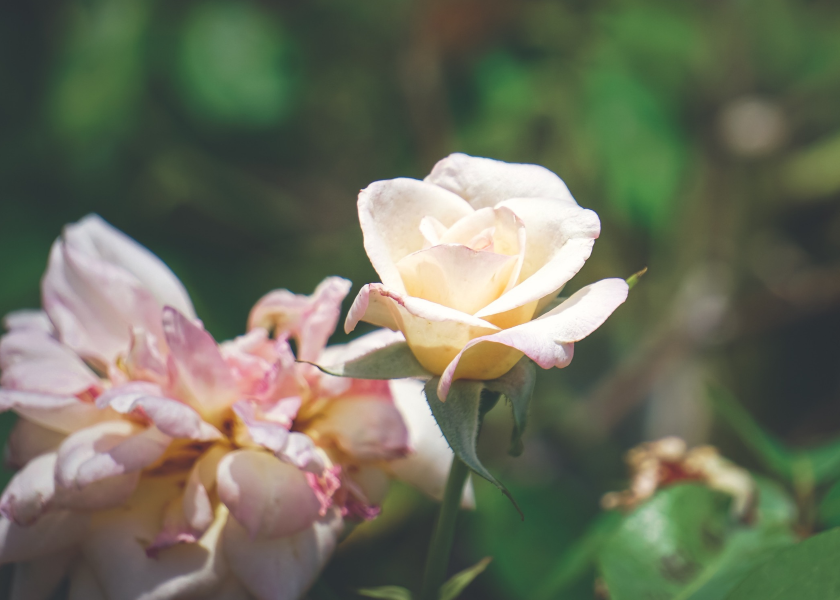 Fall in the Garden

Though roses are not indigenous to our island, they were here at least by 1639 when a shipwrecked Spanish sailor described European varieties growing in our gardens. It is likely the apothecary and damask rose were the first here. Later, in the eighteenth and nineteenth centuries, China roses, brought to Europe and America on the clipper ships, arrived in Bermuda. China roses proved to be far more suited to our climate than European ones since they don’t like frost. And many of those varieties here today are thriving, having survived decades of gales and hurricanes. Today, we have a whole variety of old garden roses including climbers and ramblers, China, noisette and tea roses. We also have hybrids.

Perhaps the most common rose growing in Bermuda today is the dark red Agrippina or cramoisi supérieur. It’s so easy to grow it has almost naturalised. Other favourites include the Slater’s Crimson China, the Archduke Charles, the Mutabilis, its blooms changing from pale yellow, to pink to dark red, and the delicate pink Duchesse de Brabant.

Particularly valued in Bermuda are roses deemed to be “mysteries” because found in local gardens they have lost their provenance. They were subsequently named after the person in whose garden they grew or after the place where they were found. Thus we have Dan’s rose named after Morris Cooper whose grandchildren dubbed him “Dan.” He propagated this pink rose from one he found at Holy Trinity Church in Bailey’s Bay. During the 1960s, Jessica Cox found a beautiful pale apricot rose in her friend Grace Atwood’s garden in Pembroke which subsequently became known as the Miss Atwood. Other mysteries include the Bermuda windchimes, the Smith’s Parish rose and the Vincent Godsiff.

Remove all the prickles and leaves but the top two sets. Cut the portion of the stem above the top leaf sets.

Moisten the end of each split stem with water and dip it into rooting compound. Shake off excess powder.

Use a pencil to poke a hole into the filled pot. Insert into the hole deep enough to cover the bottom leaf node. Gently pack soil around the stem and water.

Place plastic bag loosely over cutting to create a greenhouse effect. Make sure the bag doesn’t touch leaves by putting a stake into the pot to support it. Cut small holes into the plastic to ventilate and prevent rot. Place cutting outside in shade but with some sunlight. A porch is ideal.

Roots may form after two weeks. After six weeks, remove plastic cover and after another two or three weeks, plant into a pot filled with rose potting mix.

*Source: Roses in Bermuda published by The Bermuda Rose Society

The Bermuda Rose Society was founded in 1954 to preserve Bermuda’s roses in “a living museum” and to encourage people to grow them. Before COVID, the Society had an annual sale of Bermuda rose plants.  Check its Facebook page for a possible sale this fall.

Rose gardens can be found in the garden of the Bermuda National Trust’s Headquarters, Waterville, in Paget; in the Botanical Gardens, near Camden; and in the Heydon Trust, opposite the Heydon chapel, in Somerset.

With its single five crimson petals and yellow stamens, the Emmie Gray mystery rose was named after a Bermuda High School teacher who taught there for 30 years and from whose garden it came.

Note: Do not place near a seating area since it has a rotting meat odour to attract flies which pollinate it.