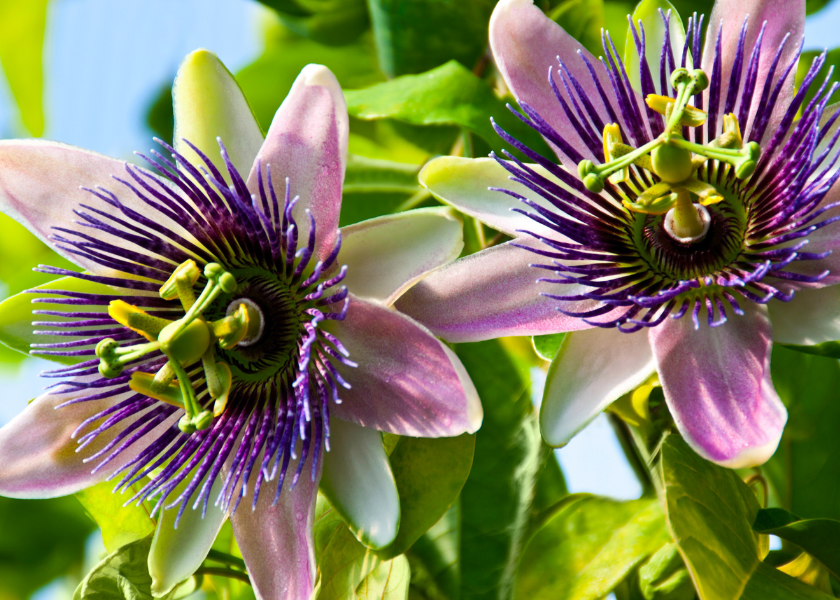 This article was taken from our archives. It first appeared in the March 1954 issue of The Bermudian. It appears here exactly as it did originally.

There are several species of the Passion Flower which thrive in Bermuda, such as Passiflora quadrangularis (the “Granadilla”), P. edulis (the “Passion Fruit”), P. laurifolia (the “Water Lemon”) and P. pectinata (the native “Passion Flower”). The latter is a very small flowered species and is found growing wild in the Harrington Sound area. In addition to these species there is another of which the writer has not been able to accurately determine the botanical name. It is the most commonly cultivated species and is referred to as Passiflora coerulea, but it is not this species because P. coerulea has leaves with five to seven lobes, whereas the species under question has three-lobed  leaves. It may however be the species to which Britton refers to in “The Flora of Bermuda,” as Passiflora stipulata.

The main subject of these notes is the commonly cultivated Passion Flower, which for want of a better botanical name I shall designate Passiflora stipulata, often erroneously called in Bermuda P. coerulea. This is a long glabrous vine with angled stems and deeply three-lobed leaves. The flowers are very showy, over three inches in breadth with rose-purple petals. The crown of the flower is violet above and purple below, with a band of white spots, and orange stamens. There is also a variety of this species with white flowers.

This pleasing and fascinating plant is frequently planted for ornamental purposes. It is easily propagated by cuttings of young shoots about six inches long taken in the spring time with a heel and inserted in a sandy compost. These cuttings should be placed in a closed propagating case or frame where they will root quite freely. This species rarely sets seed in Bermuda, but other species do, in which case plants may be raised from seed.

It is preferable to plant the Passion Flower near a trellis or a wall on which the vine may be trained. The tendrils on the stems will twine themselves around wire or thin twigs and flowers are produced in abundance for about nine months of the year. Although the flowers are short-lived, some florists treat them with wax and the flowers so treated will last for several days. In this way they are frequently used as a corsage.

Considerable interest is displayed in the Passion Flower, especially by visitors to the Colony, because of its name and legends connected with the plant. The name Passion Flower was given to this plant by the early missionaries in South America, in allusion to the fancied resemblance in the blossoms to the implements of the Crucifixion. The ten colored parts of the floral envelope were thought to represent the ten apostles present at the Crucifixion. Inside the corella is a showy crown or corona of colored filament taken to represent the crown of thorns. The stamens are five, to some suggestive of the five wounds, by others thought to be emblematic of the hammers which were used to drive the three nails; the nails being represented by the three styles with capitate stigmas. The long coiling tendrils represent the cords or scourges and the digitate leaves suggest the hands of the persecutors.

A very interesting legend of the Passion Flower is to be found in Folkards Plant Lore, Legends and Lyrics, which refers to Passiflora coerulea of the South American forests. In one passage of this legend the Spaniards referred to the Passion Flower as the “Flower of the Five Wounds” and “suggested it had been designed by the great Creator that it might, in due time, assist in the conversion of the heathens among whom it grows.”