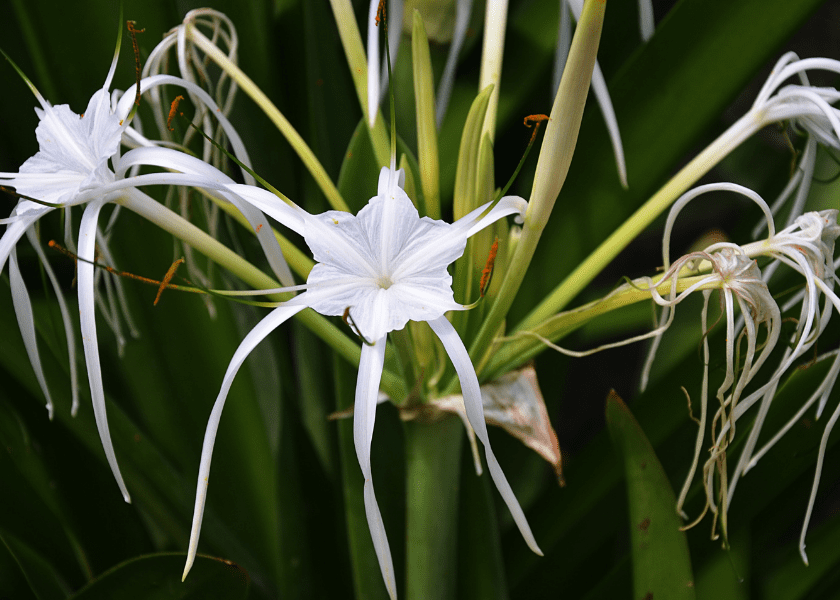 Did you know the spider lily is not a true lily at all? It belongs to a genus called Crinum. This plant family is known for its ability to withstand salty, wet environments without comprising its striking blossoms. A single plant can have a flowering period that lasts between four to five weeks.

This article was taken from our archives and appears here exactly as it did in March 1952.

It is easy to see how the name “Spider” lily became attached to this plant. The term ‘lily’ is frequently and often erroneously applied to a plant with a bulbous rootstock and white flowers, and sometimes the plant in question has no relationship whatever to the lily family. However, the flowers of the above plant (which is not a true lily) certainly resemble those of a lily, while their form conveys the impression of a huge white spider sitting on the end of a flower stalk. Botanically, the plant is known as Hymenocallis declinata.

This plant is seen at its best during July and early August, growing along the roadsides, on the coastal banks, and in practically every home garden. Although not a native species it has become naturalised in Bermuda. It was originally introduced from the West Indies. The conspicuous white flowers are borne on stems about thirty inches long. From three to ten separate flowers appear on each stem. The tube of the individual flower is about five inches long, pale green in colour gradually fading to white at the place where the petals unfold. There are six narrow petals, hanging downwards, forming a semicircle. In the centre of the flower is a little cup-like disc from which the stamens arise. These stamens, six in number, are long narrow structures standing upright about four inches high. From the centre of the disc comes the pistil of the flower, also in an upright position, slightly taller than to stamens. The stalks of the stamen and that of the pistil are green with a blotch of yellow at the end. This yellow portion of the stamens is the pollen. With such a pleasing contrast of delicate white petals and the slender green stems of the stamens the flowers are exceedingly attractive and passes a pleasant scent. Unfortunately, the blooms have a rather short life. Pollination takes place within a few days after the flower opens and the petals, having served their purpose, begin to wither and die. There is a succession of flowers to open that the flowering period lasts from four to five weeks.

The spider lily is a bulbous plant with large whitish bulbs just below the surface of the soil. The long narrow green leaves usually grow to about twenty-four inches tall. These leaves always remain stiff and upright. (They should not be confused with the Crinum, another popular plant in Bermuda, which has much larger recurved leaves). The leaves are visible throughout the entire year but the plant never becomes really obvious until it commences to bloom. Many plants for this species may be found in areas quite close to the sea shore where there is a good pocket of soil. In such positions, the leaves are, at certain times of the year, saturated with sea spray but this does not have any detrimental effect on the plant. The leaves are protected against such treatment, because the surface is perfectly smooth and any form of liquid runs off, like water from a duck.

This lily is easily propagated by the bulb. Clumps of bulbs are lifted and divided. Each club will form a new colony of plants. It is undoubtedly by this method that the plant has spread so widely over Bermuda. Seeds are also produced in quantity, but comparatively few germinate where they fall.

The Hymenocallis is another example of an imported plant finding the conditions of growth in Bermuda ideal for its development. It is undoubtedly a good garden plant and despite the fact that it has spread, it does not appear to possess the characteristics of a pernicious weed.