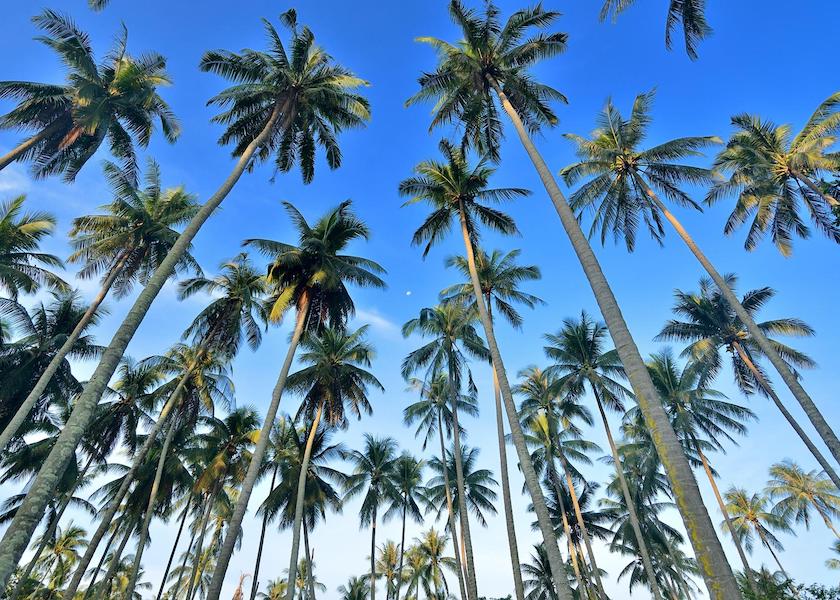 This article was taken from our archives. It first appeared in the February 1954 issue of The Bermudian. It appears here exactly as it did originally.

Among the many palms growing in Bermuda is the coconut, Cocos nucifera, which appears to have become well established in certain of the more sheltered parts of the Colony. It is probably superfluous to say that the coconut is essentially a tropical plant. In the tropics it is cultivated extensively for the production of the nut, from which copra is obtained. Anyone who has toured the West Indies or other topical areas will be familiar with the pungent odor which permeates the atmosphere near the copra mills and throughout the dockland areas of the seaports. The coconut is therefore an extremely valuable article of food both for human beings and farm animals such as cattle and pigs. To the residents of the tropical countries the coconut has another use.. From the unripened fruits is obtained a most refreshing drink. To secure this beverage the large green unripened nuts are removed from the plants and the stalk end is sliced off by means of a sharp cutlass. From as small round hole bubbles the coconut water. This liquid has a distinct flavor and is most refreshing on a hot day. The writer has, on many occasions, paused for a refreshing drink of coconut water when inspecting sugar cane plantations and rice fields in in British Guiana.

In Bermuda, the coconut is cultivated as an ornamental plant only. Although h it does produce fruit occasionally, these rarely develop properly; in most cases when the nuts are cut open there is nothing more than a mass of fibre.

As an ornamental plant the coconut has many desirable features. In recent years it has been freely planted, especially near the sea. It is worthy of mention that the coconut palm thrives only in places which are sheltered from the prevailing winds. Many people in Bermuda think that because the coconut is seen flourishing along the sea shore throughout the West Indies it should thrive in similar position here. Observations of the well-developed coconut plants in Bermuda show that in sheltered positions the palms grow into large well-developed specimens. Likewise along the edge of certain sheltered bays, good specimens may be found, but it appears to be wishful thinking to expect the coconut palm to thrive in the very exposed positions.

The coconut prefers a well-drained sandy soil and will thrive in areas which are occasionally washed with sea water. Propagation is by seed. Sprouted nuts are frequently brought from the West Indies for planting, but by experience it has been found that better growth is made by planting the unsprouted seeds in situ. It frequently happens that the young roots are broken when the seedlings are transplanted, causing a severe setback to the plant. In any case, seedling plants, although they start to grow rapidly, appear to remain stationary when the food in the seed has become exhausted and remain in that state for probably eighteen months to two years until the rooting system is properly developed.

Cocos nucifera is a native of the Cocos and Kelley Islands and probably tropical America. The palm reaches a height of between fifty and one hundred feet with a slender trunk which thickens at the base. The leaves are pinnate, from six to twenty feet long, with leaflets between two and three feet in length more or less pendulous. These large glossy green leaves possess a rather leathery texture. There is also a dwarf form now commonly planted in parts of the West Indies which only grows to about 25 feet high. A variety recognized by botanists as cocos nucifera var. aurea has yellow markings on the leaves.