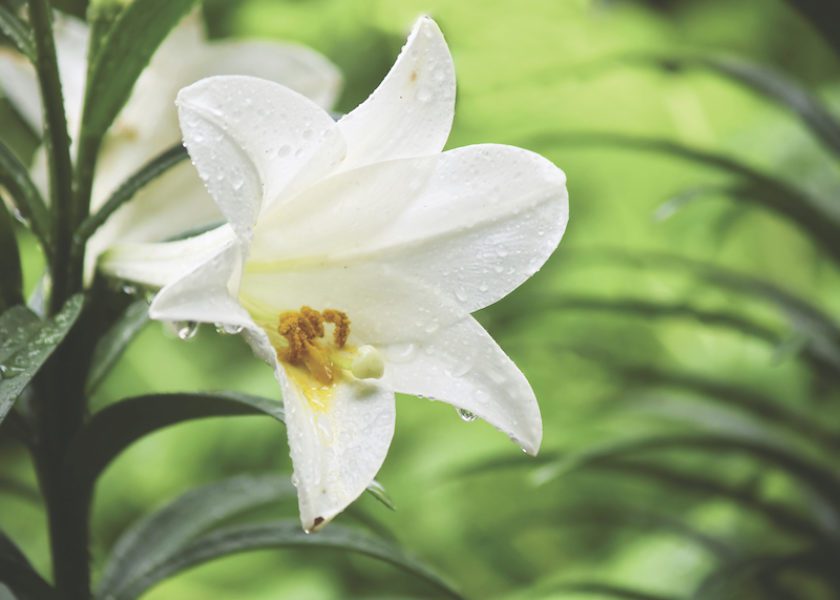 In the Garden: Spring

As the weather begins to warm up, Bermuda becomes vibrant with flowers of all types and offers continued produce from gardens. Between mid-March and mid-June, winter crops can continue to be harvested and new summer crops may be planted in the earlier part of the season. There is plenty to be enjoyed islandwide from both wild and cultivated gardens, including the famous Bermuda Easter lilies and sweet Bermuda onions.

Harvesting
For those with a cultivated vegetable garden, these crops from the winter season can be harvested:
Potatoes—planted three months prior, in January, potatoes will be ready to be dug in April and can be enjoyed at Easter.
Onions—onion seedlings are typically planted in December, and the vegetable will be ready for picking in May.
Zucchini—also planted in January, zucchini can be harvested in March and April.
Strawberries—if you are lucky enough to have cultivated strawberries, they should offer continuous produce from February through June, having been planted in October or November last year

Tip: Certain winter crops, such as lettuce, green beans, leeks, peas and carrots, can be replanted until approximately the end of March, as long as the weather stays cool enough. Each of those vegetables needs only six weeks between planting and harvesting, making them good candidates for rotation in the garden.

Planning Ahead—Summer Crops
Plant summer crops, such as cucumber, corn and various types of melon in March for harvest starting in June. Take advantage of the cooler weather while it lasts, as there is not much opportunity for planting after March.

Flowers
Spring is the time for flowers, and many types can be found in Bermuda during these months. Look out for snapdragons, larkspur and Easter lilies, among others. And depending on the year, wild freesias may still be in bloom until the end of March.

Easter Lilies: These beautiful, fragrant flowers will be in bloom islandwide in either March or April, depending on the timing of Easter Sunday. The bulbs are planted as early as September the year before. This year, expect to see them mostly in April, as the holiday falls on April 21.

Seasonal Threats
During the months of April and May, there are various insects and bugs, such as slugs, caterpillars and whiteflies that pose a risk to crops and flowers. One natural method of deterring pests is maintaining marigolds throughout the garden. The distinctive smell of these brightly coloured blooms naturally keeps bugs at bay. In order for the flowers to be most effective, distribute them in small groups throughout the garden.

Bluebirds
A true harbinger of spring, these beautiful creatures are indigenous to Bermuda and can be easily identified by their richly coloured plumage and sweet song.

Help the species to survive by inviting them into your garden. The bluebird’s nesting season runs from March through July, and can be encouraged by the presence of mounted bluebird boxes. To set up a box in your garden, choose a spot in an open, grassy area, but near a tree, wire fence or other place where bluebirds can perch to look for food and watch the nest. Bluebirds may nest up to three times in a season, so be sure to monitor your nest-box to check for predators and clear out old nests once the chicks have fledged.

Threats to bluebirds include rats, lizards, cats, kiskadees, starlings and sparrows. Of these, the sparrows and rats are perhaps the most dangerous. Sparrows, which can fit through the hole of the bluebird box, often oust the bluebirds and kill any chicks they find inside. Alternatively, rats and lizards pose a threat by eating the bluebirds’ eggs.