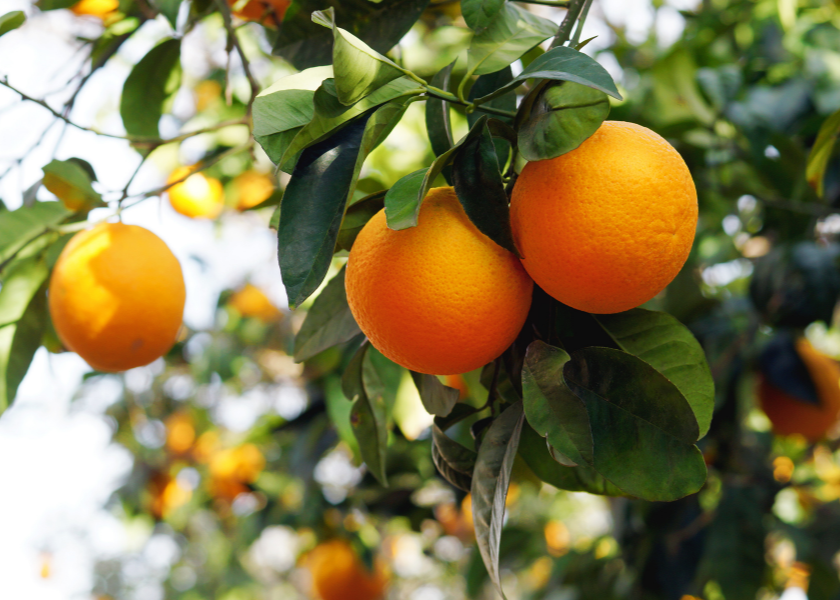 In the Garden: Winter

Lack of frost and freezing temperatures allow us in Bermuda’s winters to both harvest and continue to grow flowers and produce. Typically, citrus ripens around Christmas time, just in time for making holiday gifts with your children.

Carrots
There’s nothing more delicious than Bermuda-grown carrots, which is fortunate since they are on permanent embargo. Of course, we grow them in the fall so barring hurricane damage or lack of rain we can harvest them in time for Christmas. But they can be successively grown every two weeks throughout winter and spring.

Growing Carrots
Prepare the soil, clearing it of rocks and clumps.

Sprinkle tiny seeds directly into the soil in rows and cover with ¼ inch of soil.

Growing seedlings too close together causes split or deformed carrots. When the seedlings are 1 to 2 inches tall, thin them out so there are 2 inches between them. Do this by snipping the seedlings at the soil line or pulling them out.

Fertilise two weeks after the carrot tops emerge if your soil is not rich.

Harvest between 50 and 70 days after planting.

Tips:
Plant radish seeds with carrot seeds. Because radish seedlings grow faster and are bigger, you’ll be able to locate the carrot seedlings more easily. Also, the radishes will loosen the soil.

If some weeks after thinning, the carrots are still too close together, thin again using the young carrots in relishes or salads.

Note: Mature growing carrots should not be rubbing shoulders.

Did you know?
Carrots were planted in Bermuda in 1610 and have been grown ever since.

Oranges
Because oranges ripen in Bermudian citrus orchards December through February, they have traditionally been included in Christmas greenery arrangements. The fragrance of their peel adds to the holiday ambiance. Christingles and pomanders are two fun decorations for children to make.

Did you know?
In 1747, the Moravian Church in Germany began giving the congregation lighted candles with red ruffs around them at Christmas time. Today, a Christingle consists of a candle and skewered candies and/or dried fruit placed in a whole orange decorated with a red ribbon. Some churches in Bermuda hold Christingle services over the Christmas season. Usually they are held at night, so that the lit candles look more festive.

Christian Symbolism
The orange symbolises the world. The candle symbolises Jesus Christ as Light of the World. The red ribbon symbolises Christ’s blood and sacrifice. The cocktail sticks symbolise the four seasons and the four corners of the world. The sweets remind Christians of God’s gifts, including kindness and love.

Making a Christingle
You will need:

Enough red ribbon to tie round an orange with a bow

Small piece of foil measuring about 4cm by 4cm

Pencil to make a hole in the orange

Instructions
Carefully push the pencil into the top of the orange to make a small hole.

Skewer about three sweets or dried fruit onto each of the cocktail sticks.

Push the cocktail sticks into the orange in four different directions slightly above the fattest part of the orange and pointing slightly upwards.

Take the foil and wrap it around the candle at the bottom before firmly wedging the candle into the hole that you made in the orange. Keeping the candle straight, mould the foil to form a shallow cup shape to catch any drips of candle wax.

Tie the ribbon round the orange and fasten with a bow.

Note: An adult should always be present with children holding lit candles.

Tip: Glow sticks can be used instead of candles.

Pomander
Since medieval times, pomanders have been used to keep indoor spaces and closets clean and sweet smelling. At Christmas time, orange pomanders emit an aromatic fragrance. If they dry out properly, they can last for months.

Making a Pomander
You will need:

Instructions
Wrap the ribbon round the orange as you would a parcel and tie with a bow. Use the toothpick to make a hole in the orange and then push a clove into it. Continue until all the sections are covered with cloves. Display several pomanders in a bowl or hang them in your closets.

Flowers
If you haven’t already planted annuals for borders, hanging baskets and containers, now’s the perfect time to start. Flowers such as violas, pansies, impatiens, snapdragons and geraniums are easy to grow through the winter and spring. See calendar below.

Did you know?
Impatiens is Latin for “impatient,” a suitable name for these popular flowers because their pods explode, jettisoning their seeds up to several yards away.

Cinnamon Spice
All sorts of spices certainly come into their own during the festive season, being used for eggnogs, mulled wines, cakes, puddings and pies. But did you know cinnamon is an effective garden aid without being harmful to children or pets? It acts as a fungicide, an insect repellent, a healing remedy and a propagating aid.

Why You Should Use Ground Cinnamon in the Garden
Ants can’t breathe when inhaling cinnamon, so they avoid it. Food they normally like no longer attracts them because the spicy scent prevents them from smelling it. Sprinkle cinnamon powder on ant trails and they will disappear. Mosquitos hate the smell of cinnamon. Sprinkle powder on plants and they will leave.

Cinnamon acts as a medicine for sick plants. Sprinkle powder on leaves with holes and they will heal. Cinnamon prevents unwanted mushroom or other fungi. Apply as an antifungal agent on wounds or cuts in stems caused by over pruning. If fungi do appear, sprinkle powder on the affected areas to kill them.

Cinnamon acts as a fertiliser. Use it around the base of a plant once a week.

Cinnamon acts a rooting hormone for cuttings. Dampen the ends and roll them in a teaspoon of powder. This will promote more growth and prevent damping-off disease caused by fungi.

Did you know?
Cinnamon is a rooting agent especially effective for rose cuttings.

Tip: Make a cinnamon spray for controlling fungi and disease:

Mix 4 tablespoons of cinnamon powder to 8 cups of water. Shake mixture vigorously and steep overnight. Strain the liquid through a sieve or coffee filter.

Put the remaining liquid into a spray bottle. Spray the stems and foliage of any affected plants.