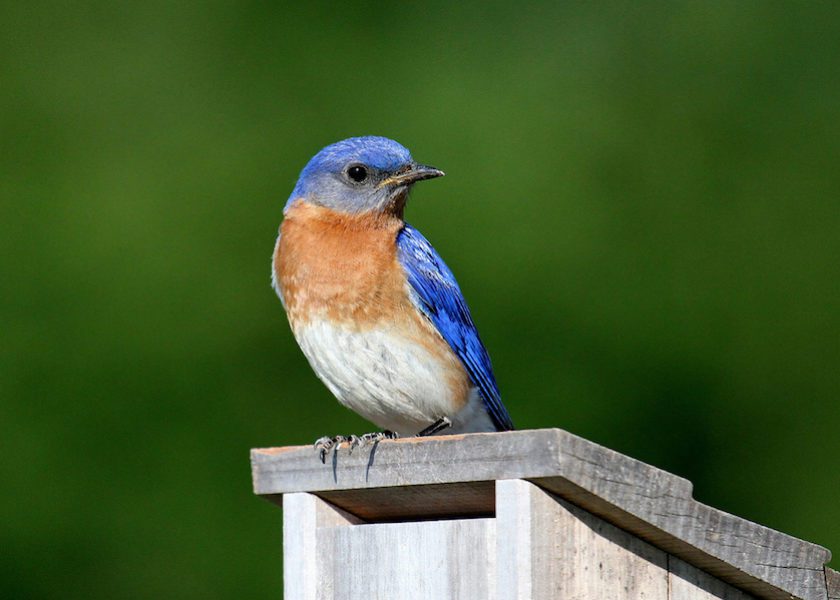 Make Your Own Bluebird Box

Bermuda bluebirds have become almost completely dependent on man-made bluebird boxes to survive. There is some evidence to suggest that the birds seek out wooden nest boxes over natural sites, and with good reason: the plucky bluebird is often evicted from their nest by larger birds.

The Eastern Bluebird, which has been native to Bermuda since the 1600s, is threatened by habitat loss, and forced competition with non-native, invasive species. The house sparrow, starling, and kiskadee, which were all introduced to Bermuda and have since monopolized many biological niches, will kill bluebird chicks and adults to purloin their nesting sites.

In addition, man’s interference has also hindered the bluebird in other areas. Efforts to feed feral cats have increased their numbers, making bluebirds more susceptible to cat attack. The use of pesticides can also harm bluebirds that eat contaminated insects.

Bluebird breeding season is from March to July, and dedicated bluebird box owners can get up to three nestings per season. Bluebirds lay 3-5 eggs depending on environmental conditions, with optimal conditions occurring in the middle of the season.

Eggs hatch in about two weeks, and chicks fledge in a further fifteen to twenty days. Bluebirds’ alliance with humans offers you and your family the unique opportunity to watch the life cycle of these birds up close.

Bluebird boxes are vital for bluebird survival because they have an entrance hole cut only small enough for the bluebird to fit through, removing the threat of the larger kiskadees and starlings. However, house sparrows can still get in and threaten the bluebirds, so the box should be monitored to ensure that house sparrows are not nesting inside.

All bluebird boxes have a door that can be opened on one side, granting overseers the opportunity to look in on the chicks and observe their growth. This also lets you clear out the old bluebird nests once the chicks have fledged.

Things to bear in mind when setting up your box include:

Bluebird boxes and kits can be purchased from Aberfeldy Nurseries and the BAMZ gift shop. All proceeds go to the Bermuda Audubon Society. You can also download instructions for making your own box here.