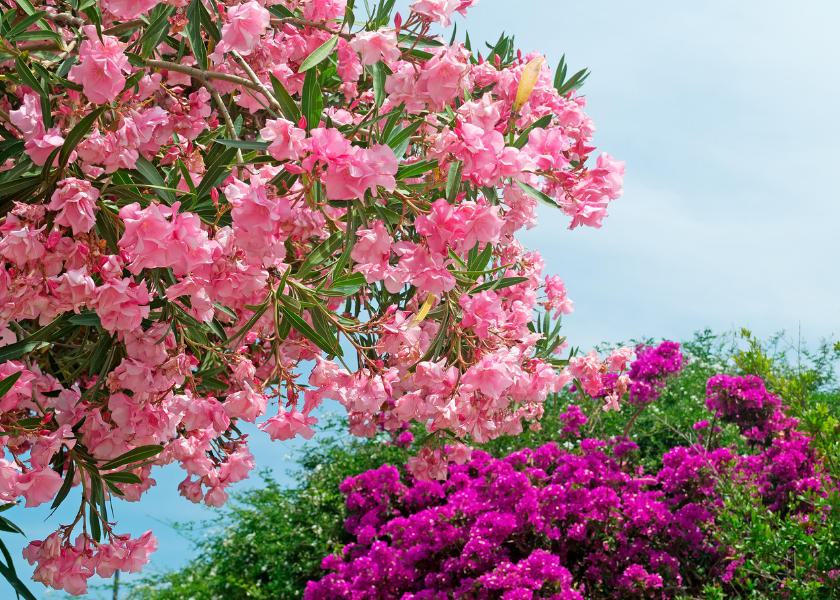 Spring In The Garden

Well, the freesias are out, the longtails are back, sure signals spring is here. Of course, unlike gardeners in more northern climes, we’re not beginning our growing season after months of snow. Our growing calendar began in the fall so already we have vegetables, flowers, and herbs ready for harvesting. However, spring does mean for us, at least by the end of March, fewer storms. Sunny but cooler weather allows our gardens to flourish, peaking in May. We continue to grow vegetables and herbs such as thyme, essential for our Good Friday fish cakes, rosemary, parsley, basil, mint, sage and lemon balm, fennel, and dill. But we also think about what we’ll need to eat in the hottest months ahead when water needs to be conserved.

Ornamental Plants Requiring Less Water
We love our annuals and perennials giving colour to our gardens, patios and window boxes during the spring. However, they do consume a lot of water so now is the time to anticipate the driest months of the year. In addition to the plants in the planting guide below, why not plant the following easy-on-water plants either straight into the ground or into containers:

Grow Your Own Salsa Garden

Salads are standard fare during the summer, but the leafy kind can feel bland after a while. Salsa, on the other hand, has zest and zip and is all the tastier when made from freshly picked ingredients from the garden. Consisting of chopped or pureed vegetables and herbs, it can be served as a dip with tortilla chips but is also excellent with codfish cakes. So why not grow a salsa garden in time for Good Friday? You can set aside a plot in your garden or use containers, which have the advantage of being easily moved into the shade when the sun becomes too fierce. Ingredients vary according to taste, but most salsas contain tomatoes, peppers, onions, parsley, and garlic. Freshly squeezed lime juice is often added.

Tomatoes
Tomatoes are usually the heart of a salsa. Plant nurseries in Bermuda offer a good variety. Roma tomatoes are flavourful as are cherry tomatoes which grow well in a pot. Three plants should produce enough fruit to last the summer.

Hot Peppers
If you like medium-to-hot salsa, grow cayenne peppers. Jalapeno and tabasco peppers are excellent for a mild-to-medium heat level. Hot peppers are easy to grow in Bermuda and each plant can produce over a dozen fruits. Grow three to five pepper seedlings, one per pot.

Sweet Peppers (Capsicum annuum)
Use only sweet peppers if you do not like spicy hot food or a mix for a sweet and spicy blend. Red, yellow and orange peppers take longer to ripen. Peppers at their green stage can be harvested earlier.

Onions
Bermuda onions work well, as do red onions. Scallions and/or chives can be substituted. They add a milder taste while giving colour.

Parsley
The true salsa calls for cilantro, otherwise known as Chinese parsley or coriander. The leaves have a peppery taste while the seeds, ground, are aromatic and can also be added to the mix. But curled parsley is a good substitute for those who like a milder taste. It is also easier to keep going during the summer. All can be grown in pots.

A Fairly Spicy Salsa Recipe
Either puree or mix together: