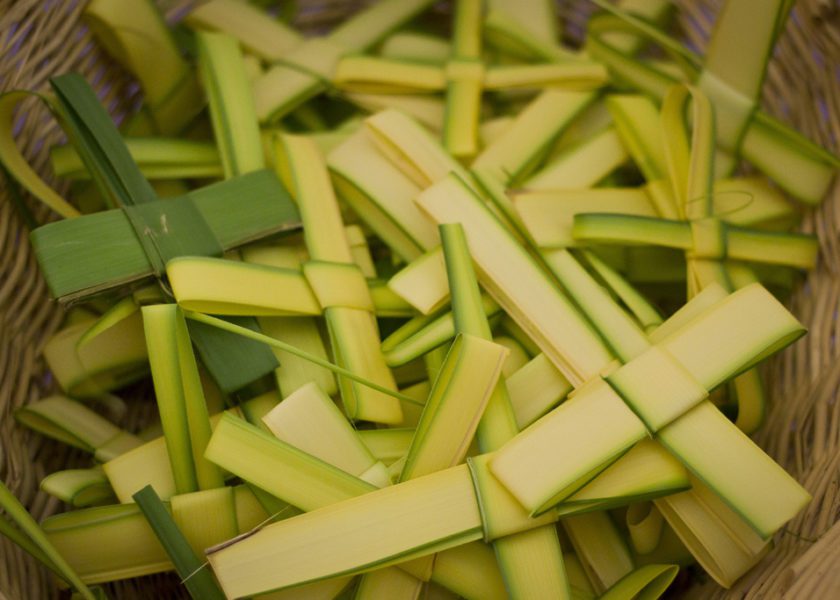 A Calling at the Heart of the Humble Palm

Thousands of palm crosses are crafted each year for local Christian churches on Palm Sunday. But do you know where they come from?

Every Palm Sunday, Christian congregations all over the world receive palm-leaf crosses, symbols of Christ’s triumphant entry into Jerusalem and his subsequent crucifixion. The tradition is, of course, followed in Bermudas but with a special twist. At least 40 of our churches distribute to their congregations crosses made right here on the island. Crafted out of our own Bermuda palmetto, these charming crosses are created by clients at the Mid-Atlantic Wellness Institute as part of their vocational rehabilitation programme. Chitra Singh, coordinator of vocational rehabilitation at the hospital, explains that the skills and steps involved in making the crosses are therapeutically valuable because they can be transferred to employment situations in the community.

And so starting in November, clients visit the vocational rehabilitation area of the hospital every weekday so they can together make sufficient crosses to meet demand. In fact, their fame is crossing the Pond, as some American churches order Bermudian crosses for their Palm Sunday celebrations.

A production line is formed, with each person taking responsibility for one particular step. First, leaves are stripped from palmetto fronds and then split and flattened. Every cross consists of two strips, one long, one shorter, so strips have to be cut to the prescribed length. Their edges are trimmed and then the tricky business of plaiting, knotting and looping begins. “Making the crosses allows the opportunity for fine motor coordination and for skills of concentrations,” Singh says. “It’ all labour intensive.” Of course, part of the charm of the crosses is that no two are exactly alike, although one person is in charge of quality control to make sure the crosses are suitably straight and symmetrical. If they’re not, then they’re reworked.

In fact, the project was the brainchild of Angela Mucklow, who introduced it when she was manager of the Sheltered workshop (now the Opportunity Workshop) during the early 1970s and then took it to the then St. Brendan’s Hospital when she returned as coordinator of vocational rehabilitation in 1973.

“Previously, the palmetto crosses were mostly made by the church guilds or perhaps imported from Africa,” she says. “But because more women were working, the guilds decreased and so did the locally made crosses. Someone suggested we do it. We would take the central leaf before it opened – this never stopped the tree from growing healthily – and dry it. Chinese palm leaves don’t work because they dry like seersucker.”

Since Hurricane Fabian, this method has changed because of a shortage of palmetto trees. “The other leaves on the tree work just as well,” explains Singh. The only difference is that they dry to a silver green rather than to the white of the palm’s heart.

Once the New Year begins, the work intensifies to make the target figure of 8,000. As mental welfare officer Winston Rogers points out, “For years I’ve seen these guys making these crosses, but when people receive them on Palm Sunday, often they don’t know who has made them. Sometimes the crosses end up on the floor.”

Which is a shame. For one thing, they make very attractive Bible bookmarks. But more importantly, behind each cross is a human story.