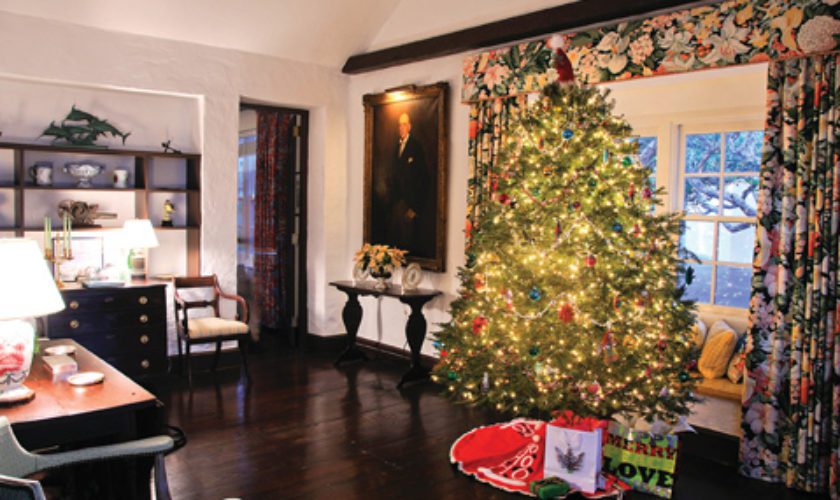 Rich in history and Bermuda charm, Bellevue Beach Cottage is bedecked for the holidays.

Welcome to Bellevue Beach House, built in the 1920s and purchased by the Anderson family in 1932. The Andersons, from Grosse Point, Michigan, had ties to the nascent automobile industry. These were the early days of American investment in Bermuda, which also marked the beginning of our very successful tourism industry. Many grand Bermuda houses became guesthouses and hotels to support the rapid growth of tourism, but Bellevue Beach House has remained in the Anderson family for the past 80 years.

Before cars, Wi-Fi and reggae, at Christmastime Bermudians listened to the clip clop of an arriving horse-drawn carriage or the sound of surf on the South Shore. Bellevue Beach House evokes that feeling of yesterday with its entrance shaded by a huge Indian laurel tree. Anderson family lore maintains that Irving Berlin penned “White Christmas” while lounging under the iconic bay grape that shades the terrace overlooking the South Shore. Indeed, the Bellevue guest book is a veritable who’s who of dignitaries, royalty and well-known friends of the family, including President Richard Nixon and Princess Grace of Monaco.

Decorated by the present owner for Christmas, Bellevue Beach House is a snapshot of the past. Liberal use of poinsettias, dried palmetto twigs, local pepper berries and wreaths made of cedar take us back to the days when flower arranging consisted of clipping roadside greenery and cadging from friends’ gardens.

The entrance-hall floor displays an unusual combination of cedar discs and cement. In the living room, the antique carved fireplace surround is Welsh and showcases vintage souvenir straw dolls. The sugared-candy garland has been in the family for many years. Tea trays were meticulously set to welcome visitors during the festive season. Portuguese sweet bread with dried fruit was another seasonal tradition. Particularly charming are the embroidered vintage linen napkins, depicting Bermuda parishes in soft pastels. A portrait by Halmi of the owner’s grandmother hangs above the sofa. Halmi was a well-known society portraitist during the 1920s and 1930s. Christmas cactuses sit in full bloom on the shell sconces. On the coffee table is an antique candy jar filled with old German glass ornaments.

At the other end of the living room is a Welsh dresser decorated with poinsettias in an old wine cooler. The Welsh dresser was likely purchased along with the fireplace surrounds in England after World War I, as wealthy Americans traveled to England to collect furniture from country houses being dismantled by families who could no longer afford their upkeep. The glass Christmas plates were decoupaged by the present owner, and the lovely crystal bowl decorated with chandelier crystals was the artistic inspiration of Bob Russell, a sculptor and artist in New York. The Christmas tree almost, but not quite, blocks the view of the gigantic bay grape on the terrace. It stands tall next to a portrait of John Wendell Anderson, the owner’s great-grandfather.

The dining room features French doors overlooking dramatic Grape Bay beach. Above the fireplace is a beautiful oil of the former Bellevue coachman, Joe Bean, driving the landau with a matched pair. The horses were called Mint and Brandy, as the owner’s grandfather, pictured in the portrait, named all his animals after drinks.

The display table holds memorabilia from Wendell William Anderson’s stay in Paris after World War II when he served as defense minister to NATO. There are also souvenirs from his service during the Eisenhower administration.

The dining room contains a portrait of the owner’s father and uncle, Wendell and Jack Anderson respectively, painted by the artist Emile Antoine Verpilleux (1888–1964) who, despite his French name, was actually British and lived and painted in Bermuda for many years. There are four Verpilleux works at Bellevue, and the owner knows of several other Bermudian families who commissioned his work. Also of note are the vintage glass light-up Santas on the table, which is set with Royal Worcester Holly Ribbon china and matching linens.

There is a beautifully proportioned fireplace in every room. In a bedroom, one of four, there are paintings of feathers and a modern interpretation of hibiscus and bay grapes. There are tray ceilings and sitting areas, further creating an air of elegance in each room. Bellevue Beach House reflects Bermudian vernacular architecture yet complements rather than competes with the main house, Bellevue, which was the first structure on the estate, sitting atop the hill.

Bellevue Beach House recalls memories of a simpler time, when Thursday afternoons were for cricket, sailing or football, sherry-pepper recipes were deep, dark family secrets and loquats were eaten right from the tree. Christmas was a time for entertaining and enjoying the bounties of the season. Today that warmth and good cheer still exists in the elegant rooms of Bellevue Beach House. It projects the gracious posture of the grand dame that it is, holding court over its South Shore domain.