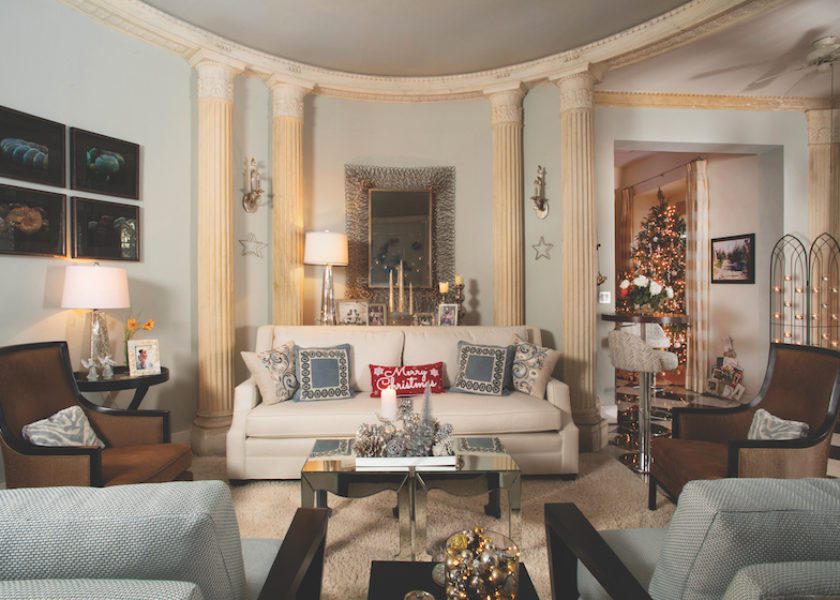 All that Glitters: Kim Hughes’ Art Deco Home at Christmas

Some houses are perfect for Christmas decorations and Kimberly Hughes’s condominium at Deepdene is one of them. It’s not that she transforms her home into a Christmas extravaganza of red and green and glitter. Other than a few pops of red, she mostly chooses neutral tones of silver, gold and white for the ornaments placed throughout the house and on her Christmas tree. For example, one angel crafted out of twigs and sprayed with silver stands by a door. Silver, tree-shaped ornaments stand on a dresser, together with glass angels sparkling in the light.

Silver baubles hang from the ceiling; gold, white and silver candles are everywhere. 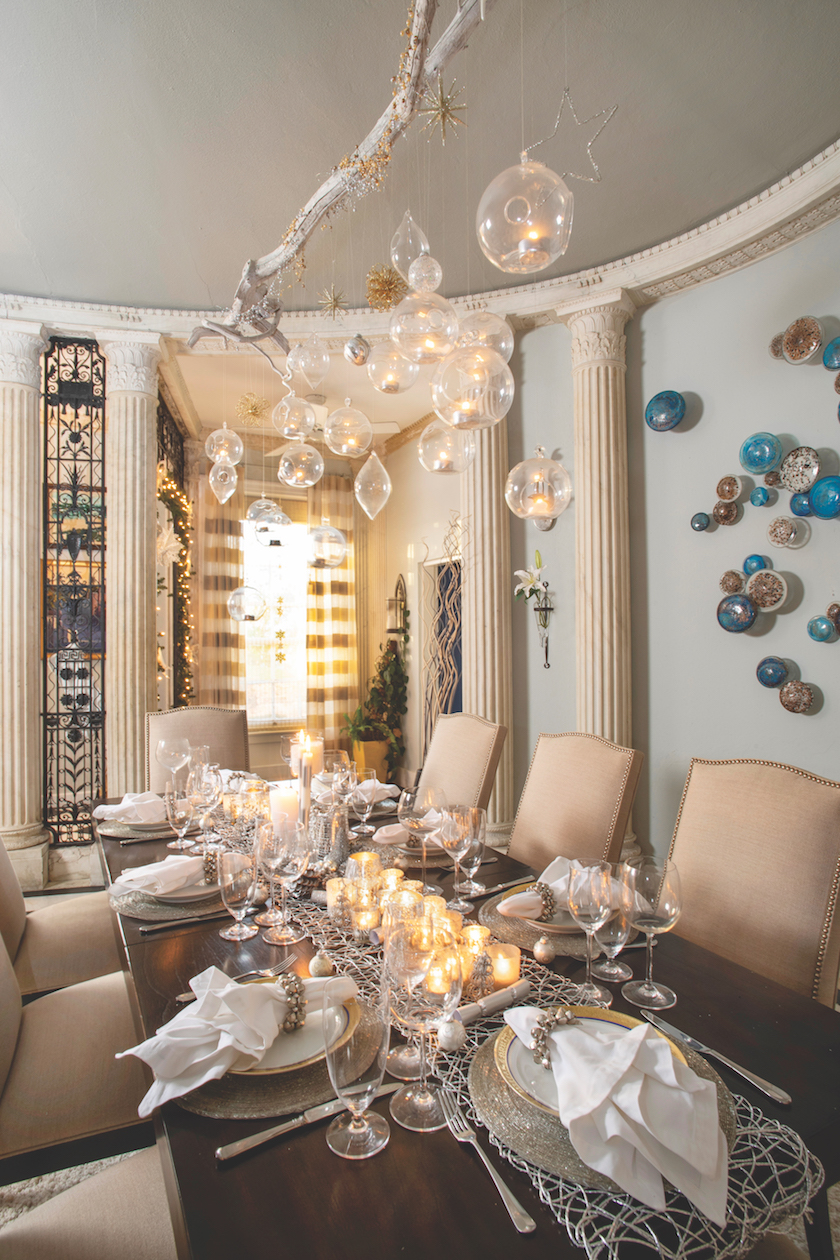 These colours enhance the natural glamour of Hughes’s home where she has lived for the past ten years with her husband and two grown daughters. The condo is part of what was once a luxurious mansion, the winter home of American Wall Street investment banker Clinton Ledyard Blair and his first wife, Florence Jennings Blair. Their property was built in 1929 on ten acres of land, which Blair bought from the Church of England in 1926. It cost $500,000, a huge amount of money in those days. Designed by Frederick P. Hill of Hill and Davis, architects based in Bermuda, it also incorporated interior fixtures from the Blairs’ New York home, designed by Carrere and Hastings, architects of the New York Public Library and the Frick Museum. (Thomas Hastings would go on to design the Harrington Sound Boathouse with its distinctive tower.) In 1947 the property was sold to Dorothy Vera Hunter of Harrington House who turned it into a “most luxurious guest house” and renamed it, Deepdene Manor. The Hughes’s condo includes the main entrance to the hotel which they now appropriately dub “the oval room” and which incorporates both their dining and living rooms. It features elegant, white Italian marble columns taken from the Blairs’ New York house, testimony to the Beaux-Arts classical style of their architects. Hughes, herself a professional interior decorator and owner of Designs for Living, has emphasised the look by continuing the hallway’s black and white marble floors. Year-round, attractive wrought iron trellises, again from the New York house, frame the interior giving an Art Deco feel. At Christmastime, Hughes gives them a more festive look by dressing them with greenery pinned with white butterfly ornaments and threaded with fairy lights. A leafy wreath over one of the entrances follows the theme with its white and silver decorations, while a matching metal screen holds votive candles. 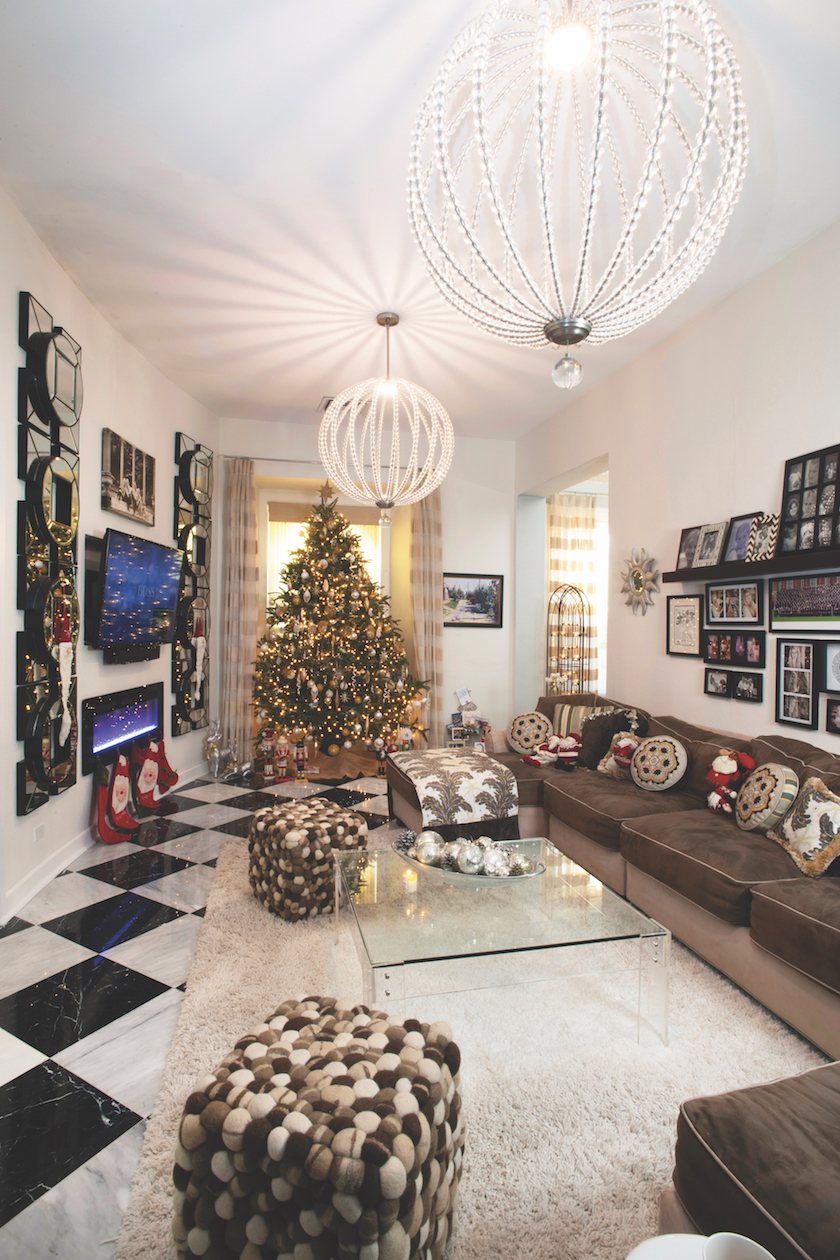 Indeed, light plays an important part in the interior design all year. A chandelier in the entrance recalls the opulence of the Blair mansion and two additional ones in the family room mirror light onto the ceiling at night. Multiple mirrors, strategically positioned on walls throughout the house, also reflect the light as well as the decorations during the festive season. Like the trellis-work, they add an Art Deco touch. Over the dining room hangs a handmade chandelier recalling the pre-electricity era of candlelight. “There’s no power point there,” Hughes explains, “so I have hung a piece of driftwood from the ceiling and hung glass globes from the driftwood in which I put votives for light when I entertain. I found the driftwood at Cooper’s Island.” The effect is beautiful and especially fitting at Christmas when she also hangs silver and gold ornaments from the driftwood. Her table gleams because of her use of gold, white, and silver—silver woven mats, silver bell napkin rings around white napkins—and because of the multiple candles on a silver runner casting golden light and creating her centrepiece. 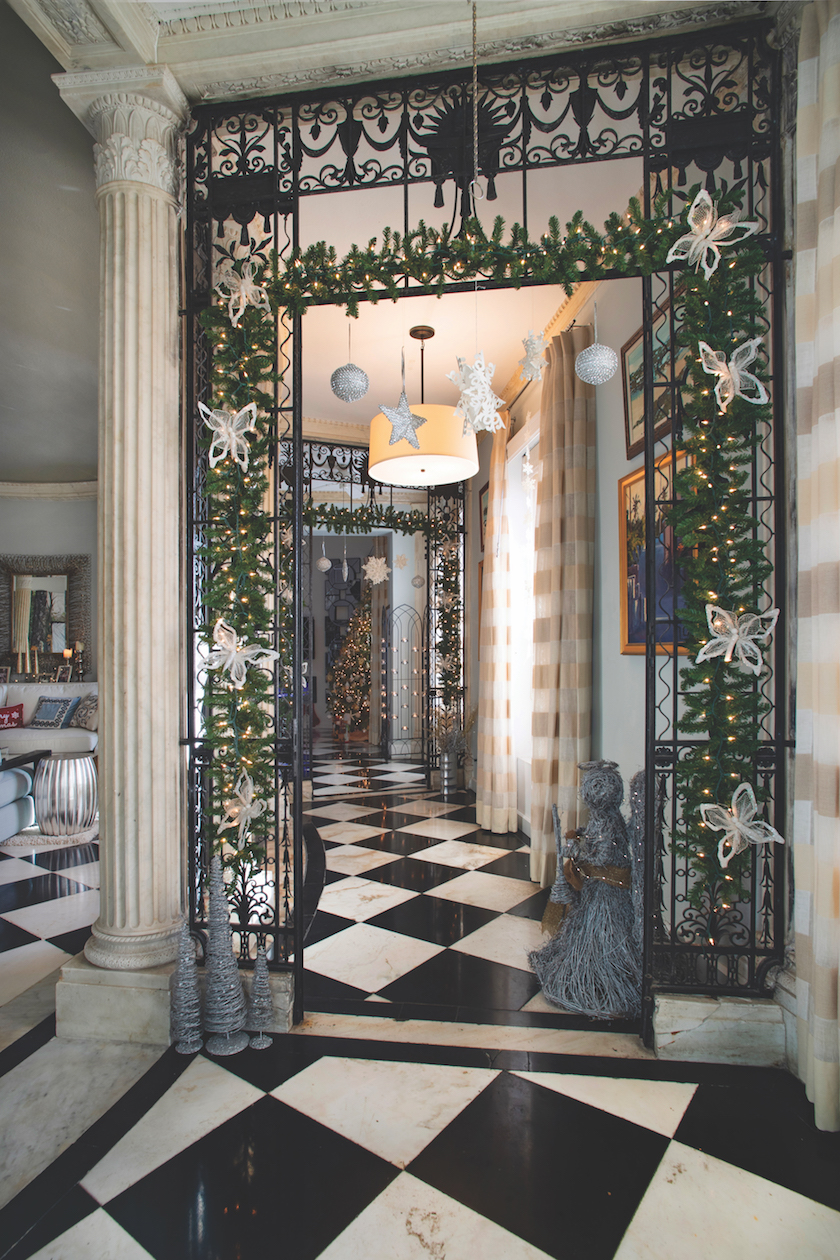 Her Rosenthal Helena tableware was actually her parents’ wedding china. White with blue and gold rims, it fits perfectly with her Christmas colour scheme although she also uses it on other special occasions. 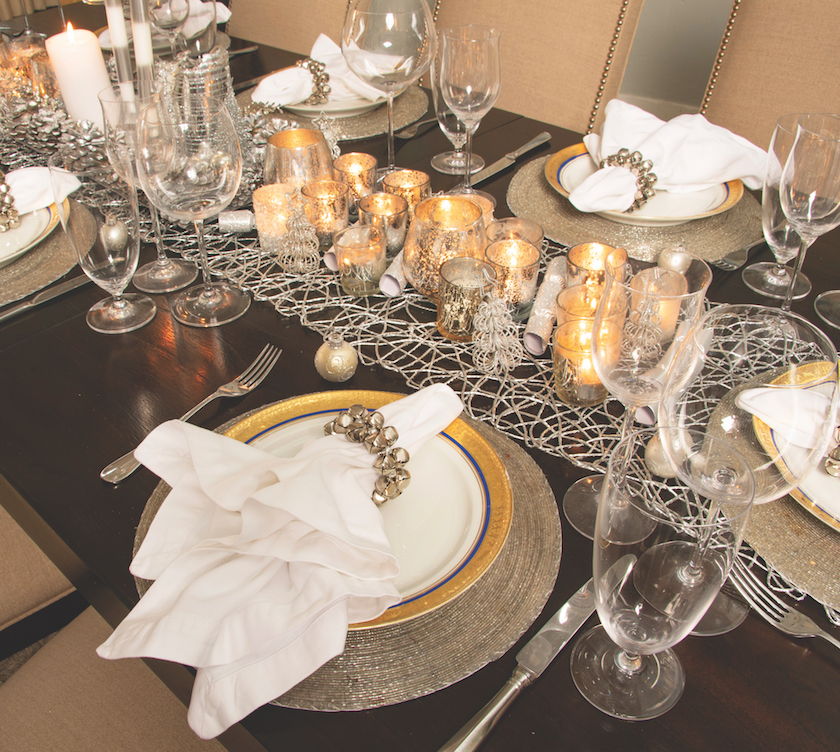 It’s no surprise when she says, “I have always loved Christmas and usually decorate early in December to have a full month of enjoying the decorations.” With his attention to aesthetic detail, Charles Ledyard Blair would surely have approved of her style.