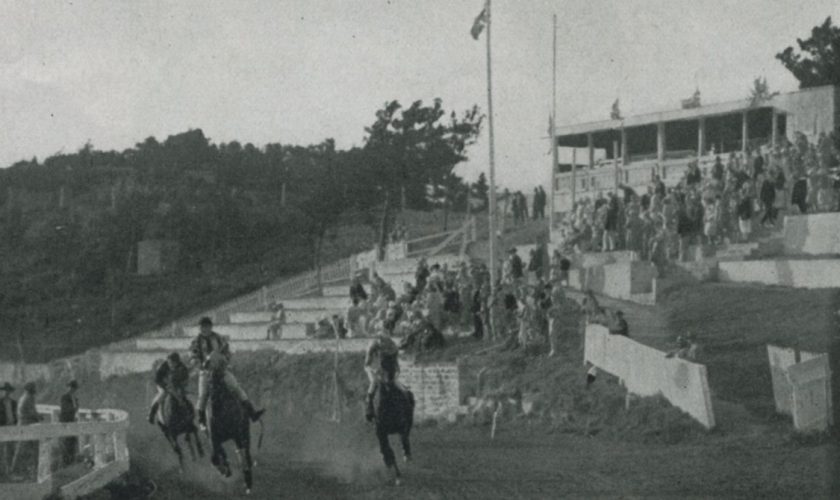 Home for the Holidays: Boxing Day, Its Significance and Diversions

The early colonists brought the custom of the Boxing Day holiday from England, where it originated long enough ago to baffle antiquarians as to its exact date or derivation.

It is scarcely mentioned in the early records of the Colony except as one of the three days allowed the slaves at Christmas. Although it was probably observed, being merely a secular holiday, it was considered an event of little moment, for it must be remembered that both Church and State still frowned puritanically at revelry of any description.

There were, of course, restless spirits, such as privateersmen, who treated any authority but their own very lightly, and spent much of their shore leave carousing in the rum shops of St. George’s and in other ungodly practices, in defiance of popular sentiment. But the representative class of Bermudians, two of three hundred years ago, were the planters whose life was a placid, unhurried existence, and by whom a holiday that was not a religious festival would of necessity be spent in very homely enjoyments.

Unfortunately we can only conjecture what Boxing Day meant to those Bermudians who secretly sympathized with George Washington; but in the memories of men still living we have an authentic record of the celebrations that distinguished it when Bermuda was madly backing another American rebel, Robert E. Lee.

The century which had intervened saw only nominal change in local manners and customs. There was still no Colony-wide event scheduled for Boxing Day, and community activities such, for example, as those of Baileys Bay, would not appear to have altered at all.

Horse racing was the Boxing Day sport in Baileys Bay. Everyone in the vicinity who owned a horse—whether its ordinary occupation was on the farm, in the buggy or under saddle—took part and met at Cripplegate Corner where the public road winds along the shore of Harrington Sound. Here the riders paired off their mounts, matching them as well as they were able, into as many two-horse raves as their number would permit. There was none of the usual paraphernalia. A self-appointed starter lined up each pair and dropped a handkerchief which sent them off along the sandy straight-away called Wilkinson Avenue. The winning post was a big pride-of-India tree in front of Mr. Stephen Wilkinson’s grocery store, near the corner where the perfume factory now stands.

There were no purses and consequently no need of judges. The man who got to the pride-of-India tree first received as his only reward the congratulations of his neighbours who crowded every vantage point on either side of the course.

The racing occupied most of the morning and part of the afternoon. In the evening a ball was usually given as one of the old homesteads, whose front rooms are characteristically spacious, as if designed for dancing. These affairs were somewhat formal, and society for miles around mingled and sedately in quadrilles, waltzes, mazurkas and polkas, and evidently enjoyed it. By the time a Sir Roger de Coverley, reserves as the last dance, was announced, the candles had commenced to gutter in their silver candlesticks, and even the musicians, recruited usually from a Gombey band, had begun to flag. The stamina required by the musicians for such an evening is evident from a saucer-like depression in the drawing-room floor of Walsingham, pounded there one Boxing night by the heel of a popular and vigorous orchestra leader of sixty years ago.

Modernism swept away these rustic fashions; dancing was adjourned to hotel ballrooms, and Wilkinson Avenue and its unwritten code replaced by Jockey Club Rules and Shelly Bay. The Bermuda Hunt Club staged the first organized races there in 1876, but, for the next thirty years, the Colonial racing season consisted solely of a Derby Day meeting in March and even this was abandoned in 1905.

Three years later the club was reorganized, and at the same time it was decided that several meetings could be arranged during the winter season. The first of these was scheduled for Boxing Day 1908, and proved a great success. Year by year the popularity and thus spending this holiday increased, until in point of attendance and public interest it far outshone every other sporting event of the season.

In those days racing was still an amateur sport in Bermuda. It had the support of British Army officers, who not only entered their horses, but usually rode them as well; and we had a number of clever horsemen ourselves. Weeks before Christmas local gossip was filled with conflicting opinions of this or that horse or rider. Discussion wrought enthusiasm, and on “race day” a throng with their minds made up drove, rode bicycles, or walked to Shelly Bay. But even the few with no particular horse to back were on the way there, for at the Boxing Day races one met friends from Somerset and St. George’s.

On one side of the grandstand was the regimental band—a neat square of red coats and pipe-clayed strappings. Along about eleven o’clock the blare of a military march gave promise that the first race was about to begin. Glimpses, through the trees in the paddock, of plunging horses, exited jockeys and harassed stable boys, further confirmed this, and sent the last minute bettors flocking to the pari-mutuels. When the jockeys were about the mount the bandmasters usually switched from the march to a waltz, which was considered more suitable for the parade to the post, the momentary confusion of the start and the quick drumming of hooves as the horses broke away. Then the music always faded, either because no one listened anymore, or probably, being English soldiers, because the bandsmen had become too excited to play.

It was generally after the first rave that the hubbub of voices was subdued by the National Anthem which signalized the arrival of His Excellency the Governor. His big, open carriage, with a liveried coachman on the box driving a well groomed pair of horses, used to come smartly down the course past the crowded hillside and along beneath the grandstand to its entrance at the farther end, where His Excellency would alight. Men took off their hats and made way for him to walk up to the wooden stand roped off with red and yellow bunting, reserved for him and his party. Although this was never planned as an imitation of His Majesty’s arrival for a Royal Ascot, and certainly no one ever thought of it as such, it was the closest that Bermuda ever got to that stately procession.

Professionalism cam immediately after the War, with the general importation of thoroughbred racehorses. They made for an even more brilliant spectacle, but one which was, unfortunately, too expensive. There is talk of another reorganization and a return to amateur statue. Something should be done, for after all, it is a pity that such good sport should languish, and that Boxing Day, instead of being a racing holiday, should become rather a blank date on the calendar.