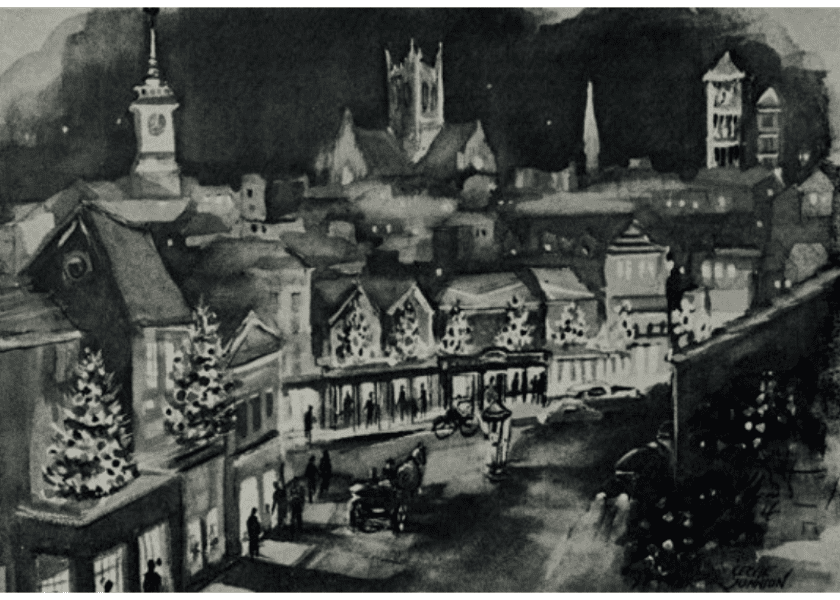 As you and my son near your first married Christmas, I thought I’d drop you a line on the subject of traditional holiday cooking as you may well begin to hear some murmurings about him missing his “pie”.

“Pie” is cassava pie without which no Bermudian Christmas is complete. It has a unique, impossible-to-describe flavor that almost everyone who isn’t Bermudian absolutely hates. Cassava pie must be eaten along with the ham and turkey and mashed potatoes and beans and carrots and everything else that goes to make up Christmas dinner. It is utterly superfluous and absolutely necessary!

The making of the pie is one of the whited- sepulcher-type things that you let your mother or grandmother or maiden aunt make until they have one foot in the grave and you are forced into it. The only person I know to take the bull by the horns before she had to do it is That Woman Called Intrepid, Mrs. Stephen West, who came to terms with cassava as a new bride (American at that!). I include her recipe, which is simple and terrific.

I’m going to tell you how the old-timers made “pie”:

First, you catch the chicken. Now you will have eyed up that fowl (although some people insisted on a rooster) for a while and decided out of all the birds in the backyard that it possessed the most “pie potential”. After catching it you then provide it with private accommodation in a box or packing case, and proceed to fatten it up with all kinds of tender loving care and extra tidbits, and bran mix with regular chicken feed. This is the opposite of the free-range technique in vogue today, but it makes for a real succulent bird.

My authority on old-time cassava pie-making, Mrs. Clara Lambert, says that her rooster was incarcerated there for about six weeks until Christmas Eve. On that night, not only was one awakened by Saint Nick’s sleigh bells, but also by the squawking of the neighbourhood chickens as, one by one, they met their demise.

Mrs. Lambert’s mother stayed up all night cooking on Christmas Eve, and had to finish off the bird herself, as her husband was too “chicken” to do it! However, it was he, who had dug the cassava root from the garden a day or so before. Then, one never used cassava until it was two years old. But Mrs. Harry (Jessica) Cox today digs “first year cassava” as she considers it to be more tender. Care must be taken in the digging, as the roots are quite brittle, and Mrs. Lambert remembers her father going gingerly with the spade. He later planted slips from the branches, which took root, and would be harvested two Christmases hence.

Cassava has been cultivated here since the earliest times, having been imported from the West Indies. Its many uses made it a very worthwhile crop. The first “pies” were probably meat pasties made by English settlers with a gradual evolution into the one-pie dish.

The method of preparation has varied little. With the roots being scraped (now peeled with a potato peeler) and immediately thrust into water to prevent discolouration. The cassava was then grated on special large graters or even on empty kerosene tins with holes poked from inside out with an ice pick. (Jessica Cox would take hers down to Miles Market and put it through the hamburger machine!)

After the excess milky liquid was squeezed from the grated root (Mrs. Lambert’s mother used flour sacking to squeeze and drain with) the procedure continued much as it does in my own kitchen.

Nowadays, I imagine that the microwave could be used for cooking the pie meat, but there is still no substitute for the long baking and the basting process. The brick oven probably did it best, and I’m told that the fire was stoked for about two hours or more until the bricks were white-hot. The heavy pies were placed on long oar-shaped pieces of wood so as not to disturb the glowing coals. I’m told that thrift Bermudians often used the ubiquitous kerosene tin as a baking pan after the sides had been rolled down to the required height and a fire had been burned to evaporate the fumes.

Since there was no refrigeration, all the cooking was done at the last minute. No wonder the housewife stayed up all night on Christmas Eve!

With your skills, my hints and the enclosed recipes, future generations are assured delicious and traditional cassava pie at Christmastime.

Directions:
Boil chicken in a large pot with every kind of seasoning you have available. A couple of chopped carrots and stalks of celery will make the broth rich and savory.
De-bone chicken and reserve broth.
Mix (unfrozen) cassava that has been drained of all its juices as much as possible, with eggs and soft butter. Don’t try mixing it with anything but your hands. Add sugar and a good pinch of all the spices and mix well.
In a large, well-greased roasting pan, fill to about 1 1/2 inches of the pan with the cassava mixture. Add the chicken in an evenly distributed layer. Top with remaining cassava (another 1 1/2 inches) and prick with a fork. Then add about a cup of chicken broth and put in the oven at 350 degrees F. This will require approximately two hours of cooking. Remember to baste with chicken broth every half an hour. The pie is done with the knife inserted into the middle is clean. Serves 12 or more. This pie freezes beautifully and will allow you to enjoy it at Easter.

The day before, boil gently: 4 lbs of chicken breasts (bone in) and one pound boneless thighs. Boil too a small pork loin. In chicken broth (real or tinned) to which has been added one celery stalk, one chopped carrot, three bay leaves and one bunch fresh thyme. Cool a bit and then skin and de-bone. Cut up pork into small pieces. Strain broth and chill. De-fat broth and save.

Defrost and drain 6 lbs of cassava.

Stir in cassava and mix well.

Pour half the cassava mixture in a large deep greased pan, pressing it up to cover the sides. Evenly put in mixed chicken and pork with little broth.

Cover top with batter, making a hole in the middle and making a ridged pattern with the tines of a fork all along the top.

Bake at 350 degrees F for about two hours, basting with chicken broth every half hour.