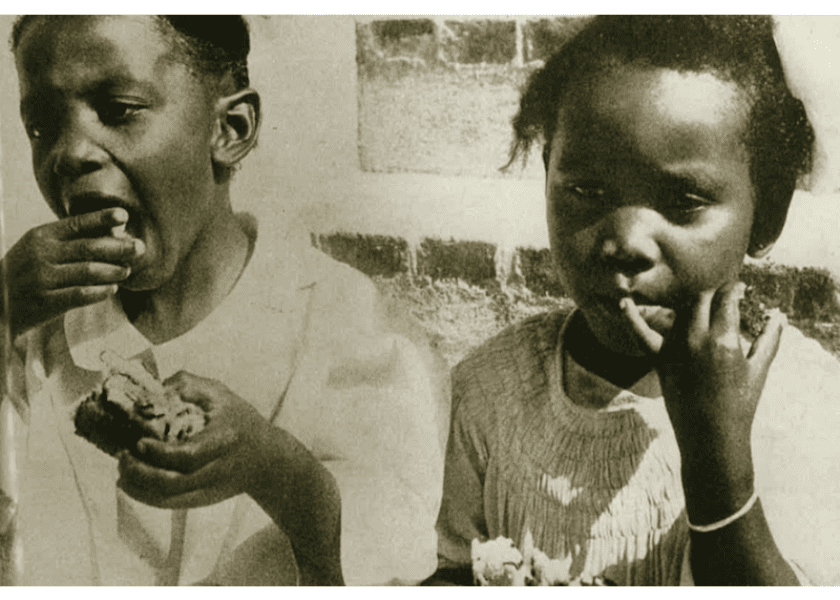 Cassava pie is as inextricably linked to a Bermuda Christmas as, say, turkey and plum pudding. We all have our special recipes (adapted over generations) of the sweet and savoury dish proudly served at Christmas dinner and, if you are lucky, for leftovers on Boxing Day. Here we repurpose the first article about cassava pie to appear in The Bermudian from December 1938, written by Edith Lightbourne. The photos, also from 1938, were taken by Walter Rutherford.

Every year, about the time the red-leafed poinsettia is ablaze, brick ovens – many of them haven’t been used for twelve-month – are put in readiness to receive, and bake, the cassava pie that is Bermuda’s time-honored Christmas dish. Making the pie is a Christmas ritual in every house, like going to the parish church on Christmas morning. It becomes the main diet of our populace for Christmas day, Boxing day, and thereafter as long as the pies, and gastric endurance, hold out.

In the bibliography of Bermuda folklore, no volume or chapter of a volume has been dedicated to cassava pie. Indeed, our national cuisine has lacked historians. In this land of brick ovens and kitchen fireplaces no bard or commentator (many have eaten our bread, drunk our wine) has sung its merits, its subtleties, its origins. No daughter of the soil, until recent years, has preserved in book form recipes learned at a mother’s knee – and in the old days little girls did not wait to grow up before they learned to turn the griddle cakes, to tend the steaming cauldrons.

With those who attribute this lack of culinary literature to an absence of the art, who say that, with the exception of cassava pie, Bermuda can claim no culinary distinction, I beg to differ. The art of cookery is not merely the ability to produce new and strange dishes. A good cook is unconscious of her artistry. So, it was with our old-time Bermuda housewives. They baked their pies – not on Christmas day in the morning, because the root of the cassava requires hours, even days, of preparation before it is fit to be eaten – as they bake their bread, with the simple faith and whole-hearted assurance that goes without knowing how to bring out the best in every simple ingredient. Instinct, with them took the place of measuring cups, and recipes were from memory rather than the cook book. They mixed their ingredients with an inspired hand, putting in first a little of this, then a little of that, like kindly sorceresses.

From them was born the Bermuda cuisine. They gave us cassava pie. They gave us also sweet potato pudding for Guy Fawkes’ Day, and that typical Bermuda Sunday-morning breakfast dish, codfish and bananas. The making of jams and preserves form the loquat, the Bermuda (Surinam) cherry, the bay grape, and other fruits indigenous to the island, has been the pride of generations of these, our unsung, cookery artists.

Call it then a kind of Providence who has preserved their delicacies for us. For, it is certain that had perpetuation been dependent on the printed word, these would be forgotten dishes, their origin as dark as the brick oven the traditional cassava pie was baked in.

The cassava plant, Manihot utilissima, is native to South America, but it has been introduced into most tropical regions, and is extensively cultivated in the East Indian archipelago, from which, as well as from Brazil and other South American states, its starch in the form of tapioca is a staple article of export. In the West Indies, cassava is also present and it was probably from there it was brought to Bermuda.

Cassava is root stock. Its roots are farinaceous and fusiform, sometimes attaining a length of three feet and a weight of twenty or thirty pounds. Its sap contains hydrocyanic acid and being therefore highly poisonous, the root cannot be eaten in fresh condition.

From the cassava root, many different food preparations are made in Brazil. The roots are preserved for us simply by being cleaned, sliced and dried; from such slices manioc or cassava meal, which can be used for cassava pie, is prepared by rasping. The starch also is separated and used for food under the name of Brazilian arrowroot; and this, when agglomerated into pellets on hot plates, forms the tapioca of commerce.

In Bermuda, though cassava grows well and yields its yearly crop unstintingly (the root is dug in December and the stalk may be planted again in January or February), no commercial use has ever been made of it. The reason may be that the deep soil preferred by cassava is relatively scarce here; on the other hand, arrowroot, also a tubular root, was once grown here in great quantities and was once one of our main exports.

However, today in many backyards and kitchen gardens, particularly those belonging to the descendants of our early colonists, you still see small patches of cassava growing. The bushes – for the plant will grow to bush-like proportions – are allowed to wave their small shiny fan-shaped leaves in the air for one year before their roots are dug up to make Christmas pie for the family.