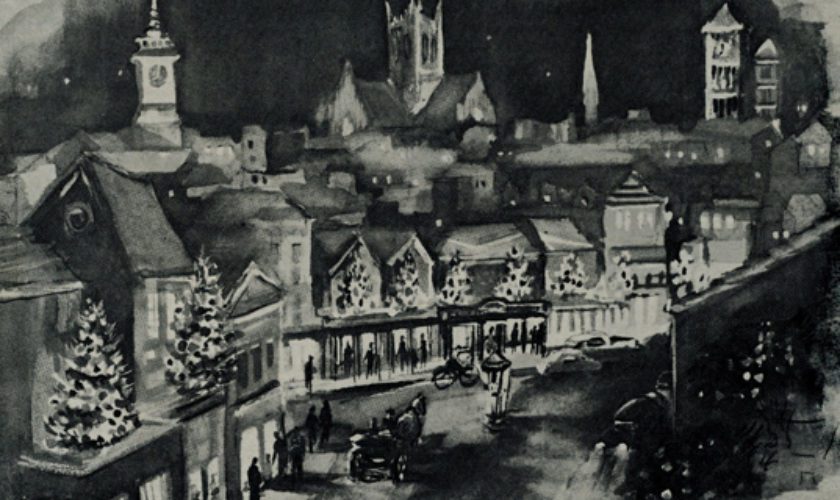 Home for the Holidays: Christmas and Cassava Pie

It is at this time of the year that the thoughts of travelers turn homeward. Many will be dreaming of a white Christmas, but for the Bermudian far from home there is only the dream of family, friends and cassava pie.

Having flourished our sheltered glades for more than 350 years the cassava root (Manihot utilissima) first was brought here in 1616 in the little ship Edwin which Governor Daniel Tucker had sent to the Virgin Islands to seek new plants to provide a greater variety of food for the early settlers. Referred to in early documents as “cazabe,” this as the name given to it by the Taino Indians of Haiti who, like the people of Congo today, used this manihot as a major item in their diet.

Because when dried it kept well, as does the farina much in use here today, the early Spanish sailors used “casabe” on long voyages and sometimes had nothing else to eat. In Jamaica and other islands to the south, cassava flour is used to make the delicate lace cakes which, battered and toasted, are served at tea, and the more substantial “bammy,” somewhat like our Johnny-bread which is served at breakfast. The root is also fried and used as tapioca and boiled and used as a vegetable; but nowhere else has it become an ingredient in such a culinary triumph as in Bermuda.

How came this dish and why? Our forebears were quick to adapt what they found here to the uses they had known in the old country. Coming, as many of them did, from the West Country no doubt they looked for the means to make their well-loved Cornish pasties. Following the advice of the good Rev. Lewis Hughes given in 1621 to cultivate the “casua roote” as it was “a great blessing of God unto you” and “makes as fine white bread as can be made of wheat,” they learned its many uses, the favorite being the Christmas pie and cassava bread.

Bermuda has produced no Robert Burns to immortalize our pie with rapturous lines, but the recipes which have been handed down from mother to daughter through the generations are indeed poetry to the bride excitedly engaged in the preparations for her first Christmas.

It seems that Christmas trees were not in general use before the turn of the present century, but following the fashion set by the Prince Consort for the royal children, Christmas trees began to appear in Bermuda about that time. Homes then as now were decorated, the poinsettia being used especially on the dinner tables, where it could be laid flat and kept fresh, the stalks being wrapped in damp cotton. The art of picking poinsettia so that it will not “bleed” or droop is something that only comes with experience.

What fun it was to tramp over the wooded hills weeks before Christmas to pick out your Christmas tree, and then on Christmas Eve to go with the grown-ups, axe and saw in hand to cut the top from the cedar tree that had pleased you most. Of course, when it got home it was always too big. Later, when you were old enough, you were allowed to go all the way to Holly Hill and bring home bicycle baskets of Bermuda holly.

Several days before Christmas the cassava was dug. If you grew your own no doubt it was of only one year’s growth. Anything from ten to 20 pounds, depending on the size of the family, would be carried to the house, probably in a feed bag, and placed in a tub of water to soak overnight. Next day it would be someone’s task to scrape off the brown bark and put it back to soak in clean water. Next came the task of peeling off the thick ivory-coloured shell and at last it was ready to be grated, the most arduous task of all. The Rev. Hughes advocated grating with “a rough pumice stone… found upon the Bayes” if nothing better was available, but it is far doubtful if this would get one very far. His other suggestion no doubt would be better, “with nayles broad pointed driven thick through a board.” It is certain that many homemade graters were devised through the years, including those made from that ever-useful item the kerosene tin. In time good graters could be bought.

The grating of the cassava done, the next step was to wash it once again “and squeeze in a coarse cloth to press out the milk” or starch. At least one cherished recipe, that of Miss Mary E. Jones, advocates, saving “1/2 a cup of juice to pour again into the mixture for added flavour.”

Then came the time for the expert hand of the mistress of the house. No matter who had done all the rest, the mixing was far too important for any hand but hers. Now the stirring and tasting began, the time for adding a little of this and a little of that and just a pinch of something else until a perfect texture and flavour was achieved. It was then ready for the pan or baking dish. The dish once lined, gently was placed therein the savoury mixture of meat and fowl which had been simmered to perfection, a little gravy was added, and the whole covered with the remaining cassava.

Cassava pies are baked in whatever oven you may have, but those who know will stoutly declare that none tastes quite like those masterpieces baked in the old brick ovens of not so long ago. Hours before the pie was ready to be baked, the oven was filled with cedar wood which burned brightly until the bricks were white hot. A long-handled spade was then used to remove the smouldering charcoal, the pie was placed in the oven, the door closed and the pie left to bake until done. Some cooks would open the door to baste the crust from time to time with gravy; others, weary with toil, would not put the pie in the oven until midnight, then leave it untouched until morning.

Putting the pie in the oven may have been the last act of Christmas Eve, but much had gone before and we must not forget the Christmas pudding. If steamed, these had probably been made sometime earlier. It would seem that most Bermuda housewives liked the big plum puddings which they boiled in a pudding cloth which they would “slip into boiling water, flour well, tie the pudding in as tight as possible, and boil for 5 hours over a quick fire.” There were the instructions given by Mrs. John N.B. Middleton more than 100 years ago for her pudding for which she used to “carefully pick and chop 1 lb. Suet, mix well with 1 lb. Flour, add 1 lb. Raisins (stoned), 1 lb. Currants, ¾ lb. Citron, 8 eggs, a tablespoon full of powdered sugar, 1 teaspoonful of mixed spices, ½ teaspoonful of salt, ¼ pint of Port Wine and Brandy.” This to be served with a brandy sauce. The lady added, “An English potatoe boiled, and beaten with a little milk very smoothly will improve the thickness of the pudding.” The making of this fine pudding would have been just another thing to do on Christmas Eve.

Unlike arrowroot, cassava, nor its starch, have ever been exported commercially, although it is recorded that Governor Nathaniel Butler in 1620 sent cassava among other things to the colonists in Virginia who were in great need. Today, cassava is a substantial commercial enterprise for three members of the Hollis family, who grow and grind the root, package it and sell it through the shops and supermarkets throughout Bermuda. The cassava is now always of two years’ growth, the yield thus being greater. This year probably between 14 and 16 tons of root will be dug up.

The cassava slips or sticks are planted some time in either January of February and are allowed to grow as tall as they will, topping only being carried out if an impending gale seems to make it advisable. The untopped tree gives a greater yield as during the winter months there will be a larger amount of sap to
return to and nourish the roots. Roots will grow to a length of three feet and a single tree may yield as much as 20 to 30 pounds of dug cassava. The wastage is high and when grated yields only one-third of its original weight in meal. Although the roots are still dug by hand and the brown bark scraped off by hand, the rest of the work is done by machine, the starch being extracted by spinning.

Perhaps more than any other dish cassava pie is a matter of “to each his own,” for there are as many variations to the recipes as there are cooks to prepare them. To a devotee, each new pie sampled is an experienced to be savoured. Some pies are light in colour, some are dark, depending on the quantity of spices used of the absence of any; some are sweet, some are not; some have pork to lend its flavour, other have only beef and fowl, and so it goes.

Many people in Bermuda today use the farina which is imported from the West Indies, which when soaked in milk has the same consistency as the cassava. In spite of the work involved, however, there are still some who prefer to grow and grate their own cassava, as does the lady who told me, “Soon I will dig the three trees growing in my garden which I planted on the waning of the moon last January. Then I can bake a real cassava pie.”