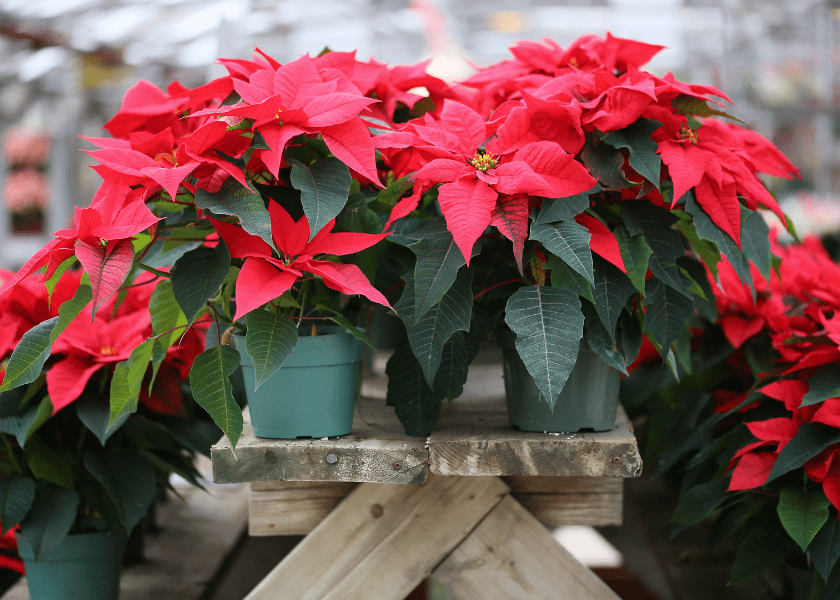 During the months of December and January the Poinsettia is at its best showing to full advantage the large coloured bracts or leaves. These bracts are red in colour which gives a very warm effect to the countryside, for splashes of this pillarbox red are seen in the gardens of most residences throughout Bermuda. The plant providing this colourful effect is none other than the Poinsettia pulchirrima or as it is commonly known in Bermuda, the Christmas Bush. In most cases the common name of a plant rarely describes the plant in any way, but the common name given the Poinsettia does at least refer to the time of the year when the plant is most conspicuous. The plant is freely depicted on Christmas cards and has thus become a symbol of the Christmas season in the tropical and sub-tropical parts of the world.

An interesting characteristic of the Poinsettia is that the colourful part of the plant is not a true flower, but is actually a series of deeply coloured leaves, or to use the botanical term bracts, which develop immediately below the flowers. The actual flowers are rather inconspicuous. They stand out in the centre, surrounded by the colourful bracts, as small round objects, with a reddish tip and slightly protruding pistils. On the side of this more or less swollen receptacle appears a cup-like protrusion with yellow edges, which are the stamens of pollen-bearing part of the flower. The flowers of this plant are typical of the family Euphorbiacea, a large family containing many succulent plants frequently found growing in very dry or desert like conditions. All the plants of this family contain a milky sap which flows very freely when the plant is wounded. If this sap comes in contact with the eyes or open flesh wounds of humans or animals it sets up acute irritation.

From an ornamental point of view the Poinsettia is a most useful shrub for giving colour to the garden during the winter months. It is one of the easiest plants to grow, for it is readily propagated by cuttings. The plants are usually pruned back very hard in March. These prunings will make excellent cuttings which may be planted directly into the site where they are intended to bloom. If the plants are needed for internal decoration these cuttings can be inserted into six-inch pots or similar receptacles and grown on through the summer for winter flowering. In this case it will be necessary to prune the plants once or twice during the growing season to keep the plants bushy. In fact is it common practice to prune the plants once or twice during the months of July and September in order to prevent them becoming too tall. The writer finds however that where the plants can be left unpruned the blooms are much larger and thereby create a much finer spectacle. Unfortunately, the plant is very susceptible to wind damage and the tall plants are usually stripped of the leaves by the autumn and early winter winds. The Poinsettia will thrive in practically any garden, but it should not be planted in the very exposed positions since the winds will never allow the plant to be seen at its best.

In addition to the common red variety there is a pink shade and also a creamy white variety. Neither of these varieties are a conspicuous as the red one. Both double and single kinds are common in the red variety. Although the Poinsettia is frequently used for internal decoration as cut flowers, especially for the Christmas festivities, it is difficult to get the flowers to stay rigid. They usually wilt very quickly. Placing the cut ends of stems in boiling water or sealing the end of the stem with a red-hot iron sometimes assists in keeping the flowers in a fresh condition over a longer period.