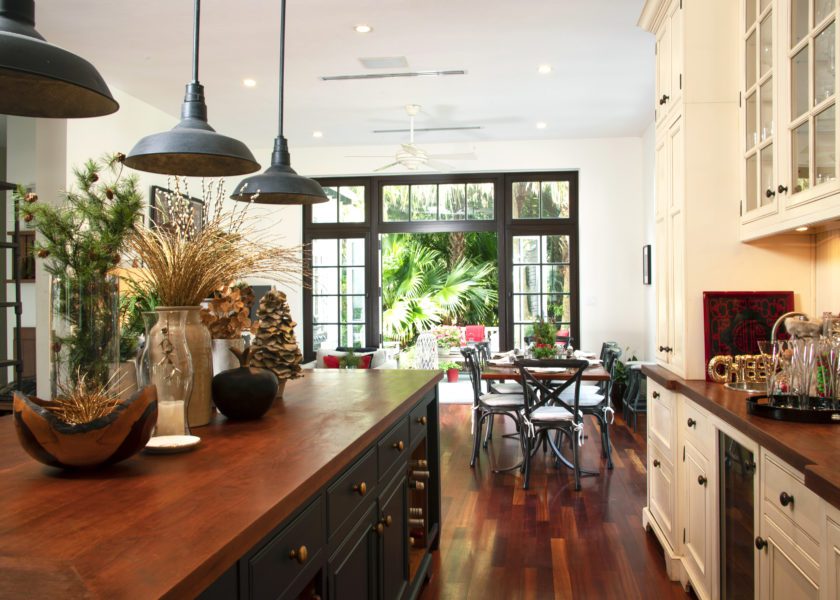 This homeowner takes us inside their family home dressed exquisitely for Christmas.

For many of us, Christmas decorations summon significant family memories. This is particularly true for this homeowner, their husband and sons since they moved into their current house on Christmas Eve, 1991.

“We had no furniture,” the owner explains, “nothing but the Christmas tree and the decorations.”

But their home’s history also has a special resonance on Christmas Eve, given the traditional stable setting of the Nativity. That’s because the house was converted in the late 1950s from the horse stables of Huntley Manor or Huntley Towers, built in 1901. The homeowners did more renovations before moving in, enlarging the swimming pool and creating sets of French doors leading out to the back patio and the pool area. However, the front door is actually the original stable door, a white Dutch door complete with panels and cross beams. No wonder their Christmas wreath, decorated with pinecones inherited by the homeowner’s mother, red berries and fairy lights, has pride of place on the interior side of the front door.

Outdoor space is very important to them and indeed the pool and patio areas have the effect of additional rooms. During the festive season, red cushions decorate the benches and chairs around the table in the eating area, and more red cushions and throws in the sitting area give pops of colour to the white sofa and chairs, while lanterns add to the ambience. Large white ceramic candle holders and fairy lights twisted around palm tree trunks add a magical touch, especially at night when, depending on your vantage point, the interior dining room acts as a lit-up backdrop for the pool area, thanks in part to the gold chandelier with glass light shades which hangs from the ceiling over the dining table.

“I saw this chandelier new for $25,000,” the owner explains, “and then I bought the same one second-hand on eBay for $200.” All year round it’s beautiful, illuminating their own artwork on the walls but, of course, it comes into its own at Christmas, as does their Athlone Blue Coalport wedding china which again they use year-round. Special touches to the Christmas table include glass candle holders the owner created, which act as a centrepiece. The owner starts with plain empty glasses into which they drops small silver jingle bells. Then they adds water and greenery, usually juniper from the garden. The glasses are then topped with lit white floating candles. The bell theme is picked up in the napkin rings decorated with a single bell. They add circlets of green velvet to the blue-grey crackers that echo the blue of the tableware.

The homeowner, who studied three-dimensional design at college, makes most of the decorations throughout the house. In the bar area and kitchen, they have colourful bottles and jars containing treats which they have painted and decorated, creating new ones each year. In the kitchen a variety of dried plant material catches the eye, especially heads of agapanthus they have sprayed gold and placed in a wooden bowl, as well as gold-sprayed fronds taken from the palms outside and arranged in a beige ceramic jar. Red ceramic vases with greenery and cone arrangements set the Christmas theme for the less formal dining table in the TV room.

In the living room, the fireplace with lighted log fire and fairy lights-lit greenery atop the white mantlepiece contributes to the festive atmosphere as does, of course, the dramatically tall Christmas tree decorated with a myriad of golden lights. “The tree is always real, and we have always tried to get a tall tree as the ceilings are so high.”  It’s tied to the French doors since in the past it has attracted the attention of Dexter their cat, who on more than one occasion tipped it over.

“The most important part of the tree is getting the lights right,” they add. “Each year, I try to count how many strands we use but somehow lose track.” The owner has an unusual way of placing the baubles: “I keep the outer balls in muted colours and stick anything slightly more colourful deep inside.”

Ornaments, often including ones collected on their travels and ones their adult sons made as children, also tend to be inside the tree. Fortunately, Dexter no longer goes for them. He seems to have calmed down. “Now we find Dexter most afternoons happily napping under the tree.”