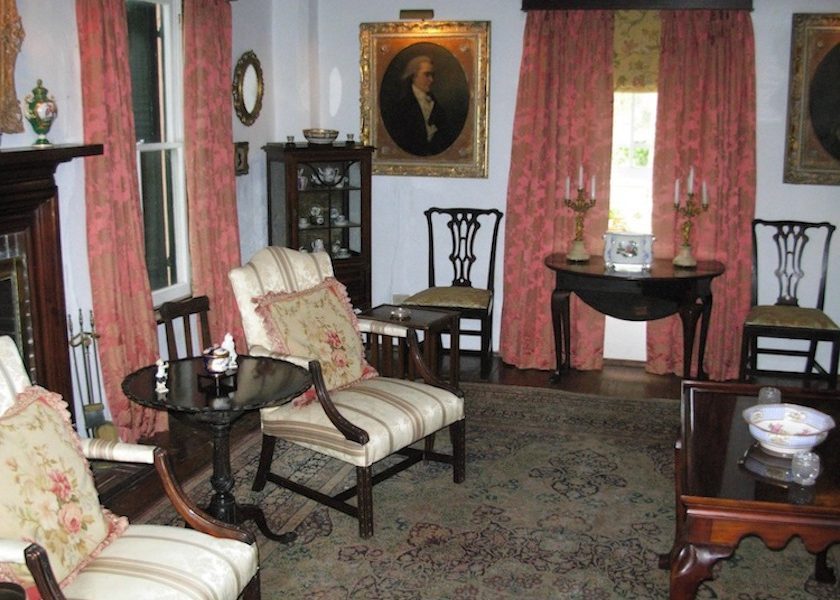 When a storm blows in from the northwest, and a sharp wind funnels between the hills which form a ridge above Orange Valley, the old house heaves and creaks and the windows rattle ominously.

Standing in the dimly lit hall, crowded with eighteenth century cedar chairs and the elegant grandfather clock which has stood in the house since the time it was built by my ancestor, Captain William Cox in 1796, one is grippingly aware of the past. With the gale blowing outside, the atmosphere within the house seems alluring.

“There must be a ghost here!” says a visitor entering Orange Valley for the first time. I answer blithely that there is.

The subject is rather pursued because, in passing, I do not like to talk about the ghost. Although I have never seen it, I actually experienced it some years ago which caused me serious alarm. At the time, I was occupying the west bedroom upstairs. Night after night, I was awakened by strange steps pacing back and forth across my room. Eerie lights would also pass by the opened door which led into the day room and small objects on the bureau would move of their own accord.

Sometimes I would feel that I could not breathe, as though I were being choked. Finally, after many unnerving encounters, I called out loudly, “Please, whoever you are, stop this. You are frightening me!”

In the next instant, I was aware of someone standing over me. A warm hand touched my neck. It was as real as if my own mother had touched me. After that night was never again troubled by the ghost.

There are those who have seenthe ghost, or perhaps, I should say ghosts at Orange Valley. One summer afternoon, some 20 years ago, a cousin brought her twin daughters to a young family member’s birthday party. As my cousin was making her way back around the house to leave, she suddenly came upon a woman wearing a long, white dress. Her hair was pulled up behind her head.

“The mysterious woman seemed to want to communicate with me, but she said nothing” recounted my cousin. “She just gazed intently at me. She next beckoned me towards the old rose garden. I looked toward the garden, some 40 feet away and then back at the mysterious woman but she had vanished as quickly as that! I knew then that I had encountered a ghost. For a while I had an odd feeling about it but I tried not to let it bother me.”

A hundred years ago, a spinster named Laura Cox lived at Orange Valley and she took a special interest in growing roses. After her untimely death of palsy in 1861, the rose garden was left to overgrow with weeds. Could the mysterious apparition have been Aunt Laura? No one can say for certain.

Back in 1974, my youngest brother and a few of his friends pitched a tent on the extensive grounds around Orange Valley where they camped for a night. Returning to the house at dawn the following morning, the boys distinctly noticed a middle-aged man staring down at them from the south window of the east bedroom. Although there was sufficient light in the sky, the garden was still dim. My brother shone his torch on the mysterious man whose eyes gleamed as the light passed over them. He was portly and he wore a dark cloak. All of the boys saw him clearly. Soon after, he faded away. In the next instant, my father was awakened and the upstairs rooms were thoroughly searched. No one was discovered.

Years later, when I as preparing a history of Orange Valley, I asked my grandfather why the south window of the east bedroom was much larger than the other windows in that room. My grandfather explained that when he was a boy, the room was partitioned. He slept in the northern half, while an eccentric uncle named Aubrey Cox used the southern half. Uncle Aubrey put the large window in because each morning he was in the habit of rising early so that he could stand at the window and watch the approaching dawn. Remembering the episode my brother and his friends had related to the family years before, a chill ran down my spine!

Only recently, while conducting a tour of architectural students through Orange Valley, a young woman on the tour took me aside and said, “You will probably think me crazy but do you know you have a ghost in the house?”

“Well, we have several.” I answered.

“No, this is serious.” The woman clasped my arm tightly. She was clearly disturbed.

“I have communicated with the spirit of a woman of about 40 years of age. She says her name is Mary and she is very distressed because her husband is away at sea and he doesn’t know she is ill.”

Looking through the family genealogical records, I learned that Orange Valley’s builder, Captain William Cox, had married a woman named Mary Robinson in 1790, who died of pneumonia at Orange Valley in April 1806, aged only 42. At the time of her illness and death, Captain Cox was sailing in the West Indies. I shuddered to think that the spirit of Mary Cox had been searching for her husband all these many years.

A large India rubber tree, planted by William Cox in 1947 marks the spot where the original drive to the house began. Sitting formidably upon its rising mound, the old Georgian-style house still reigns proudly over its garden of twisted palmettos and cedars. The past reflecting the continuum of lives intertwined through the tree of life…relatively speaking.