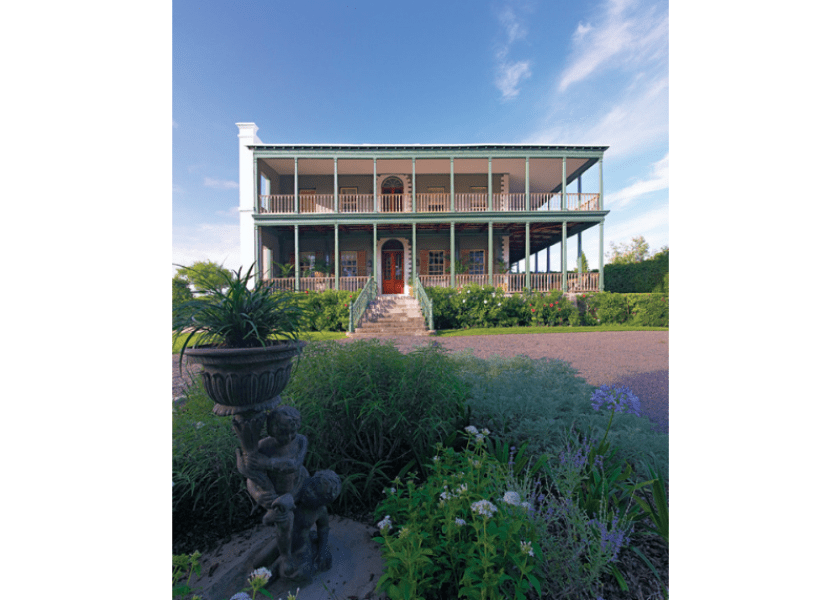 My acquaintance with Belair began in the summer of 1970. Theatrical director Jack Manning and his Bermudian wife, Frances Smith, were renting the house from the Moncure Robinson estate. At the time, I was friendly with Frances’ younger sister Lisa and we savoured long summer afternoons on the spacious Belair verandah, while we took turns reading aloud. Jack Manning listened with patient interest, offering tips on diction and delivery.

My visits culminated in a party given on the last Friday of August. Around ten o’clock, I ventured up the dark stairs in search of a bathroom. At the top, I turned left and passed through a bedroom and an ante-room into an old-fashioned bathroom, which seemed not to have been altered since the 1940s. When I turned to leave and opened the door towards me, it budged a couple of inches and then became firmly stuck. Someone was on the other side pulling on the handle. I began to pull harder and the door jostled violently. Clearly, there was a tug-of-war in progress!

“What’s going on!” I yelled. The door released quickly and I was thrown back against the bathroom wall. I collected myself and ran into the ante-room, fully expecting to find a giggling prankster. I was surprised to find no one. In fact, the room was filled with eerie emptiness. I moved on into the bedroom. No one. It began to sink in that I had just had an encounter with the supernatural.

I hurried downstairs to report my experience to the gathering. Several of the guests looked askance at me, but the Mannings accepted my tale and in turn, related the following.

The evening of their arrival at Belair, they went to bed early. After all, they had travelled all the way from California and were very tired. Late in the night, Frances Manning was shaken awake. She looked up to see a white woman standing over her.

“She was commanding,” related Frances, “almost arresting. She never spoke, but I will never forget her befuddled expression. It was as much to say, ‘What are you doing in my house?’ I quickly turned to wake Jack and when I looked over my shoulder, the woman had vanished.

“Suddenly, every single light switch in the house mysteriously started clicking on, one by one. These switches are the old-fashioned ones which make a distinct click as they go on or off. The whole house was soon ablaze with light, from top to bottom. It was frightening to say the least! Jack, who is an open-minded soul, spoke aloud as he went to turn off the lights throughout the house, and said, if the ghost of the woman who visited us was listening, she should not be alarmed as we were invited guests of the owners. The ghost must have understood because we never had our lighting system interfered with again.”

Years later, when I became interested in the history of Belair, I remembered the Mannings’ tale and wondered who the ghost of the mysterious woman might have been.

My cousin, the late Hereward Watlington, had a passionate interest in Bermuda’s historic buildings. Hereward considered Belair one of Bermuda’s architectural gems. Certainly, it ranks among the finest 19th century houses in Bermuda. The Belair property, situated above “the kettle” has been in the Albouy family since 1692. The house, as we know it today, was rebuilt about 1840 by a relative of his, Francis Albouy, a Hamilton merchant of considerable influence and wealth. His wife was Anne Tucker, daughter of the Speaker of the House of Assembly, James Tucker of Bellevue.

Mrs. Albouy was an exacting woman of strict principles. I would guess that the ghost of Frances Manning saw on her arrival at Belair was she.

Reading through Herward’s notes, I discovered that I am descended from one John Albouy, a sea captain of Smith’s Parish, and a poor relation of Francis. It is recorded that, when Francis was a child, his family took him down to Smith’s Parish for a picnic with his cousins, taking with them the Paget Albouy’s china to be used at the picnic. Captain Albouy, in jest pitched his relatives’ fancy plates overboard and instead, cut several ‘dishes’ out of palmetto leaves, saying, “This is what we use on picnics down here!”

The Paget Albouys were not amused, though their china was retrieved undamaged. Perhaps Frances Albouy’s ghost had decided to return the jest played on his family by my long-dead ancestor when I was treated to that tug-o-war with the bathroom door. I was not amused at the time, but I can smile now. If it was Francis Albouy, I’m sure he got a tremendous chuckle out of it.