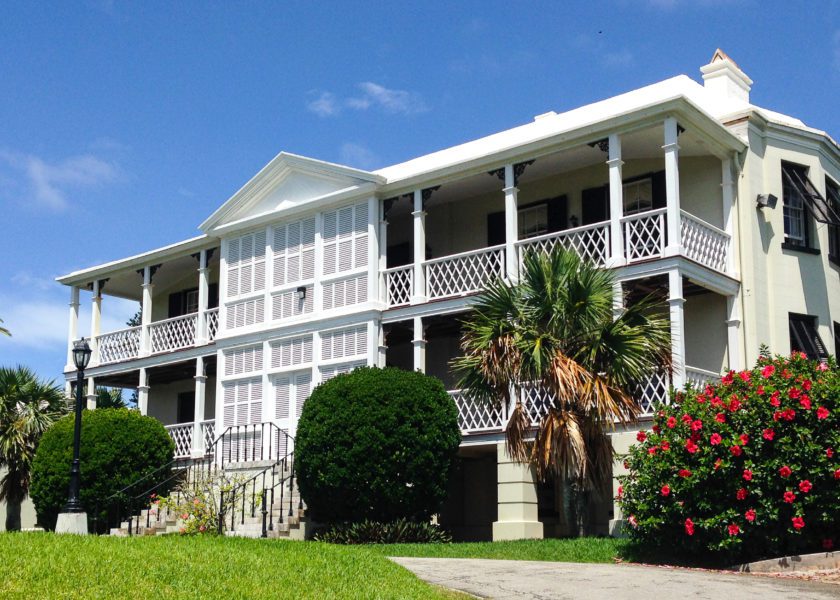 Do people still see ghosts at Camden? If you make the story too ghostly, Bermuda will not be able to use the house for official functions!” So remarked a lady from Flatts in 1994. She recalled visiting Camden during the 1950s when it was the home of Violet Tucker, the widow of Alexander Ewing Tucker. That was years before the house was first opened as the Premier’s official residence.

“I remember one evening when I was invited to dinner by Mrs. Tucker. I had arrived in time to see what had to be the ghost of a youthful Miss Catherine Tucker, a former resident of the house, come down the staircase. She was beautifully dressed, in a high-waisted, silver-grey gown with a lovely Norwich silk scarf around her shoulders. Silently, we went into to dinner together but she disappeared as we came towards the table! So real was the experience, that only afterwards was I reminded that it was a friend from the past, old ‘Miss Cate’, who had long since passed away.”

“In those days, one’s arrival was announced by a butler in old-fashioned costume. Occasionally I was welcomed at the door by a beautiful cat which vanished when I bent down to stroke it.”

“It was a very lovely home and I felt it was a happy one. My memories of the evenings spent there are special, indeed. Always, at the end, I was driven home in Mrs. Tucker’s carriage.”

Nobody knows exactly when Camden was built. However, its unmistakable Georgian façade probably dates it from the last quarter of the 18th century. During the 1780s, it is noted that a Frances Jones owned the home. He died in the house, of yellow fever, in September 1796 and so folklore has it, lies buried on the estate. In March 1980, what was taken to be his ghost was spotted on the upstairs landing, standing at one of the widows and gazing out towards the South Shore, over which the house commands a prominent view.

After Francis Jones’ death, Camden was bought by the Hon. Henry James Tucker, a one-time mayor of Hamilton. He began the successful production of arrowroot for export in a factory at the back of the main house where, it is recorded, “one would have seen the happy face of ‘Princess’, long a servant at Camden: and the whole group of laughing, chattering women, scraping the arrowroot in the peeling room, and often breaking into song.”

It is said that all these years later, the echoes of the arrowroot peelers, singing heartily, can still be heard in the back garden on still, summer afternoons.

The old factory is indeed haunted. Apparently a Department of Agriculture employee, while working alone in the building one evening, had such an alarming experience with a ghost there that he fled, never to return. To this day, he cannot bring himself to talk about the experience.