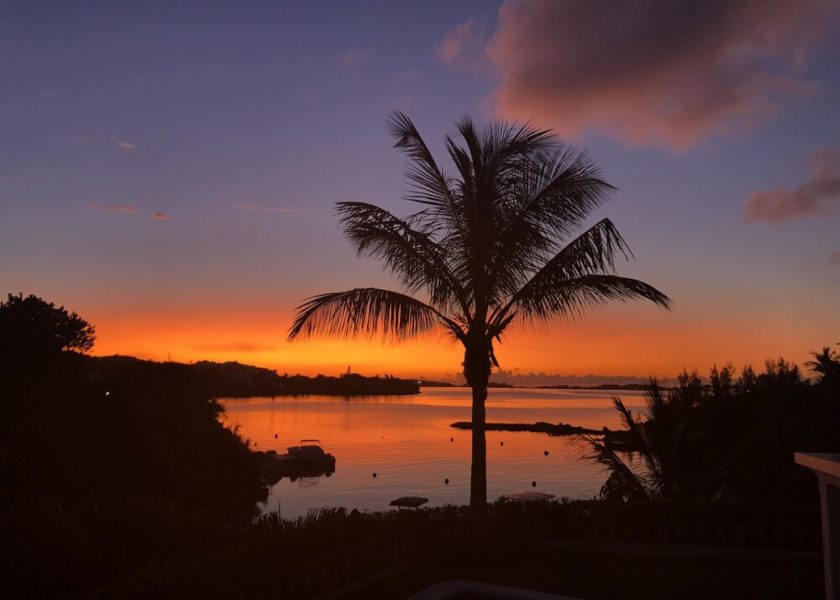 Chan Mar was built in the late ‘30s or early ’40s by a man named Holmes. Originally, it was built as the guest cottage for a larger house there in Tucker’s Town, and it was all one property.

“It’s interesting. I tried to trace the Holmes family after the incidents we experienced, but they were gone. The addresses we had on the sales agreement were no longer current. My father, Reuben Dickinson, purchased Chan Mar in the early 1950s, and we used it as a summer cottage, because that’s all it was – a small, two-bedroom place – and we used to spend summers down there as a family, my parents, my sister and I. Other than that, it was usually rented out to visitors.

“After I was married the first time, we decided to move to Chan Mar and make it our home. At that time we had one child, Rob, who was about four years old. That was in 1966 and we were there until 1968. It was during this time that we had a very vivid situation with a ghost.”

Joan – “Did you actually see this apparition?”

Tommy – “No. We had things happen there which one could say were ghostly in fashion, but given the area at that time – there were no street lights, and no other people in residence, we being one of the few Bermudian families living there – all sorts of things could be conjured up. However, my mother did live through the event, and it was her experience which really explained the phenomenon to us.

“She used to come down periodically on weekends to stay with us. Because of the layout of the house, she would stay in the same bedroom as Rob. He was, in fact, still in his crib at the time. Mother was sleeping in a single bed across the room from Rob’s crib. She was fairly close to the doorway. Just outside the doorway was the bathroom, and the bathroom light was left on for Rob’s sake. But the light shone right onto Mother’s bed.

“As you know, Mother had a propensity to have a couple of drinks after dinner, but this night Mother went right to bed. She was wakened between three and four in the morning. She opened her eyes, and there was a man standing at the foot of her bed. He was a nice-looking chap, dressed in a golf shirt – one with three buttons at the neck, short-sleeved, and wearing Bermuda shorts. And he looked at her as if to say, ‘What are you doing in my bed?’ But it was in a quizzical manner – not at all threatening.

“Remember that the light was shining right into the room, so Mother felt, if she could only see a photograph of him, she would surely recognize him.

“And that was one of the reasons I tried to trace the Holmes family. She even mentioned the colours he had on. Surprising – a red golf shirt. He was just a normal, contemporary man.

“About twenty minutes later, she sensed that the presence was there again. She rolled over, and this time the presence had moved towards the side of her bed, bathed in the light from the bathroom.”

Tommy – “It wasn’t just an outline, and she knew that it was a ghost. Mother didn’t feel threatened by this presence, and she didn’t know why she knew it was a ghost, but she knew. Again, she was confronted with this very quizzical look. She turned away and did not look back.

“Mother did not tell us the story the next morning, but seemed very preoccupied on the ride home. We later moved and built our home in Devonshire. Between the time that we moved and our house was built, we stayed for a month or so at Shangri-La, our family home. It was then that Mother sat us down and told us of her experience. Her story scared the devil out of us, but it brought back several memories.

“One was that Rob, while he was a child at Chan Mar, spoke of a strange man in his bedroom, and we, of course, put it down as a normal child’s dream fantasy and put no faith in it. But Mother’s experience was absolutely specific; there was no question in her mind about what she had seen and felt.

“Some time later, I ended up living at Chan Mar alone. I didn’t know if I could do that, knowing what I did about the golfer, but I was divorced and needed a place to live. I stayed there for three years, and I didn’t feel at all threatened.

“There was a peaceful feeling about the house, until one night, when I had had a particularly busy day at work. I went to bed early, hoping to get a good night’s sleep. Suddenly, there was this tremendous crash in the living room. It was so tremendous that I knew if I went out there, I would find nothing. But I was so angry that I got up and stalked into the living room, threw some knives and forks (a pleasant Bermudian euphe­mism for the obvious) into it, and yelled, ‘Go away; stop bothering me!’ I never had another problem.

“There were a number of things that could have been connected, but bear in mind that I’m a skeptic, so I just put these forward.

“One day I was down fishing on the rocks below Chan Mar. Lee, my wife at the time, came running down to be with me. I asked her what was wrong and she replied that she really didn’t know, she just felt very uncomfortable up at the house. And later on, we started playing on the Ouija board with friends. I don’t know whether people believe in the Ouija board or not, but we started asking questions about Chan Mar, and the answers we got back upset Lee dreadfully. She was in tears by the end of the session.

“Apparently there was a love triangle, and the board talked about a man being murdered at Chan Mar. The body was buried under the main house. The funny thing about the main house is that it has quite a large crawl space under the kitchen, surrounded by lattice-work with a gate in it.”