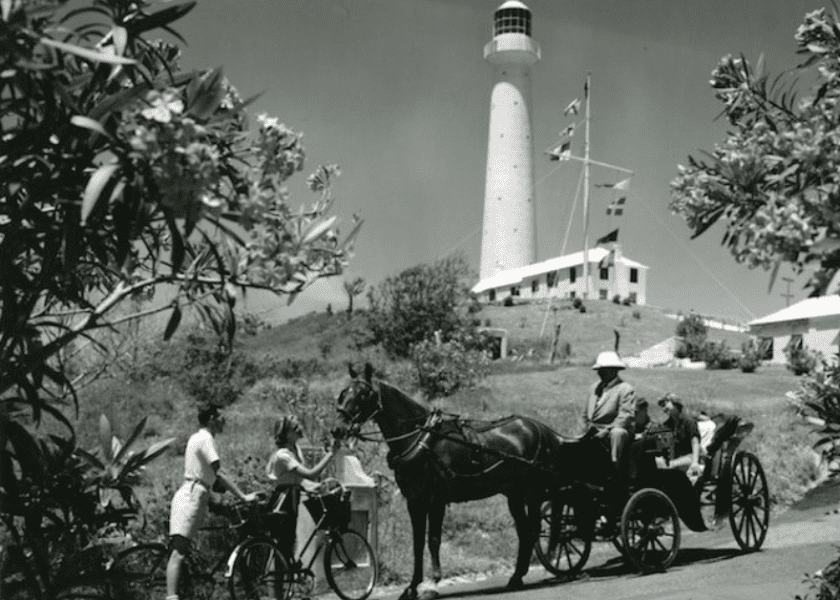 Completed and activated on May 1, 1846, accounts of unaccountable events at Gibbs Hill Lighthouse have been noted by a few past lighthouse keepers. The following was related to Mac Musson by Michael Dolding of Marine & Ports, part of whose job it is to oversee the care of our two lighthouses! Since reports along the same lines are heard from other folk, one wonders at the strange recording of someone’s anxiety from the past that left this on-going impression for others to hear.

“We lived in Gibbs Hill’s Lighthouse cottage during the period and, as is often the case with a built-in watch-keeper, I was on occasion, required to make a breathless dash to the top when the lighthouse machinery failed to operate fully. All this means is that when the light comes on it remains steady when rotating, which in itself, usually requires little more than whoever is on hand to get up there and give it the necessary shove that sets things in motion once again.”

“On this particular evening, as soon as it was clear that a nudge was needed, I made the unusual call to Bill Montgomery, the attendant electrician, in case the problem turned out be more serious and then proceeded to the light chamber 185 steps above. On this occasion, I took Beans, my feisty little terrier as company, giving him his evening’s exercise at the same time. He loved zipping up the stairs, always getting to the top long before me. Of course, I knew I’d have to carry him on the return ‘flight’ downwards…he often ran out of steam at that point!”

“On this night, I eventually caught up with him at the lighthouse well and found that it was indeed straightforward…a little coaxing from the sidelines had the machinery locking into its nightly merry-go-round…and a wasted trip for old Bill was on the cards, but, as always, once he was there it was advisable to have him double check the intricacies of this finely balanced apparatus.”

“I stood by to wait, enjoying the spectacle of Bermuda islands at nightfall, the sinking trails of sunset, the blues of outer space, the ebony cast of the land and coast and the lights…the living sparkle of street and home lights putting the stars to shame for the moment. Always one is held spellbound by such visual splendor so at variance with its daytime vividness. All spells are made to be broken however, and after calling Harbour Radio to report all well, I was readying for the downward haul with pup in arms. Turning, I heard quite distinctly the sound of footsteps hurrying up the stairs… ‘Great, I thought, here comes old Bill’ … the terrier ran to the top of the stairs as if to add his welcome, only to come to an abrupt halt, stiffen, and then, with his hackles standing on end, began alternatively to whine, snarl and bark. Now then, I thought, this is not on. What the hell is wrong with this silly dog!…”

“Darkness hadn’t fully settled in and from the catwalk I could just make out he ground below. Silly, I had thought I’d locked the entrance door after I came in but must’ve been mistaken. Yet, I couldn’t make out anything below that looked like Bill’s car. Funny…the dog was shivering and resumed his frantic behavior, this time keeping it up. My insides began to quake and I went cold all over. What is this? My own hair was standing on end now. More footsteps!…going down this time? God, if it wasn’t Bill, what was it!”

“After about ten minutes that seemed an eternity the dog quietened and looked down the stairs, tail now away. Wait for no more Mike Dolding!…I grabbed the dog and ran down as fast as I could, checking landings as I went…nothing! At the entrance door, all was still and in semi-darkness. The door was securely locked after all! I let myself out, locking up as I went, and putting the dog down in time to see him take off in happy welcome, Bill had just arrived and was getting out of his car. “

“He took the key and went to check things out. I said nothing and, I might add, I never went up there again at night without some company – usually with my wife, my dog AND a rum and ginger!”

“I have often wondered if perhaps the presence or ghost of one of the early lighthouse keepers prowls the beacon at night, checking that all is well and the light is on and operating correctly. I had been utterly spooked and still shudder at the memory.”