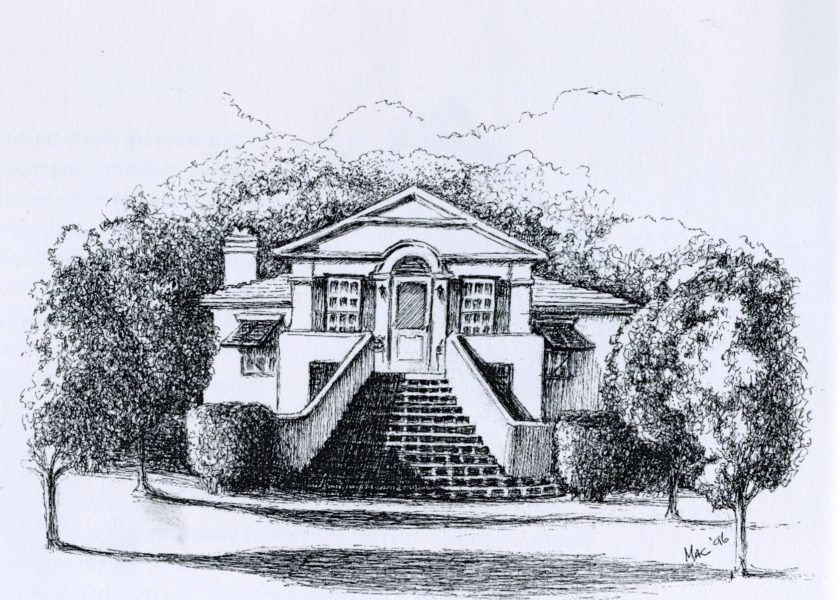 Written by: John Cox, as told to by Raymond Southern

A couple of hundred yards down the road from Camden is another old house imposingly set above an avenue of mahogany trees. This is Inlands, which was built by a leading merchant named Henry Gilbert Hunt. Hunt never lived in the house, choosing instead to rent it to a succession of tenants.

Today, within its old walls, phantoms of a forgotten world continue to live out their shadow play. Indeed, one skeptic was converted into a believer in ghosts some years back, when he was occupying the house.

“I supposed it all began around 1980,” Raymond Southern recalled.

“I owned a terrier cross named Johnny who was my constant companion. One night he sat up, his small body rigid, and stared intently at the bedroom wall. He seemed mesmerized. I tried to distract him, but he paid no attention to me. Then he growled at the spot! Johnny was a bright dog, really above average. He was obviously aware of a presence in the room that I could not see. Anyway, this strange episode began repeating itself, I wouldn’t say every night, but certainly once or twice a week.

“Then came the night I will never forget. I have never been so scared in my life! I was going to bed and I felt a hand brush up my arm and squeeze my shoulder. I spun around and there, only feet away, stood the figure of a woman in a black robe! She had long wavy reddish hair. Her face was not distinct but sort of blurred, as if I was seeing it through water. The strangest thing of all is that she was standing right where Johnny had been staring when he became agitated during the earlier episodes.

“The experience unnerved me so much I literally ran out of the house, leaving the lights on, television going and, probably, the door unlocked! I spent the next few nights at my mother’s. I never saw the strange woman again, but odd things continued to happen.

“Over a period of time I started noticing that certain of my rings would go missing for days. They always turned up in the end, but in the most peculiar places. Usually I would find them resting on the top edge of an open door. Several times I found them neatly fitted over the candles on the dining room table! I’m still baffled by all the strange goings-on I witnessed while I was at Inlands.

“Do you believe in ghosts? Well, unless someone proves that they don’t exist, I will – always.”

During the 1950’s a Hamilton businessman and his wife were living at Inlands and, to this day, they swear that what they experienced there one night had to have been a ghost. Soon after going to bed that particular evening they heard the sound of heavy footsteps.

“Do you hear that?” whispered the husband.

“I certainly do. Someone is walking through the living room!” the wife exclaimed.

Immediately, the husband jumped out of bed and, arming himself with a poker, headed for the bedroom door. All the while the footsteps were coming down the corridor, then stopped directly outside the bedroom door, he lunged forward, ready to strike the intruder, but…nobody was there! He was completely taken aback because no more than a second before, the footsteps had come to a halt. There was no time for escape and yet the space was empty, figuratively speaking!