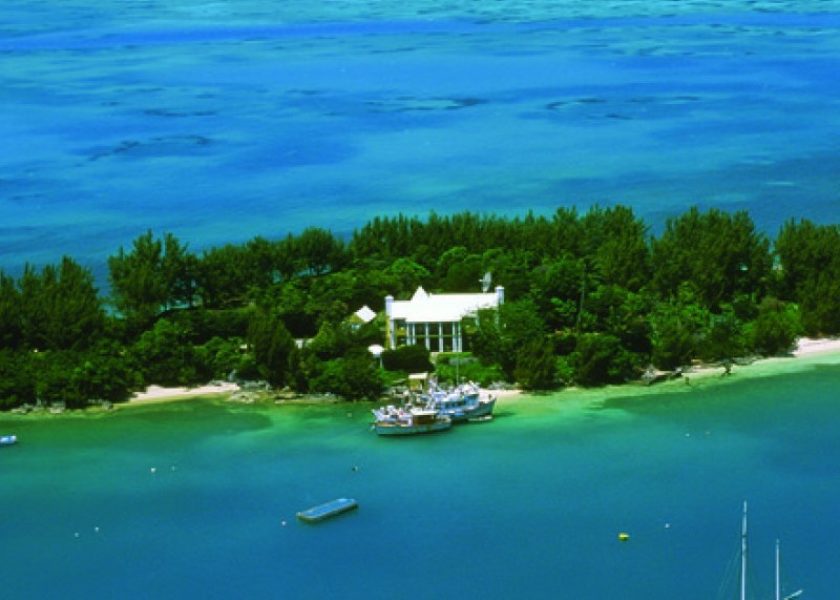 King’s Point is the home of (now deceased) Teddy Tucker, internationally known for his underwater venture, knowledge of the sea, and many successful treasure dives around the reefs of Bermuda, and his wife Edna, who is a gracious hostess and friend to an endless parade of guests from all over the world.

Out on the point overlooking the turquoise brilliance of Mangrove Bay, stands an old homestead with an interesting past and fascinating present, couch in the mysteries of the sea…here is the home of two wonderfully in-tune people whose lives intermingle with the ghosts of the deep, and the seductive Lorelie of the reefs. Within the wooded privacy that surrounds the house, time recalls in its stillness the tragedy of a disturbed suicide whilst the household itself contains entities who all but pull up a chair at the kitchen table when company is present.

Now, an animal’s sixth sense is seldom questioned and in the area of the unseen, their ability to see is remarkable. Shortly after moving to King’s Point, the Tucker’s standard schnauzer, Mitzie, introduced them to the reality of their newly acquired resident ghost. Not that Mitzie objected to its existence so much – rather it was on-again, off-again quality of this uncalled-for entity that must have annoyed her. All set for a good display of raised hackles and guttural snarls, the visitation seemingly departed without a fight. If it would stick around long enough the uneven relationship might be resolved, after all that’s a lot of steam to get up for nothing!

“Looks like we have a ghost around here!” was Edna’s laughing observation.

History points to a sad and jilted sailor who, in his disgruntled vexations, paid a final honour to a maiden of his choice. Unable to face her rejection of his proposal, he hung himself on an overhanging branch in the woodlands behind King’s Point. It is believed to be his mortal remains that are buried nearby, there to rest for all eternity. Whether the fair young maiden was suitably impressed by this dramatic exit and how she directed her life thereafter, is not known but it doesn’t appear that her phantom is pacing the woods in perpetual or even periodic remorse.

Today, it is only the tragic young man of yesteryear who trips through the door, crosses the living room and sits firmly on the antique brocade sofa. He seems agitated as if waiting for someone or something. His attire is of the early 1700s and none too clean. He disappears only to repeat the performance over and over again through the years. On one occasion, Edna decided on a move that would trick either her senses or those of the etheric guest – she moved the furniture! Chairs and tables were shifted and the sofa was transferred to an entirely different wall, opposite the ritual path. In due course “he” arrived and with the briefest of pauses, did a deft turn and settled into the sofa as usual.

Makes one wonder if the antique sofa itself was the source of the haunting, rather than the house.

Fun and games abound here. The flesh and the spirit are separate on the one hand and as one on the other. Edna prepares meals and cooks alongside her unseen “helper” who turns on tap and fills glasses, splashing, gurgling – a trickling, giggly sort of experience, for the eyes see naught only the ears tell all.

The atmosphere around us that contains its own recall through time can be selective and if an area is alive with past happenings, there is no limit to the variety of manifestations. King’s Point has all the recognized senses covered in their turn – sight, sound, touch, a moment when a visitor thought her host or hostess had tapped her shoulder to get her attention only to find herself quite a distance away from the others in the group and finally, smell. The latter presents itself in the aroma of roast beef, pungent, and mouthwatering, coming from an empty kitchen at 3 o’clock in the morning when all hands are trying to sleep! Investigation does not serve the palate a longed-for slice of satisfaction – there is simply nothing to be found.

When glass breaks in this house during the night, it shatters. The sound depicts and entire cabinet full of stemware and brandy snifters being smashed in the hallway. The great thing is, you don’t have to clean it up the next morning.

The initial “dry run” of this alarming special effect was delivered in the middle of the night shortly after the Tuckers had first settled in. The unmistakable smash and tinkle of quantities of crystal caused Edna to sit up straight in her bed, thinking the cats had run amok! Teddy Tucker, partially awake and alerted to the alternatives by Edna, elected to face the resultant mess in the morning. This was just as well, since the event was the be repeated regularly over the years to follow, while the crystal in question, remains intact and as useful today as ever.

It is said that during the 1800s, a distraught mother drowned in a desperate attempt to rescue her young daughter who had toddled to the edge of a small dock and fallen into the water. At one point inside the house one gets a sense of an emotional tension still suspended in the atmosphere. Whether this poor woman, in her terror and haste, dropped a tray of crystal as he ran out of the door in a vain bid to save her child, is at least something to ponder.

Edna Tucker recalls with some amusement, a young house guest built like Arnold Schwarzenegger, who slept like a tender babe in arms when visiting King’s Point, “but absolutely refused to turn the lights out all night long!” Edna and Teddy finally ventured to suggest he might sleep more restfully with the lights out. He responded with feeling, “Dammit Tuckers – not in THIS house!”