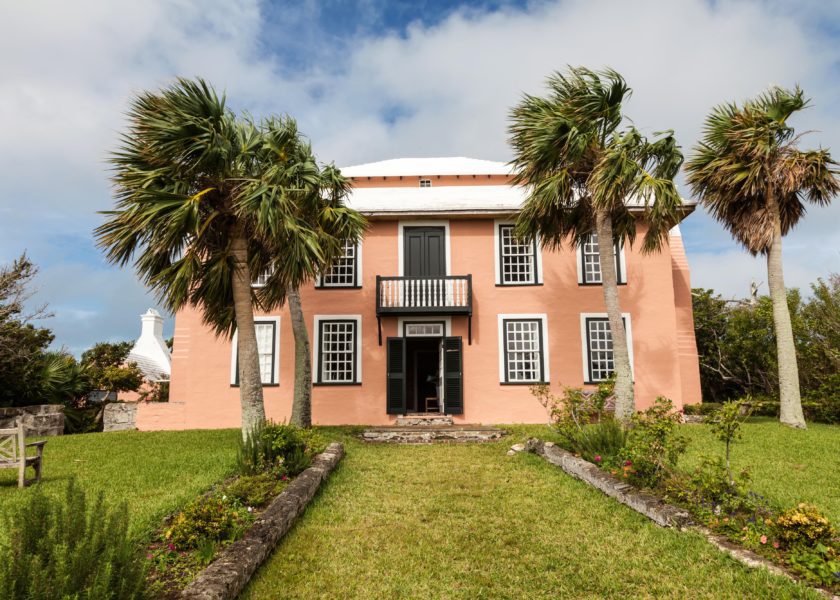 What is it you want to know,” he asked as he strode into my social parlor which serves as an office as well.

“Well, since I am sketching your house for the book, it suddenly occurred to me that there was little point in it if I didn’t have the story to give it purpose.” I replied.

With a reminiscent smile on his face, Richard began –

“Things started as we were moving me in. It was 1987, the year of the hurricane, you know, Emily. With hindsight I can observe what later became the obvious: pre-hurricane weather is somewhat stuffy at best. This particular day was exceedingly hot and breathless. Laying down the first load of boxes, I decided to open all the windows.

“This simple operation turned into a major challenge. After exhausting all attempts at getting the old, swollen and painted windows to budge, we gave up. This job was going to take time, patience and a well-aimed hammer and chisel.

“Back to Warwick I went to reload the car with personal effects and household oddments. An hour or so later, I returned. My friend had achieved wonders, I thought, rejoicing as I hauled the cartons up the walk.”

“I say, great stuff, you managed to open the windows, after all!”
“Not me mate, I haven’t touched the buggers,” was the rude response.
“But who?” I stammered.
“Well you might ask, but no one’s been here ‘cept me and I’ve been unpacking boxes all this time.”

“As this bit of information sank in, we both stopped, looked at one another and uttered a long drawn out ‘Oh ho! We’re off!’ – this, in spite of a compelling air of welcome in the atmosphere. Mind you, I’ve never actually come face-to-face with anything untoward at Verdmont Cottage.

“Once comfortably settled in, my Mum decided to come and check out the new abode. The cottage is small and only has one bedroom, so I opted to do the gentlemanly thing, giving it to mother, while I took to the pull-out sofa in the living room. Mother was exhausted after her journey and glad to retire when the time came, and it didn’t take her long to sink into a profound sleep. We don’t know how long she slept before she was roused by a movement. The foot of the bed was tending to bounce, rising into the air with mischievous insistence, giving mother quite a puzzling reception before dropping her like a stone and withdrawing into a sulky silence. Nothing was detectable except a sense of personality hovering nearby. Gone! But not for long! Mother’s observation was that she felt no fear, just surprise and then an irresistible urge to laugh at this strange sensation that was devoid of any evil overtones.
“What next?” But of course I shouldn’t have asked.

“In due course mother returned home and I resumed my berth in the bedroom. I may say at this point that my bed is king-size and weighty without anyone in it, so imagine my amazement when, as I began to slip into a deep sleep, I got the certain feeling that I wasn’t alone.

“With that, my bed was lifted at the foot and rocked up and down. I was reminded of the rocking-horse I once had as a child. I clutched the bed sheets and gripped the sides. I couldn’t see anything but it was like somebody was playing, tugging at the mattress, pulling on the bed and jiggling at my feet. Not unpleasant mind you, but decidedly unnatural. Whatever it was seemed to want me to rouse myself and join in some fun!

“Come along, it seemed to say, time to get up you lazy clod!”

“There is no question about this entity’s nature – it’s harmless, friendly, caring and perhaps a little bored. I’m not sure that it isn’t a little jealous too at times – at least it doesn’t seem to fancy the ladies, although mother was apparently acceptable, because whenever she’s there, the really playful stuff begins again.”

“A few months after settling in, a young lady-friend of mine came to visit and had the use of the cottage whilst I was away. She felt concerned the very first night because she had the distinct feeling she was not wanted. It was weird. Since she was alone, it would seem unlikely that a confrontation with a jealous adversary was about to take place. Who would one battle anyway? She was on edge continually until my return and left no regrets.”

“In October of 1993, my mother returned with the express purpose of seeing our production group perform in ‘The King and I’. After the show, we returned to the cottage and a much-needed cup of tea. Mother went into the living room to relax, and it was within seconds, I heard her mutter a barely controlled, ‘Oh my God!’”

“I thought, Oh Lord, she’s been hit by a flying cockroach!”

“On the contrary. It was my antique bookshelves that had been suspended on the wall; pinned to it with long dowls and screws. It was intended to stand the test of time and even earth tremor. Lo! There they lay on the floor, their contents – a lavish collection of Waterford stemware, bowls and decanters – no longer lavish and certainly no longer recognizable as the elegant crystal it had once been. Seven years of careful selection lay before me, scattered everywhere, most of it beyond redemption. Old walls? Perhaps, but with all the reinforcements that braced these shelves, I am not sure it’s as simple as that. In any event, exactly one year later, to the hour, everything slid off the wall once more. I did NOT put them up again.”

“Wherever spiritual aberrations occur in houses inhabited by the living, things go missing. So it is in Verdmont Cottage where I have searched endlessly and repeatedly for lost items. Always, when they choose to reappear, they do so directly under my nose! How ridiculous – I couldn’t possibly have missed seeing them – I wasn’t THAT stupid.”

“When another lady friend of mine was house-sitting for me recently, she, unaware of the more spirited aspects of Verdmont Cottage, awoke one night and was absolutely petrified. A crashing sound from the living room was enough to convince her there was an intruder stumbling about in the dark. She called 911 and then, when help was on the way, bravely edged towards the living room, hardly breathing.”

“A hefty framed print was on the floor leaning against the wall. It had done a complete flip out from the hook it was hanging on, missing the figurines standing on a shelf beneath it. Entirely without logic – it should have broken itself by bouncing through valued and valuable ornaments – but instead it had hurled itself into space, by-passing all in its path to land unharmed just beneath its former position on the wall. The hook was intact, and the wire behind the framed print was in one piece…nothing was broke, anywhere!”