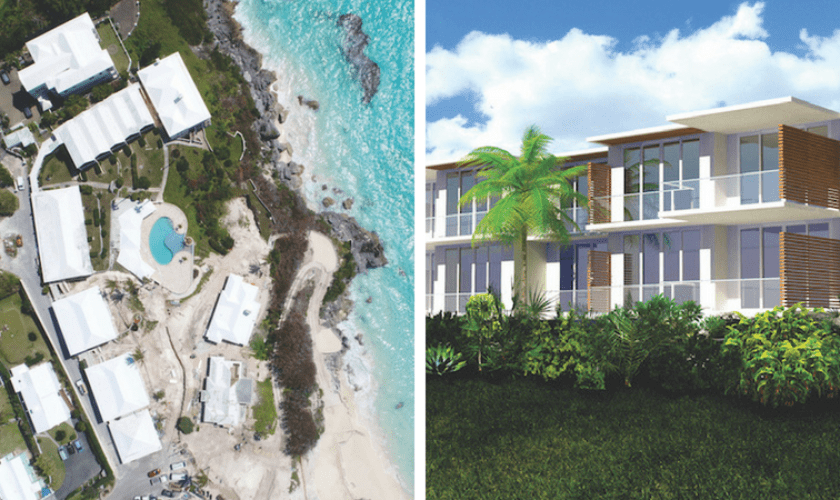 With a near boundless view of vibrant blue ocean and sky, AZURA, which translates to “blue” from Latin, is the perfect name for the former Surf Side cottage hotel that has recently been completely gutted and reinvented as a stunning new boutique hotel and residences. A rather unique concept, the owners of the residences can effectively rent out a single bedroom or their entire unit as part of the hotel programme which earns them both significant tax breaks at the initial stage of purchase as well as ongoing income as they receive nearly 50 percent of the nightly room rate paid by hotel guests.

The Bermudian magazine got a tour in April of the nearly completed units on the busy construction site with the president of Clearwater Development Ltd., John Bush III, and director of sales, Thad Crouch. With the first cottages having been built in the 1930s and the rest of the development dating back to the 1970s and neglected over recent years, the property was in dire need of renovation when the two decided to invest in it. “We decided to take the old girl and transform it into something Bermuda doesn’t have—a hotel residence,” said Crouch. 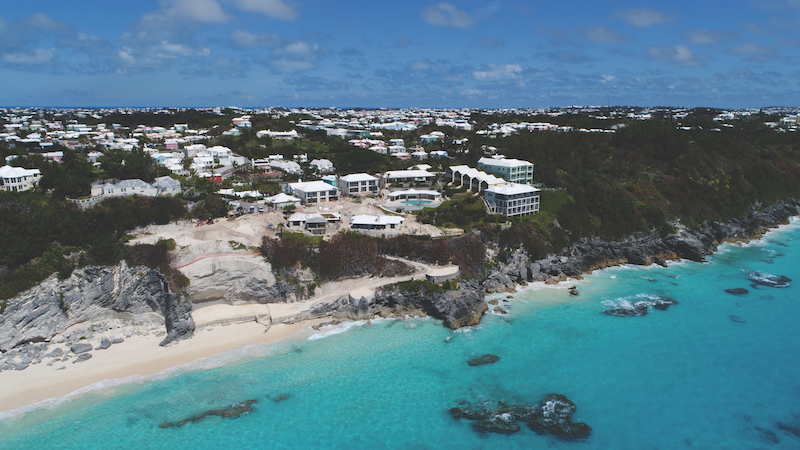 Their first investment was infrastructure, especially the south shore cliff face and seawall which were totally rebuilt. Situated high up on the cliff, the units all have spectacular views and improved access to the private beach area below thanks to a newly created driving/walking path designed for a golf cart to travel down. Cascading faux beaches protected by glass railings along the steep path have also been created to give owners and guests additional access to beach areas any time of the year.

“Our two biggest amenities on this project are the views and nature,” said Bush. “Once you get up here there is an enclave with nature and the cliffs, a private beach and the nature all around which sets us apart. It is kind of a unique place even within Bermuda.”

On the eastern side of the property is the secluded and mostly undisturbed 8.7-acre Alfred Blackburn Smith Nature Reserve which is owned by the Audubon Society and available for exploration by AZURA owners and guests. During our visit, a whale sauntered by just outside the reef line—apparently a common sight in the spring, according to Bush.
Other hotel amenities will include a bistro restaurant, fresh-water pool, gym facility and the Spa AZURA. Typical hotel services—like housekeeping, concierge and laundry services—will also be available to both owners and guests. For overseas buyers, a locked storage area outside of their unit will allow them to store their belongings while they are off-island and their unit is available in the hotel programme. 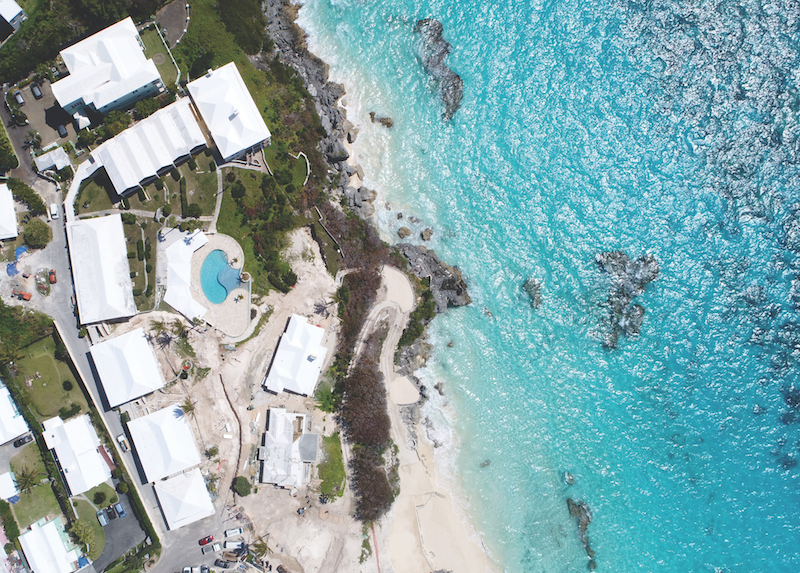 Each bedroom has its own entrance and can be locked-off for use by guests while the owner is on-site. Or the entire unit can be opened up. Each residence maximises the spectacular views with large glass walls and private balconies. The bathrooms even have a glass wall so that the view is never obstructed (although there are also privacy screens for the shyer sort!).

A big portion of the project is focused on green initiatives including energy efficiencies, renovations over rebuilding, and literal green roofs with substantial vegetation over two of the new units which will increase common area space. Each unit is individually metered with all new Belco meters, telephone lines and fibrewire—everything needed for modern living. “We were kind of thinking of pretty much everything for our buyers,” said Crouch.

The first units were due online in early May and the response thus far from both Bermudian and overseas buyers has been overwhelming. “We are a condominium for a person who buys it, but the purchaser also has hotel services and the ability to make income to offset their costs,” said Bush. “We’ve had a really good response to it. We have one freestanding villa that is $2,250,000 but everything else is under $2 million. That is a crucial point to this. We are the only ones doing it right now and the only ones doing it at this price point. It is more accessible for more people. We are 50 percent sold out and we don’t even have a finished model yet.” 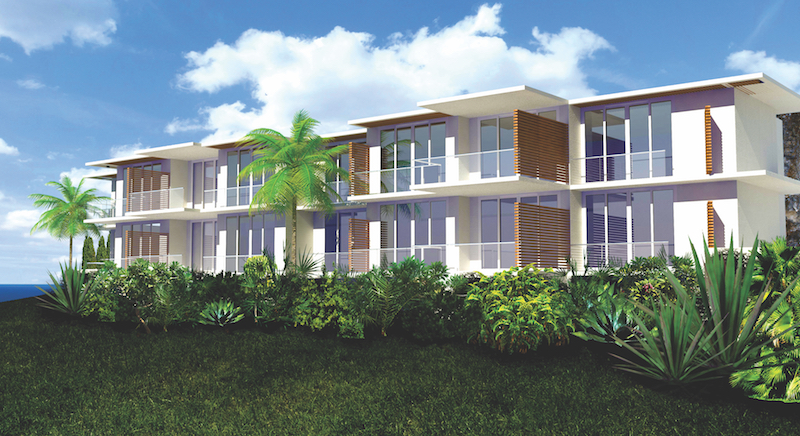 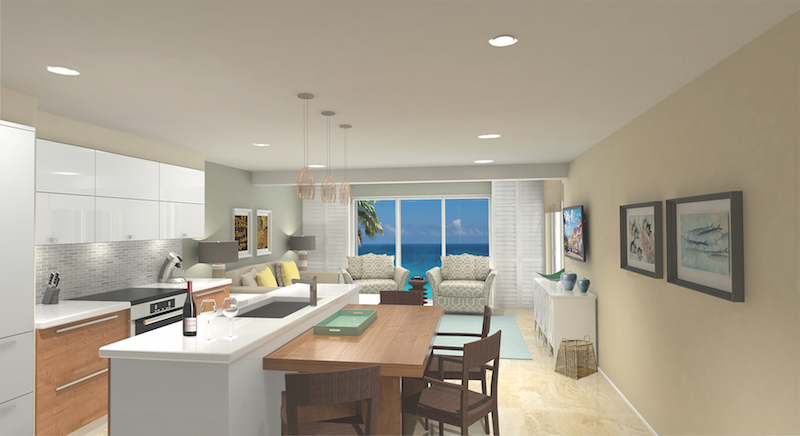 The initial phase, which was bustling with construction activity during our visit, includes 20 hotel residences providing up to 46 bedrooms. Already approved phase two will bring online up to 23 additional bedrooms for a potential total of 69 hotel keys. Initial occupancy by hotel guests is expected to be in 2019 and nightly rates are projected to be in the $275–$475 range depending on season. “One of the key things we are trying to do is build a sustainable hospitality product for Bermuda,” added Bush. “When someone makes an investment both financially and emotionally in a project they want to come more often, they want to send their friends there and they have pride of place and pride of ownership. And they will recommend friends to stay in the hotel component. They then hire taxis, eat in restaurants, etc. It is a win-win for everyone.”