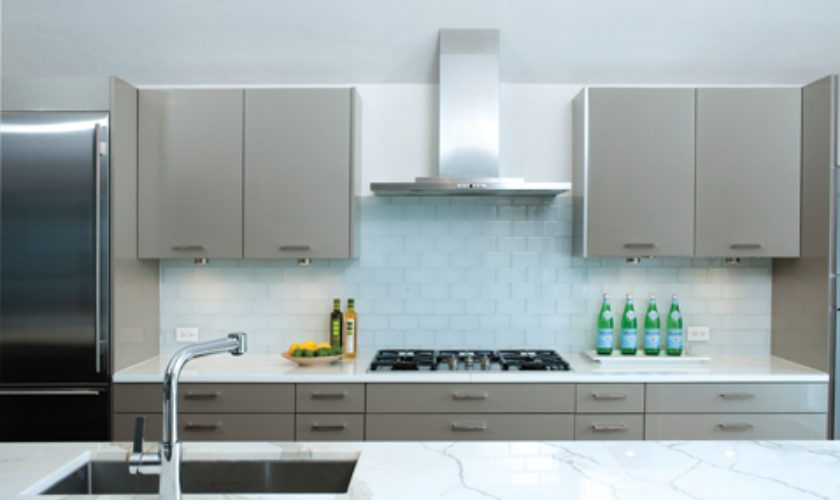 A contemporary, open-plan interior opens onto a patio overlooking the South Shore, blurring the line between indoors and out and creating a kitchen and living space that is both beautiful and functional.

Most people design their dream kitchen first, poring over magazines and scouring the Web for inspiration, and then build it within those specifications. In the case of Looking Stead, it was the opposite: the final architecture determined the style and overall look of this contemporary kitchen.

Looking Stead was originally a rabbit warren of unlivable rooms, so the architects at Westport Architecture changed the structure of the ceiling to open up the entire living area (something they are renowned for), and this led to the final design of the kitchen space.

“Once the interior was transformed, it felt twice the size, and we hardly increased the square footage,” says Tripp West of Westport. “We didn’t start to really think about the design and style of the kitchen until we saw the interior space. The owner had remained pretty classic throughout the project, with some contemporary accents selected, but it wasn’t until the walls were plastered and the windows in that we really decided on a certain style.”

Ideal for entertaining, the single expansive room contains the kitchen, living and dining areas in an open, free-flowing space that has easy access to the generous lawn and spectacular ocean views. “The space, the view and the flow of the property made it clear that it was going to be that style of open kitchen,” says the homeowner. “[The architects and I] had a similar vision of a very open kitchen that was part of the living space, and the idea was to have it as an integrated entertainment area because entertainment always revolves around the kitchen.”

Looking to complement and not compete with the view, the designers at Westport worked with Waterwood Design Supply on selecting finishes and fixtures that would give the space a light, monochromatic look. High-gloss metallic, flat-panel cabinets in champagne were chosen to give a reflective and dressy effect and complement the American black-walnut flooring. Waterwood supplied both. “This space became more contemporary and minimalistic, but the colours make it warm and intimate,” says West.

The appliances – including a top-of-the-line SubZero integrated refrigerator/freezer, extra fridge drawers, a SubZero built-in wine fridge and Miele cooktop, hood, oven and dishwasher – were chosen not only for their functionality but also for their sleek, built-in look, according to Gregory Tolaram of Waterwood.

“In addition to the integrated extra fridge drawers, the kitchen features a number of accessories that make the kitchen highly efficient,” says Tolaram. “The accessories include deep-drawer organization dividers, adjustable dowel inserts for holding pots and pans, plate holders and cutlery and multipurpose inserts for shallow drawers. There is an integrated, hidden trash pull-out and hidden internal drawers concealed behind doors, allowing for a more streamlined appearance on the exterior.”

While the majority of the kitchen – including the glass subway tiles on the backsplash and the white Glassos countertops surrounding the cooktop – is clean and minimal, the breakfast bar is a statement piece that is not only stunning but also highly functional for entertaining. With a hint of tradition, the gorgeous Calacatta marble slab was installed in a more contemporary way, with waterfall extended sides creating a functional eating place as well as an attractive hangout for the client’s extensive entertaining, according to Tolaram. Surface Trends supplied both countertops.

“I wanted a beautiful surface on the island, and the designers did a great job sourcing that,” says the homeowner, who is also thrilled with the double doors that lead directly from the kitchen to the patio. “The meals for most of the year are served out on the patio, so the doors from the kitchen out to the patio help to further enhance the lifestyle of that kitchen. I wanted a beautiful and very practical, functional kitchen that not only looks great but is easy to cook and entertain in, and that is exactly what the result was.”