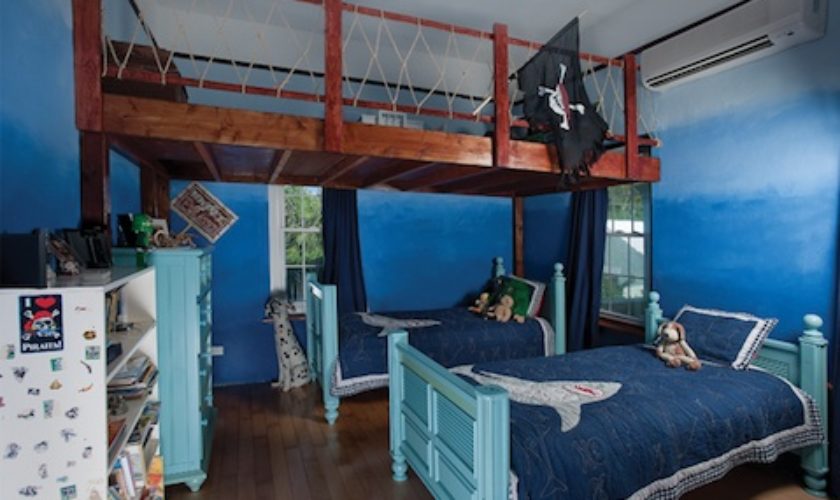 Shiver me timbers! This pirate-themed room for eight-year-old Rory was cleverly designed by his mum, Nicola Lucas.

“Rory wanted to move into our spare room about a year ago and wanted us to ‘do it up’ like a pirate ship,” said Lucas. “We compromised as we wanted it to last him for many years and went for a pirate/ocean theme. I wanted to build the loft as we have such high ceilings and I wanted to get all his Lego off the floor. This gave him a place to play with his Lego – and other toys – where he could leave it spread out. He manages to keep his room tidy down below but I try not to look up the top too much!”

The loft was custom designed and built by Lucas and her husband, Ben; Lucas painted the ombre walls herself using paint from Pembroke Paint. “The ombre effect was achieved by choosing three colours then adding white to each, painting the darkest colour and then gradually blending each subsequent shade into the previous colour.”

As for the rest of the room, the shark-print duvet covers and the deep blue curtains were from Pottery Barn Kids and the teal blue beds were from Young American. “We have had them for several years; they were bunks but Rory preferred them as single beds,” said Lucas.

There will certainly be no walking the plank around here as this young pirate has a perfect space to enjoy for many years to come.

Charlie and the Whales